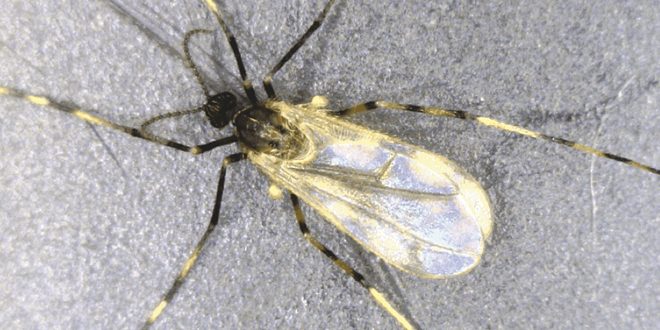 Over the years, many Ohio farmers have adopted an Integrated Pest Management (IPM) approach when it comes to protecting their soybean crop. With assistance from Ohio State University Extension entomologists, certified crop advisors, and ag retail agronomists, farmers have implemented the practice of regularly field scouting and insect identification, which are key first steps in crop protection.

Familiar insect pests such as: soybean aphids, brown marmorated stinkbugs, or common defoliators such as bean leaf beetles, Japanese beetle adults and grass hoppers, are regularly scouted for during the growing season. Scouting for the unknown pests however, is not typically done by farmers.

A few years ago, a new insect pest was found infesting soybean fields in Nebraska.

“This new pest had never been seen before, and an insect taxonomist had to help make the formal identification to determine that it actually was a new and not a previously named species,” said Kelley Tilmon, associate professor and State Specialist for field crop entomology at The Ohio State University. “Since that time, the soybean gall midge has been identified in Missouri, Iowa, South Dakota, and Minnesota. It has not been found east of the Mississippi River.”

“The soybean gall midge larvae damage crops by feeding on the inside of the stem, cutting off the vascular flow,” Tilmon said. “There can be a dozen or more larvae per stem. The larvae feeding disrupts the vascular flow and causes the stem to become brittle at the base. This can lead to lodging, and ultimately kill the plant.”

Research, funded in part by check-off dollars from the Ohio Soybean Council, and North Central Soybean Research Program, is being conducted to learn more about this new pest. Researchers think that the soybean gall midge overwinters as a larva in silken cocoons in the soil. In the early spring the larva pupate and eventually the adult midges emerge.

“When the adults emerge, they migrate to a neighboring soybean field and lay their eggs in the base of the soybean stem,” Tilmon said. “Once the eggs hatch, the larvae feed inside the stem. Feeding damage typically occurs in late June.”

Knowledge of what to look for when scouting is important.

“The adults are only in the field for a short time. Their average emergence period lasts about two weeks, and are not easily detected without an emergence cage,” said Justin McMechan, assistant professor of entomology, and Crop Protection and Cropping Systems Specialist for the University of Nebraska-Lincoln. “It is the feeding damage that is first observed when scouting. It is observed as a blackening on the stem from the soil line to about 1.5-inches above the soil surface, about where the cotyledons are.”

While much information has been gained, there is still a good deal to be learned about the soybean gall midge. Research from the North Central Soybean Research Program indicates that this pest may have been in Nebraska back in 2011, based on the symptomology observed. It belongs to the same family as the Hessian fly and wheat midge. Early on, it was only identified to the genus, but in 2018 was described as a “new” species.

Midge infestations have occurred in soybean fields in the past, but were assumed to be a secondary infestation after plant sustained injury caused by hail or disease. In 2018 and 2019, soybean gall midge infestations were observed earlier, in higher numbers, and often in the absence of other injury or disease.

“Based on 2019 observations, it is estimated that there are two full generations per year with an additional generation that overwinters,” McMechan said.

Several questions still remain regarding the management and control of this pest. What is the efficacy of seed treatments on this pest? Is a foliar applied systemic insecticide effective? What are economic threshold levels, and what is the correct application time or growth stage? Does the soybean gall midge favor specific varieties of soybeans? Does planting date play a factor in susceptibility? Are there other host plant species? Is there any known genetic resistance that is naturally occurring? Are there any natural predators? Will the pest migrate to the eastern Corn Belt, and how quickly could we expect it in Ohio?

“With funding from the Ohio Soybean Council and the soybean check-off, I am developing an information and identification postcard for farmers that will be available and distributed across the state later this year,” Tilmon said.