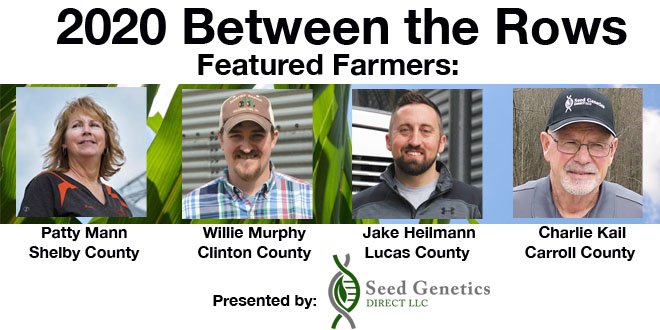 We had a pretty big rain the week of June 4 and since then it has been hit or miss. Since then, it has gotten really dry. This weekend where the corn was stressed it was starting to roll up a little bit. If we don’t get rain here relatively soon it is going to start being a problem for the crops. We did get around 2 tenths last night and there is more rain in the forecast today.

Once we got planting wrapped up, everything emerged well. Compared to the last couple of years that have been pretty stressful we are very happy with the way our crops look. We did finish sidedressing all of our corn this past Friday, so we are ready for it to set in rain for a little bit.

The wheat is getting close. We are hoping the first of next week we’ll be able to run it. We did run our barley on Tuesday, June 16. The moisture was 13.5% to 14% moisture, which is just where they want it. The yield was 15 to 20 bushels off of what it has been averaging in the past. We did not spray fungicide on the barley. About the time when we should have sprayed when it was flowering is when we had the frost and it got down to 25 degrees. We have not checked the protein levels yet. One field made 65 bushels and one farm made 80. The only difference was they are about 5 miles apart and one was topdressed about 10 days later than the other one. We don’t know if the better field was not as far along when it was frosted or maybe one field got a harder frost. Normally we raise 85- to 100-bushel barley. We did find some significant head scab and there were blank hulls with no grain in them. We don’t know if that was from head scab or frost. The test weight was lower than it normally is too.

We baled 168 acres of first-cutting hay. The last hay we did was a 32-acre field and we took 176 4X6 round bales off of the field, so it paid to wait a little longer. The relative feed value is significantly higher than last year.

We got rain last night. We had been spotty, but last night I think everybody got a dose around here. We needed it. We had beans that were not coming up too well because it was so dry.

Marestail is growing and we may not have XtendiMax to clean it up. There is way too much of it sitting here in the mill. We are sort of in a bind here if you were dependent on this to finish cleaning those bean fields up.

I played around 3 or 4 years ago and tiger striped my soybean field right by my house with metribuzin at different rates. I had a section through the middle with no control and there was a good stand of marestail there. My idea was to see how much marestail the combine could handle before it started losing beans out of the back. It doesn’t have to be too thick. If you have four of five marestail plants going into the combine all the time, that is all you need to get rid of that fuzzy dust out the back. When you get rid of that, the next thing you get is beans sticking to the stems and walking out with them. This year, if you don’t have LibertyLink beans you could have a mess.

We are 98% done with planting around here. I have seen some cutworm take off a bunch of plants but the growing point was still below the ground so it didn’t really bother them. There are some drowned out spots in the fields but most of them don’t justify replanting. I think we have a decent crops standing out here. If we can keep these fields fairly clean and if Mother Nature keeps giving us rain, I think we’ll have a decent yields.

It is unbelievable what 22-degree temperatures can do to set back an alfalfa plant. Last week the alfalfa was in full bloom. That is 3 weeks late. It made us some really good hay, but the yields are not as good as they usually are. First-cutting hay is probably 75% made.

We got a little rain over night, maybe we got 3 tenths. We were getting dry and it sounds like there is more on the way tomorrow and this week.

Everybody is having challenges around the state. The guys up north, who didn’t get anything planted last year and got an early start this year, they are dry and their grass is totally brown already. The guys down in central Ohio who are usually early were a lot later this year. I have had so many people tell me that it is not as bad as last year, but you know what, it is still not good. It is just different challenges with the weather, the prices and COVID.

Our latest beans we finished up with were sitting in the dry dirt and this rain was definitely welcome. I don’t think we were hurt by the dry weather but this rain came at the perfect time. The early corn is canopied over and we could use the water now. The corn is in the rapid growth stage now and is starting to get a deep green color and looking really good.

My daughter has been out scouting. She is our agronomist and she hasn’t found any armyworms in our fields, but she did find some in Marion County crossing the roads from a wheat field to a corn field. We have been hearing reports about the damage they do and they are out and about.

We have all of our bigger corn sidedressed and sprayed. We had two planting seasons again this year with early corn and later corn. This rain has kept us out of our later corn and we’ll finish as soon as field conditions permit.

Basis improved again here last week and we are up another 10 cents to 25 over and that was good to see. Prices are creeping up as well and it is good to see that too. Hopefully we’ll get some marketing opportunities here in the next few weeks.

June 30 is the deadline for the National Corn Yield Contest and I would encourage everyone to submit an entry for that. It is a fun contest to test your skills and see how good of a corn crop we can produce.

We had a quarter inch at my house and less than that at the farm. We had over an inch in the June 10 storm that took down a theater in Sandusky. We had no damage and a well-timed inch of rain. It helped our crops tolerate the heat we’ve had and there is hopefully more in the forecast here so we are sitting pretty good.

I would like to see another inch or two of rain, particularly in our sandier soils that do not have the water holding capacity. We get hurt by a drought worse than other areas. Any increased moisture we get now is directly related to yield. I’d sleep a little better if we got more rain, but nothing is really dire. We have gone through enough lengthy periods without rain that the crops have rooted down really well.

We had some seed customers who planted corn into some rye cover crop. After the cover crops were killed, the armyworms moved from the rye to the young corn plants. After some more scouting, they showed up in wheat fields. They were fairly easy to find in our fields so we ended up spraying the end of last week. We caught them early because of the damage they had further south. We kept a close eye on them for about a week and we thought we’d better pull the trigger and get them sprayed.

The wheat looks to be slightly early, maybe ready for harvest around the Fourth of July. We had a third party approach us about baling the wheat. Our main reason for growing wheat is to install drainage tile, but that baling money definitely helps.

We were seeing some nutrient deficiency symptoms in some of the corn. Some of the heavy rains we had drove the starter nutrients a little deeper in some of our corn stands. The nutrients were there but out of reach for the root systems at the time. It took some time for the root systems to catch up and now the plants have greened up. The growing conditions were optimal and the plants were struggling to uptake all the nutrients they needed. Things look as good as could be expected.

Progress in planting made between rains

Willie Murphy We had a little more rain than some other areas. We’ve had one …