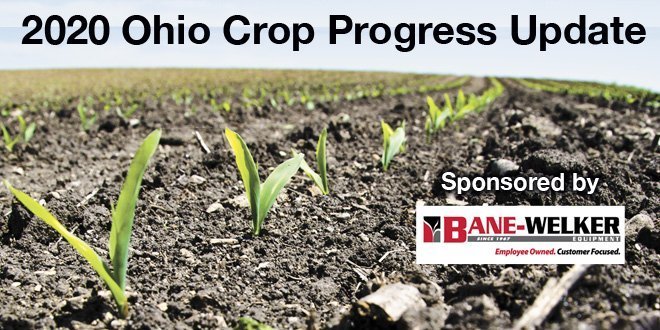 Rainfall increased throughout the state at an opportune time, causing soil moisture to improve, according to Cheryl Turner, State Statistician, USDA NASS, Ohio Field Office. While precipitation increased overall, dry weather continued in a few areas of the state. Topsoil moisture, however, increased from 53 percent adequate or surplus last week to 69 percent adequate or surplus this week. Average temperatures for the week were approximately 1 degree above historical normals, and the entire state averaged just over 1 inch of precipitation. There were 5.2 days suitable for fieldwork during the week ending June 28. During the week, farmers side dressed nitrogen on corn and applied herbicides to corn and soybeans. Winter wheat continued to mature while reporters continued to anticipate the start of harvest. Soybean planting progress reached 100 percent, ahead of the five-year average by 5 percentage points, while soybeans blooming was 11 percent. Corn emerged progress was 100 percent, 4 percentage points ahead of the five-year average. Sixty-three percent of corn was considered good or excellent and 74 percent of pasture and range was considered good or excellent compared to 38 percent the previous year.