Home / Crops / Armyworms may still be at work in fields 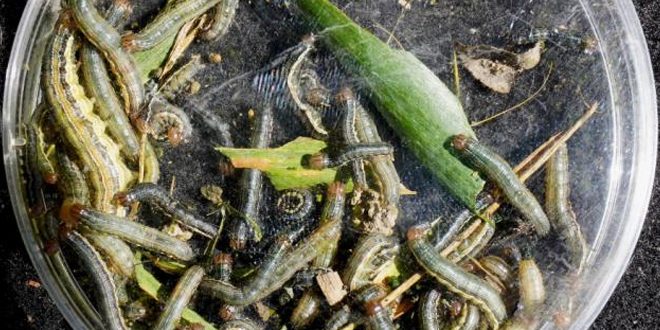 Armyworms may still be at work in fields

We received many reports of true armyworm infestations in wheat, barley, and corn. These are black or green caterpillars with stripes along the side and orange heads. In the spring, true armyworm moths migrate from the south and lay eggs in grasses such as forage and weed grasses, winter wheat and barley, and rye cover crops. When the eggs hatch, the larvae can significantly damage wheat and barley before then moving to young corn. Usually, moth flights occur in April, but we may have had a second peak the first or second week of May—it’s likely the caterpillars feeding now are from this later flight. Right now, wheat, barley, and corn should be inspected for true armyworm populations. Armyworms like to hide during the day and feed at night, so scouting should occur at dusk or dawn, and/or on cloudy days.

True armyworm in corn cause the most damage when planted in no-till grassy fields, such as a rye cover crop. In this case, after feeding on the cover crop, the caterpillars shift onto the emerging corn. The name armyworm comes from the caterpillars’ behavior of migrating en masse from one location to another. Thus, one should pay particular attention to cornfields adjacent to wheat fields that may have supported a high armyworm population, especially the first several rows into the cornfield. As the wheat matures and dries down, it could stimulate the caterpillars to move.

One may only need to treat the edge of the field closest to the wheat field from which the caterpillars are marching. If armyworms are found in a cornfield, check for the percentage of plants damaged in 5 sets of 20 plants. If more than 10% of the stand has feeding damage, it may indicate a large infestation, and the field should be re-checked in a few days to see if defoliation is increasing. If defoliation has increased and plants have two or more caterpillars per corn seedling, an insecticide application may be necessary. However, if most larvae are longer than 1 inch, then much of the feeding is complete as the caterpillars will begin to pupate. Also, look for the presence of diseased (black and shriveled) or parasitized caterpillars (having a few or several small, white egg cases on their body)—if found, do not include them in your counting.

If defoliation exceeds 50%, even a rescue treatment may not recover the field without a significant impact on yield. According to the Handy Bt Trait Table (https://agrilife.org/lubbock/files/2020/02/BtTraitTable_FEB_2020.pdf), only the Vip3A (e.g., Viptera) Bt trait is effective against true armyworm. Insecticidal seed treatments may offer some control but can be overwhelmed with high populations. Plus, insecticidal seed treatments last only about 4 to 6 weeks after planting.

Wheat, barley, and other small grains

Examine a 4 square foot area in 5 locations throughout the field. If the average of caterpillars less than 1 inch long is greater than 16, or if head-cutting is occurring, treatment may be necessary. Keep in mind that more mature wheat can tolerate a lot of armyworm feeding. Fields defoliated in Feekes 11.3 growth stage will suffer less yield loss from those defoliated at earlier growth stages. As with corn, watch for diseased or parasitized armyworms.

True armyworms CANNOT survive on soybean. They are grass feeders, and any broadleaf plants are a poor food source. Spraying soybean for true armyworms are not needed.

Many foliar insecticides are available for control of true armyworm. If applying in small grains, be careful of the pre-harvest interval (PHI). A long PHI may prevent a timely harvest.