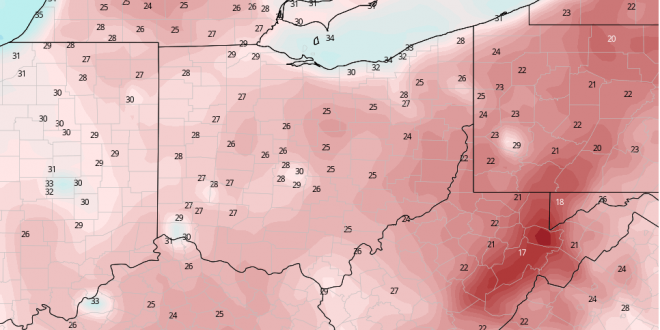 Scattered showers move through Ohio today as colder air blasts into the region. Most of the precipitation that comes through today will be liquid, but as the temps get colder, we wont rule out a few wet snowflakes, especially in eastern and northeastern parts of the state. Look for rain totals of a few hundredths to half an inch over about 70% of Ohio today. Areas from I-70 north will generally be a few hundredths to a tenth or two, while the .2″-,5″ rain potential will be south of I-70, especially far south. the northern third to quarter of Ohio has the best chance of missing out on precip, but we still wont rule it out. 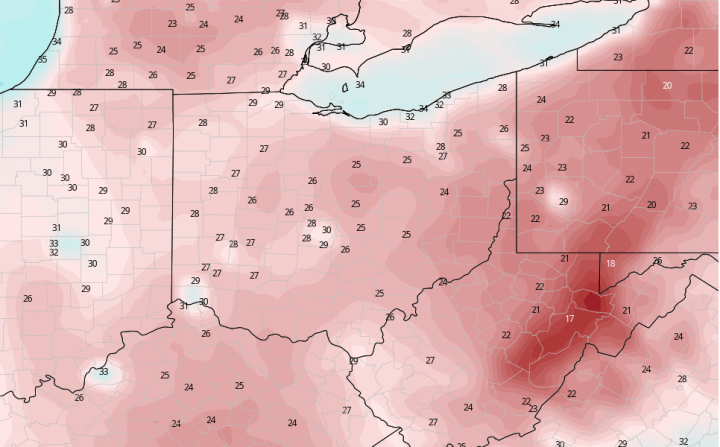 The other story today is the cold air blast that is coming as we clear out overnight. The map at right is low temps tomorrow morning. Strong Canadian air flow settles in across the Great Lakes, and we will see frost and freeze conditions over all of Ohio. Temps easily make it into the 20s overnight tonight, and in come cases will bottom out in the mid 20s. Additionally, we fall fast once we clear, and that means many areas will be looking at many hours below freezing, and several hours under 28 degrees. Cover your tender vegetation and gardens, and this will also slow growth of newly planted/emerged crops too. It will be the coldest overnight tonight.

Tomorrow sunshine dominates all of Ohio, but temps are slow to move. We should be a couple of degrees warmer than today, just thanks to the sun. Clouds are back tomorrow night with scattered showers likely on Sunday. Rain totals will be .3″ or less with coverage at 60%. A few of those showers will linger into Monday morning and midday before ending. The balance of Monday and balance of the state will see a mix of clouds and sun to start the week. Sun and clouds in varying degrees will be around through most of the rest of next week. Temps will be cool to start the week, but will moderate toward mid week, and will be near normal as we finish out.

Clouds increase Friday, and we cant rule out scattered showers again. The rain totals are not impressive, mostly a few hundredths to half an inch. Coverage is expected to be around 70%. Another wave of moisture is likely from I-70 south on Saturday the 16th, but we stay partly sunny over the northern part of the state. Full sunshine finishes the 10 day forecast window next Sunday, the 17th. Temperatures look to be above normal.

The extended period is up for some debate, but we are trending our outlook drier. Models are in disagreement, with one suggesting shower and/or thunderstorm potential every day, and another model saying far less precipitation potential. Given the way the pattern is unfolding ,the answer is probably somewhere in the middle, as we are seeing a slightly more active precipitation track over central and southern parts of the eastern corn belt. So, we look for 1 frontal complex in the extended period, but otherwise a continuation of a drier pattern in the north, and near normal precipitation pattern in the south. 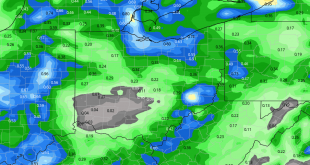