Home / Crops / Hay and straw: Labor of love? Or love of labor? 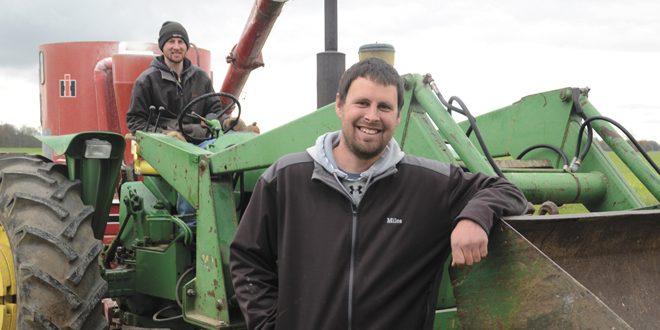 Baling hay and straw is a labor of love for brothers Miles and Caleb von Stein that requires a love of labor they’ve had since high school.

“Growing up, Caleb and I loved baling. We did it for our FFA SAE project. We started with 20 or 40 acres of straw. Dad and my uncle said we’d never get it all baled,” Miles said. “That was in 2010 and it almost was a personal challenge and we tried to do more every year. Then they didn’t think we could do 50 or 60 acres and now we are doing 600 or 700 acres. The fact that they thought we couldn’t do it almost fueled us even more to grow.”

Small square bales of hay and straw have paved the way for the von Steins to take their Hancock County family farm in a new and innovative direction focused on soil health, high quality products and meeting unique customer demands.

“It is a good thing for a young farmer to get started. We started with straw because we didn’t need our own acres to do it,” Miles said. “We do nearly 30,000 bales of hay and maybe 50,000 bales of straw a year. We get called idiots all the time for handling these idiot cubes that some people call them, but it is sort of the last frontier of farming where you can start out. It takes a lot of work and established farms don’t want to mess with it. There is no government involvement so it is a pure, quality-based supply and demand product. If I do a really good job, I get paid really well.”

With small square bales especially, labor is a huge issue.

“At first, labor was our biggest problem. That is when we got the accumulators and bought skid loaders and recently added a telehandler,” Miles said. “But it is hard to expand and not have storage. We have three big pole barns now for storage and we just finished a loading dock so one person can load semis. We have just grown by word of mouth and started with a good customer base.”

As they added equipment and facilities, the von Stein brothers found they could cover an impressive amount of ground.

“Last year we did 800 acres of straw and 120 acres of four cuttings of hay and another 150 acres of clover hay twice, plus some more custom hay. We used to bale up in Wood County, down in Hardin County and everything in between. More recently we have focused more on our own stuff. Doing custom work was a good way to pay for our investment and getting our foot in the door,” Miles said. “We’ll mow, even right before a rain storm because it won’t hurt it that day, then the next morning we can ted it out and speed up the drying process. We’ll ted it once or twice and then we rake and start baling. For the most part, baling day is the only time when you need a bunch of people. Six is perfect but that doesn’t usually happen. Caleb works full time for Ball Metal and I work for Beck’s Hybrids and drive school bus. Right now we have one person part-time working for us. Our parents help, our wives jump in and drive, a father-in-law helps too. For the most part it is all family. There is a lot of work at 3 a.m.”

The hard work pays off when they can produce top-quality hay.

“The biggest part is making quality product and it just starts selling itself,” Miles said. “It is mostly word of mouth. We pretty much haul everything in about a 3-hour radius. Anything further we either hire or they will come get it. We are sending more out in van trailers too.”

The equipment they use is vital for the production of high quality hay.

“Quality is our number one thing and when it is go time we can cover the acres quickly. We run two small square balers. We try to trade in for new every three years so we don’t have problems with them. We run two 18-bale accumulators behind them and two grapples to pick bales up and one in the barn on the telehandler to keep stacking. We have built enough wagons and we have trailers so we can put about 3,000 bales on wheels. This year we just got a 10-basket tedder that is 36 feet so we can cover some ground with that and we run three rotary rakes,” Miles said. “We run aftermarket rollers on our mower that crush the whole length of the stem and we can normally knock a day off in drying time with that. The rotary rakes help fluff it up more. Our goal is to always make hay in three days and most of the time we can. Then we have moisture testers on the balers and we use Silo-King, which is a dry powder we put on through tubes in the bale chamber. Acid will leave a smell that we don’t like. This is a natural bacteria that uses the oxygen up before a mold can get started. It works, though the acid is more forgiving.

“We also bought a wrapper last year. We do put oats in when we first seed alfalfa. Normally we wrap that first cutting and we have some dairy farms that want that for heifer hay. And, if rain is coming I’d much rather wrap it than have it get rained on.”

The weather, of course, is also a crucial factor in high quality hay.

“Humidity is huge because the color of the hay is so important. If you get one night with a heavy dew, it can really steal your color. Once the stem gets dry and you let it go one more night, you go from really green hay to brown and you can lose $100 a ton. It is still good quality, but most people buy on color,” Miles said “You want it soft, you want leaf retention and you want good color. If you ar

e at a hay auction and there are 100 loads, you are just naturally drawn to the green loads. We really watch humidity levels and how much the air is moving. That is a big a part of making good hay. If we see three or four days of low humidity we’ll mow a bunch. If there is 60% or 70% humidity you can get pop-up showers out of nowhere and lower humidity is just a safer environment to mow.”

“Most of our hay and straw is on higher ground. Controlling water is half our battle. Alfalfa does not like this wetter weather, but we have been happy with our yields the last couple of years for our alfalfa/orchardgrass mix,” Miles said. “We are pretty much going to the horse market and that is what they want. They want high quality, soft hay and straight alfalfa can be tough to make into soft hay.”

In the month of July, the von Stein focus turns to straw.

“Straw is like a marathon. We are trying to get 4,000 bales a day, which is a lot to average. Our goal is to mow first-cutting hay early enough so we can mow second cutting in late June and that gives us most of July to get straw done before third-cutting hay in early August. That usually doesn’t quite work and we just do the hay in there when we can,” he said. “This last year straw prices were just crazy. Last year there weren’t many wheat acres and the straw yield was down too. Normally we get 90 bales per acre and last year we averaged 55 bales per acre. About half of our straw goes down to Kentucky and the other half goes all over Ohio.”

As the von Stein boys have gotten more established and taken over more of the decisions on the farm, they have added more cover crops and diversified the crop rotation.

“This year, we are doing hay, straw, corn, beans, a little barley, and we have 60 head of feeder cattle and five cows. We do the cattle because we are always going to make some lower quality hay. Something is going to get rained on every year and it doesn’t make sense to ship and handle it, so we just round bale it and feed it. We sell some for freezer beef but most of it is going to Tyson,” Miles said. “We are at 500 acres of corn and beans, 100 acres of wheat, 50 acres of barley and 150 acres of hay. That is our lineup right now. We did the barley as a feed grade to grind for the cattle and then try to get double-crop beans behind it. Next year we may try to go for the malting barley.”

The hay acres are also allowing the von Stein brothers to make the next major change for the small family farming operation.

“We are using the hay acres to convert to organic. We are leaning heavily on trying to go after premium markets. This will be our first year with some certified organic ground. Hay is perfect for the transition. The plan is to have close to half the farm certified organic,” Miles said. “We are not marketing the hay as organic. We are just using it for the organic transition. We use chicken litter on it. We just focus on making really high quality hay and that sells for more of a premium than anything. A lot of people don’t go into organic because you take such a hit on the transition. So far we have been able to transition without any yield hit at all. This year all organic production will be corn. The plan is to rotate corn and beans then back into hay. I’d like to try no-till organic beans into standing rye and crimp it down. I’d like to figure out how to do all no-till organic.”

Weed control will be the biggest challenge moving forward.

“It is not easy and it is a lot of cultivating, but we’re used to tractor time. For weeds in organic, we are going to run a rotary hoe as a first pass when the weeds are barely started, then row cultivate for corn. We want to try the electric weed zapper to kill weeds too. Next year we are hoping to rely on a heavy mat of rye and the weed zapper, and then maybe some walking the fields and pulling or hoeing,” Miles said. “We have been playing with rye on our conventional acres where we still have the safety net of spraying for control. We think we have a good grasp of it.”

Fertility will also be a challenge.

“Poultry manure is a big part of the fertility for the hay. There is a long list of approved products for organic. We plan using a seaweed extract product too for certified organic,” Miles said. “You have to work with little bits of fertility here and there to get what you need. It is a completely different way of thinking now. Now we are trying to work with the soil and we have to think more about a three-year system of what we are going to be doing. It has to be a more thought out process. We are still new to it and figuring it out with cover crops.”
Clearly, the family tradition of labor is going to continue for the von Stein brothers with their love of the farm. 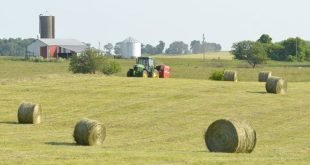