Home / Livestock / The art of the load 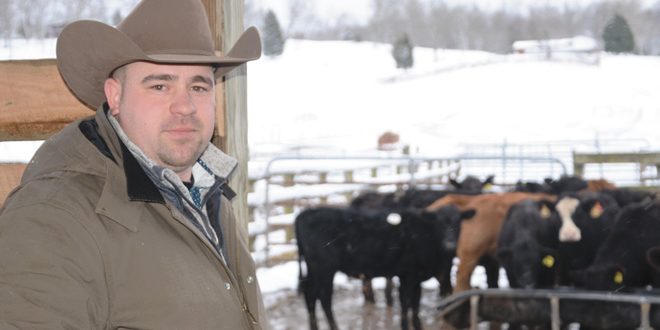 East of the Mississippi, the average farm cattle herd size is less than 20. The often-small number of cattle on Ohio farms creates an inherent marketing challenge: it can be tough to put together a good, consistent load of cattle larger operations need.

This, of course, is where stockyards come in to aggregate cattle from different farms. Ohio Cattlemen’s Association Young Cattleman of the Year, Luke Vollborn from Gallia County, recently started Next Generation Livestock Marketing (NGLM), LLC to provide farms with another option to enhance cattle profitability through the art of the load.

“A lot of farmers in Ohio do not keep big numbers and it is hard for them to put a good load together. NGLM is a service for farmers to get maximum dollar straight off the farm without having to run everything through a stockyard. I buy feeder 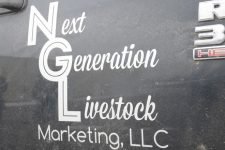 cattle of any size or type and most kinds. In our first year we bought and turned close to 1,600 or 1,700 head of feeders. I buy them, and keep them until they’re healthy, start them on feed and I know I can transport them to where they need to go. I try to keep them around 90 to 120 days. We double vaccinate with a 21-day booster and grow them to whatever specific weight they’re closest to,” Vollborn said. “It is about buying good cattle that come from farmers who take pride in what they are doing, giving them a premium for doing a good job and then taking them just a little further and putting a good uniform load together for a feedlot. That makes the difference. I count on the farm to raise a quality product and then get them resold as a load. I buy several groups and put them together in 50,000-pound loads of 50- to 80-head. We sell to feedlots and to pasture-based operations.”

Through his new venture, Vollborn is building on his rich family history in the cattle business.

“When I was kid, I followed in my dad’s footsteps everywhere he went. I grew up around cattle and I showed cattle,” Vollborn said. “My dad and uncles kept a herd of 300 or 400 commercial cows.”

Vollborn Farms dates back to 1890. In addition, Luke’s father, Fred, was the manager of Bob Evan’s Hidden Valley Ranch for 35 years and his uncle, Ed, worked with beef cattle through Ohio State University Extension. His uncle Ray worked on the family’s farm full time. As Luke’s generation took over, there was a need for expansion to keep the operation sustainable.

“I got a job cleaning at a packing house. I went to college and worked at Champion Hill Cattle Farm for 4.5 years. I learned so much there. Paul Hill was so successful,” Vollborn said. “I travelled to cattle shows and in the summer baled hay and things like that. Then I worked at Bob Evans sausage plant and after that I got a really good job at the coal fired power plant doing shift work.”

Luke then decided to follow his dream a little over a year ago and pursue his passion for the cattle business. It started with buying and selling a few cattle.

“I kept telling my wife I wanted to farm and thought I could make it. I started buying more cattle. We were running 150 purebred Angus cows at the time. That was a year ago. We own 22 acres and lease 400 acres total of all pasture ground. I started trading cattle for fun. I just started posting videos of cattle on Facebook and they were selling as fast as I could post them,” Vollborn said. “Now NGLM cattle go all over the country. It is licensed, bonded and insured with the Ohio Department of Agriculture and USDA Stockers and Packers. I buy from hundreds of outlets. I may buy five head from one guy. I buy a lot off of farms. In the feeder cattle business, I’m sending cattle all over the country. I buy pretty much everything within the state of Ohio. A lot of guys around here only have 20 to 50 head. I know when a lot of those guys are calving and I’ll go buy them up before they take them to stockyards. I do a lot of business with United Producers too.”

Along with feeder cattle, NGLM markets cows. The feeder calves are kept at one location and the cows are housed at a separate farm.

“One of my biggest markets is mature cows — especially Angus-based cows. I buy the cows at herd dispersals or straight off the farm. Some families don’t want to fight the winter. In the fall I bought lots of bred cows and we have been palpating them, vaccinating them, worming them, and shipping them to a buyer to calve out,” Vollborn said. “One of my first deals in this business was buying 200 head of cow-calf pairs and had them here for 6 days. I like getting feeder cattle started and growing them, but I love buying cows. I try to make $50 or $75 a head. It is pretty slim margins a lot of times.”

“I buy cows that can be used for recip cows. The industry used to buy a lot of mediocre recip cows. But now, people want good cows they won’t have problems with that they can use again the next year. That is how I got started,” Vollborn said. “I try to buy them straight off the farm and when I get cattle in, I vaccinate them within 24 hours and have a vet palpate them and tell me their age. We’ll keep them for 45 days and make sure everything is solid then put them on Facebook and sell them. If they are not 100%, I wait until they are. As soon as you see problems you have to treat them. I have the vet sign off on the age of the cow and the stage she’s in. I sell them everywhere, but I have sent the most to South Dakota. Selling recip cows is a niche market. You can’t go off of market price, it is more about quality and how she’s bred.”

In total there are cattle at five locations, all rented.

“On all of my operations I keep a focus on the environment. We try to manage the ground the cattle are running on. We try to not tear it up,” he said. “In the wintertime we try to keep the cattle in closer to hard pads and in the spring we’ll turn them out on fresh grass.”

The business is based on quality cattle and consistent loads designed to meet specific needs, but it depends on relationships with buyers and sellers as well.

“When I started this, it was with a lot of people I have never met. But after I sell one load of cows and it is exactly what they wanted, they want more. It is totally about relationships. You have got to be able to trust people. Every deal is different. There is not one deal that has gone the same as another,” Vollborn said. “The key to selling to feedlots is selling them good cattle. They don’t want a sick load of cattle coming in. I will keep cattle until they are in good shape. Sick cattle are quarantined. We are always taking temps and monitoring. This is all based on traceability now. Everyone wants to know where their food comes from and you have to be able to prove it. Everything is documented. At any time we can go back and see what was done to her and where she came from. Our system is extremely detailed. You have to be like that to be in this business. We keep records on everything we do for 5 to 10 years.”

The cattle in Vollborn’s care are fed a grower’s pellet with dietary adjustments as needed, being overseen by Burkmann Feeds in Kentucky. They are fed hay baled on up to 200 acres of the farm and procured locally in the winter months and have pasture access as well.

Transporting the cattle that move through the business is a massive logistical effort.

“We have a very reliable group of 20 to 30 truckers we work with. There can’t be any stops. They have to make sure the trailers are clean,” he said. “We put a lot of pressure on those guys, but it is so crucial to have good truckers in this business. We have to count on these guys to get the animals there as safe and healthy as possible. We have to do things right. The faster you move cattle, the faster they get sick and go in the opposite direction than what you’re trying to achieve. It is all based on quality and health and not quantity. The animals have to be healthy or they’re not going work.”

In the last year, more than 2,000 cattle have moved through NGLM, which has created a solid base to build upon moving forward. The small business has one full- time and a couple of part time employees in addition to Vollborn.

“I’m my own boss. I love dealing with people and I talk on the phone all the time. Keeping costs as low as possible is a real challenge and sometimes you don’t feel like you’re moving forward, but I wouldn’t go back to the power plant for anything,” he said. “I don’t want to grow too fast, but my goal ultimately is to have a couple of different guys out looking at cattle and possibly expanding into something where we can cover a lot more ground across the United States. I have been around cattle all my life. That is where I got the passion for this business and decided that is where I want to be. I want to make this sustainable to where my kids can do this, if they decide that is what they want to, just like my dad did for me.”