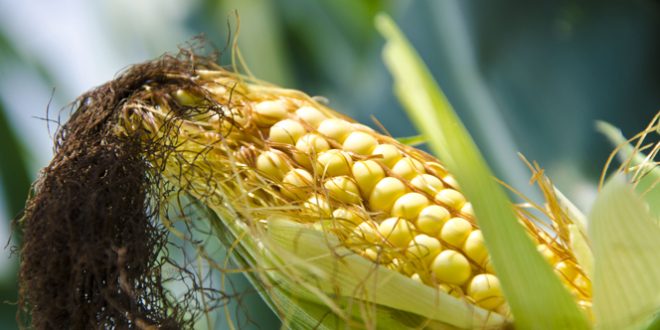 Nitrogen loss from synthetic fertilizer is a concern for many farmers as it is a loss in potential bushels, and also can be harmful to the environment.

“Research has found in some light soils, as much as 40% to 60% of synthetic nitrogen fertilizer can be lost due to volatilization into the air,” said Mark Reisinger, vice president of commercial operations with Pivot Bio.

The timing of nitrogen (N) application can also be an issue. Having the N available to the crop in a usable form, when the plant needs it can be hit or miss. Traditionally, synthetic N fertilizer is applied multiple times throughout the growing season to feed the soil, and meet a growing crop’s needs.

A microbe was found in Missouri, and new microbial product has been developed utilizing it to capture N from the air, and deliver it to a corn crop in a form that can be utilized.

“The focus at Pivot Bio is to develop microbes that have the ability to fix atmospheric N on corn roots to provide a sustainable supply of N during the peak growing season,” said Randy Minton, strategic accounts leader at Pivot Bio.

The latest product is Pivot Bio PROVEN, which consists of N producing microbes that are applied during planting, and can be used with standard in-furrow application equipment.

“The product is applied at .1 gallon per acre in-furrow at planting. The microbes attach to the pericarp of the corn seed, and then to the epidermis of the roots once the seed germinates,” Minton said. “The microbes and the roots form a mutually beneficial relationship in which the microbes feed on the exudate released by the roots, and then reproduce and colonize on the epidermis and in the rhizosphere. The exudate from the roots provides the microbes with the energy they need to fix N gas from the air, convert it to ammonia form of N, and feed it directly to the growing corn roots.”

These microbes reproduce and develop as the corn crop develops. They adhere to the corn roots as the roots grow. The ammonia N they give off goes directly to the roots of the crop. “As corn matures through the vegetative growth stages, the need for N increases. As corn develops to the V4 – V5 growth stage, an acre of corn needs approximately 1 pound of N per day. From V5 – tassel, the crop has the ability to take in and store 2.3 – 2.5 pounds of N per day. After tasseling, the crop requirement returns back to about 1 pound of N per acre per day. During this time, the microbes multiply and increase N production as well, with peak production occurring from V6 through tasseling which coincides with the crops greatest need for N. The life cycle of the microbe ends between R4 – R8,” said Reisinger. “These microbes are an environmentally friendly source of N for the crop because they are not washed away by weather events, and they do not volatilize into the air like synthetic N can. This helps to ensure a healthier plant throughout the growing season.”

“This product can be applied at extremely low rates, in-furrow, since it is a biological that will naturally multiply as the corn root grows,” said Adam Holm, Pivot Bio NLIGHTEN Leader. “Pivot Bio NLIGHTEN is an in-furrow delivery system developed specifically to uniformly apply the product at .5 gallons per acre. The product can also be applied through an existing in-furrow system when mixed with the starter fertilizer being utilized.”

The microbe used in Pivot Bio PROVEN is unique to corn, and does not have the same activity on other crops. Research is currently being conducted to find a similar microbe to be utilized in other grass crops that have a need for N throughout the season.

“Pivot Bio PROVEN has the ability to produce as much as 25 pounds of N per acre. This means farmers can now manage N in more environmentally sustainable ways,” Minton said.

As water quality issues are a growing concern, N and nitrates in the water are beginning to get more attention. Research has found that phosphorus can cause an increase in the size of a harmful algal bloom (HAB). N, on the other hand, impacts the level of toxicity of the HAB. Nitrogen is easily leached through the soil with rain water. Synthetic fertilizers containing N goes through a process of denitrification over time based on environmental conditions, and are lost to the environment.

“The goal of Pivot Bio is to allow farmers to manage their N fertilizer and actually reduce rates by using Pivot Bio PROVEN, while maintaining yields and protecting the environment,” Minton said.

By Doug Tenney, Leist Mercantile Grains the first half of May were all lower with …