Home / Crops / Overwintering of pathogens and insects: What do winter temperatures tell us about next season?

Overwintering of pathogens and insects: What do winter temperatures tell us about next season?

Over the years we have developed databases of winter temperatures followed by scouting to indicate starting pathogen populations for Ohio.

We have documented early infections and overwintering ability of the fungus, Cercospora sojina, that causes frogeye leaf spot. It appears that when there are less than 10 days during the months of December, January and February of less than 17 F, we have had reports of outbreaks of frogeye leaf spot. This occurred in fields where there was a high level of inoculum at the end of the season the same or similar moderately to highly susceptible cultivar was planted into the same field again which then initiated the epidemic that much sooner. Losses of greater than 35% in yield or very early fungicide applications were necessary.

Expecting continued warmer winter temperatures, for fields with a history of frogeye leaf spot, and no-till production systems, the first thing for farmers is to do now to mitigate losses in 2020.

Rotate fields with high levels of frogeye leaf spot into corn or another crop.
If it is still targeted for soybean, look at their soybean varieties frogeye leaf spot resistance scores. Your seed dealer will have more information. Plan now for what fields they will go into. Scout the susceptible cultivars much earlier than what we have called for in the past and monitor levels.

Another pathogen that may be more prevalent after a warm winter is Stewart’s bacterial wilt. This disease is transmitted to corn by corn flea beetle which survives in greater numbers in warm winters. This is a greater problem in popcorn and sweet corn as most field corn has high levels of resistance to the bacterium.

Most other field crop insect pests in Ohio are not highly influenced by winter conditions as they are well-adapted to withstand cold overwintering conditions. One exception is Mexican bean beetle, an occasional pest of soybean (especially in central Ohio). Warm winter conditions may cause higher populations of this insect the following field season. 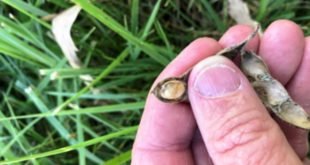 Why the ugly soybeans?

Scouting Fields for This Year and Beyond

Despite the rapid growth and ideal weather through a majority of the growing season, 2018 …