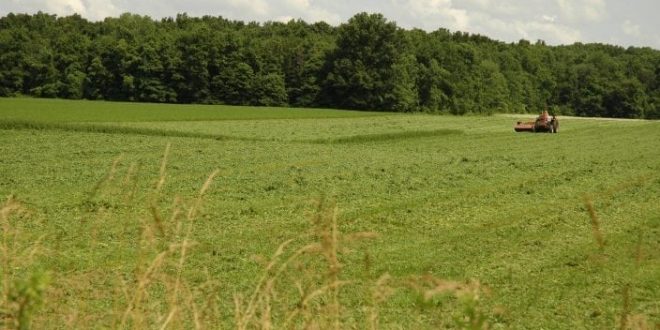 The year is still fairly new, and 2020 has brought with it some newly-introduced legislation in the Ohio General Assembly. That being said, in 2020 the General Assembly also continues to consider legislation first introduced in 2019. From tax exemptions to CAUV changes, to watershed programs and local referendums on wind turbines, here is some notable ag-related legislation making its way through the state house.

HB 400 was introduced after our last legislative update in November, so while it was first introduced in 2019, it still technically qualifies as “new” to us. Since its introduction, the bill has been discussed in two hearings in the House Ways & Means Committee. The bill would give owners and operators of gas stations a tax rebate of five cents per gallon for sales of ethanol. To apply, the fuel would have to be between 15% and 85% ethanol (E15). If passed, the tax credit would be available for four years. The bill is meant to encourage gas station owners in Ohio to sell E15, which is much more readily available in other states.

Introduced on January 29, 2020, HB 485 would make it easier for farmers to stay enrolled in the Current Agricultural Use Valuation (CAUV) program. CAUV allows agricultural land to be taxed at a much lower rate than other types of land. If HB 485 were to pass, instead of filling out and turning in a CAUV renewal application every year, owners of agricultural land would simply have to submit documentation on the annual gross income of the land to the county auditor each year.

Legislation from 2019 still being considered includes:

House Bill 24 “Revise Humane Society law”
In November, we reported that HB 24 passed the House unanimously and was subsequently referred to the Senate Committee on Agriculture & Natural Resources. Since that time, the committee has held two hearings on the bill. The hearings included testimony from the bill’s House sponsors, who touted how the bill would improve humane societies’ public accountability. The bill would revise procedures for humane society operations, require humane society agents to successfully complete training in order to serve, and would establish procedures for seizing and impounding animals. It would also remove humane societies’ current jurisdiction over child abuse cases and make agents subject to bribery laws. Importantly, HB 24 would allow law enforcement officers to seize and impound any animal the officer has probable cause to believe is the subject of an animal cruelty offense. Currently, the ability to seize and impound only applies to companion animals such as dogs and cats.

House Bill 109 “To authorize a property tax exemption for land used for commercial maple sap extraction”
HB 109 was first introduced in February of 2019, but has recently seen some action in the House Ways & Means Committee, where it was discussed in a hearing on January 28, 2020. The bill would give owners of “maple forest land” a property tax exemption if they: (1) Drill an average of 30 taps during the tax year into at least 15 maple trees per acre; (2) use sap in commercially sold maple products; and (3) manage the land under a plan that complies with the standards of reasonable care in the protection and maintenance of forest land. In addition, the land must be 10 contiguous acres. Maple forest land that does not meet that acreage threshold can still receive a tax exemption if the sap produces an average yearly gross income of $2,500 or more in the three preceding years, or if evidence shows that the gross income during the current tax year will be at least $2,500.

House Bill 160 “Revise alcoholic ice cream law”
Have you ever thought, “Gee, this ice cream is great, but what could make it even better?” Well this is the bill for you! At present, those wishing to sell ice cream containing alcohol in Ohio must obtain an A-5 liquor permit and can only sell the ice cream at the site of manufacture, and that site must be in an election precinct that allows for on- and off-premises consumption of alcohol. This bill would allow the ice cream maker to sell to consumers for off-premises enjoyment and to retailers who are authorized to sell alcohol. HB 160 passed the House last year and is currently in Agriculture & Natural Resources Committee in the Senate. Since our last legislative update, the committee has had three hearings on the bill. In the hearings, proponents testified in support of the bill, arguing that it would allow their businesses to grow and compete with out of state businesses. Senators asked questions about how the ice cream would be kept away from children, how the bill would help business, and about other states with similar laws.

Senate Bill 2 “Create watershed planning structure”
In 2019, SB 2 passed the Senate and moved on to the House Energy and Natural Resources Committee. If passed, this bill would do four main things. First, it would create the Statewide Watershed Planning and Management Program, which would be tasked with improving and protecting the watersheds in the state, and would be administered by the ODA director. Under this program, the director of ODA would have to categorize watersheds in Ohio and appoint watershed planning and management coordinators in each watershed region. The coordinators would work with soil and water conservation districts to identify water quality impairment, and to gather information on conservation practices. Second, the bill states the General Assembly’s intent to work with agricultural, conservation, and environmental organizations and universities to create a certification program for farmers, where the farmers would use practices meant to minimize negative water quality impacts. Third, SB 2 charges ODA, with help from the Lake Erie Commission and the Ohio Soil and Water Conservation Commission, to start a watershed pilot program that would help farmers, agricultural retailers, and soil and water conservation districts in reducing phosphorus. Finally, the bill would allow regional water and sewer districts to make loans and grants and to enter into cooperative agreements with any person or corporation, and would allow districts to offer discounted rentals or charges to people with low or moderate incomes, as well as to people who qualify for the homestead exemption.

Since SB 2 moved on to the lower chamber, the House Energy and Natural Resources Committee has held multiple hearings on the bill, and has consented to two amendments. The first amendment would keep information about individual nutrient management plans out of the public record. Similarly, the second amendment would keep information about farmers’ agricultural operations and conservation practices out of the public record.

Senate Bill 234 “Regards regulation of wind farms and wind turbine setbacks”
SB 234 was introduced on November 6, 2019. Since that time, the bill was assigned to the Senate Energy & Public Utilities Committee, and three hearings have been held. The bill would give voters in the unincorporated areas of townships the power to have a referendum vote on certificates or amendments to economically significant and large wind farms issued by the Ohio Power and Siting Board. The voters could approve or reject the certificate for a new wind farm or an amendment to an existing certificate by majority vote. The bill would also change how minimum setback distances for wind farms might be measured. The committee hearings have included testimony from numerous proponents of the bill.