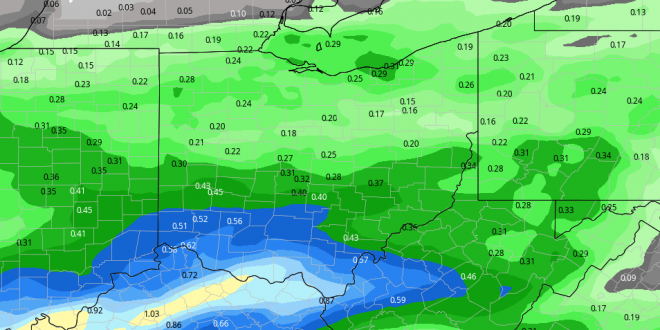 Dry the next 4 and a half days, and sunshine will be a dominant part of the forecast those days. The only differentiation each day will be air mass, as we have a colder surge coming today, being reinforced by some Canadian air tomorrow. We now look for tomorrow to be the coldest day, and we are less concerned about temps mirroring those of last week. While we will be chilly and below normal, it will not be “that cold”. Temps start to ease a bit Friday, and we actually end up with fairly pleasant or seasonal temps this weekend. Clouds will build Sunday, after we start with some morning sun. 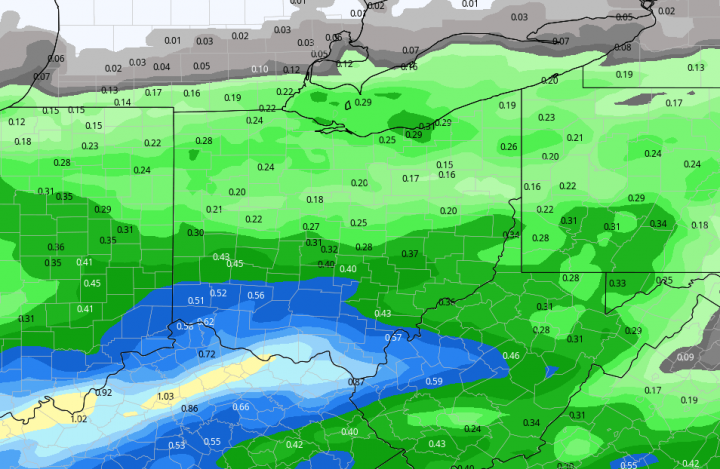 Our next system arrives late Sunday and continues through the overnight and into Monday early afternoon. While we are leaving the door open to both rain and snow, especially with the bulk of action coming overnight during what would normally be the colder part of any 24 hour period, we still think most of the action will stay liquid. Rain totals for Ohio will range from .15″-.68″ with coverage at 80% of the state. The map at right shows moisture potential for the Sunday night-Monday system.  Action winds down Monday afternoon and it would not be out of the realm of possibility  to see sunshine before sunset. We are dry with a mix of clouds and sun for Tuesday.

Another front comes in quickly at midweek. This one has potential for rain or snow. Liquid associated with this front will run from .25″-.75″ with 100% coverage. However, if that comes as mostly snow…it could be a problem, as that could add up to significant accumulation. For now, its two early to see one way or the other. Much colder air is coming behind the front…so we need to monitor. We should see coverage at 80% of the state again. Very cold behind the front for next Thursday and Friday.

The extended 11-16 day forecast window is drier. We stay cold Saturday the 29th through Monday the 2nd. After a slight moderating push around Tuesday the 3rd with partly sunny skies, we have a potential for snow Wednesday the 4th. Accumulations are possible. Then we finish the extended window with partly sunny skies for the 5th and 6th, but colder air holds over Ohio. 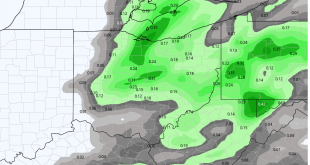 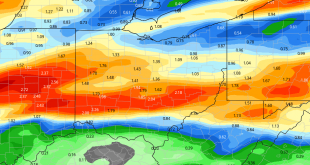 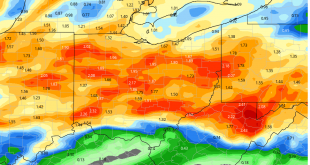 March 25, 2020 -- We are on track to see slightly better weather today. However, this will be somewhat short lived, as a strong frontal complex continues to plow towards us. This system will arrive overnight tomorrow night and then keep us wet through the weekend...