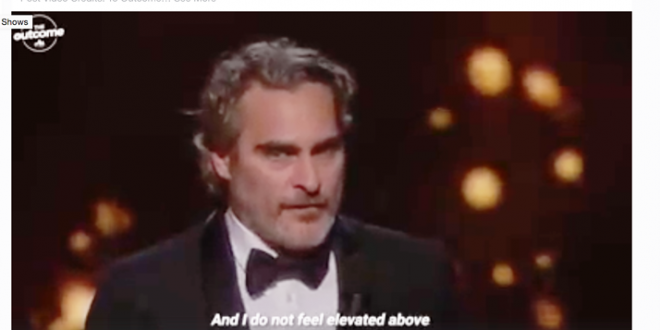 Recently, I coerced Paul into watching the Oscars. I love, absolutely love movies and watching the clips they show. To my dismay toward the end, the Joker climbed to the stage to accept his award and began to criticize agriculture. The joker continued and OMG! My thought was “this is not good”! Snuck a peek at my dairy farmer in the Lazyboy, he was in a trance. Rubbish! The war on agriculture seems to be thriving from politics to Hollywood. At some point you would think that people would remember the old saying “Don’t bite the hand that feeds you.”

When Hollywood depicts farming, often it is either romanticized or turned into a horror movie. Maybe what we need are some good feature films that depict an authentic agriculture message. Get some actors/actresses sharing genuine agriculture points. The award-winning speech can include a thanks to all the farmers who feed America. Here are a few of my favorite farm flicks.

Best cinematography goes to The Biggest Little Farm. A 2018 documentary, The Biggest Little Farm is one of the most beautiful films I have seen. The story is about filmmaker John Chester and his wife. They leave the city to create a 200-acre farm with the highest level of biodiversity. A positive for this film is that it does not depict the Garden of Eden. It exposes the real-life challenges and struggles along the 8-year journey of creating this farm. A big shortcoming (and I mean BIG) is that nowhere does it disclose the huge amounts of cash or investors it takes to create this gem. The movie is definitely worth a watch for the cinematography alone.

Best Farm Hullabaloo goes to Food Evolution. A 2016 documentary shows the GMO debate. There are multiple story lines telling the story of how GMOs are beneficial and how people make food choices. A fascinating insight on how emotion and irrational fears impact food choices — worth a watch.

Best Farm Diversity goes to Farmland. This 2014 documentary follows the journey of six farmers in diverse operations. It is an authentic message. The only con was the depiction of the woman organic farmer. I was disappointed that they depicted her so “earthy.” Most farmers I know clean up to go to market and have dinner, but this is a good watch.

Best Film goes to Field of Dreams. Our family loves baseball and this 1989 movie was just about perfect. There is a little bit of reality due to the financial issues on the farm and little bit of fantasy. I mean come on…I want famous baseball players to walk out of my fields, don’t you! It’s a great movie and if you get a chance be sure to stop at the real Field of Dreams.

Best Actress goes to Temple Grandin. This 2010 film is based on Temple’s real life growing up with Autism to finding her passion with cattle. This film’s authentic message definitely makes it a must see!

Best Children’s movie goes to Babe. It’s not super realistic but does show some realties from the farm. It’s just cute and entertaining. I can’t wait to watch it with my new grandson.

We can’t forget about the snacks and popcorn! Streaming, blue-ray and downloading movies have made home the preferable place to watch movies these days. Head to kitchen, create a healthy snack and sit down to enjoy a farm flick.

Popcorn is a great wholegrain snack choice. Try different toppings to mix it up a bit.

Preheat a large cast iron Dutch oven or pan on a stovetop over high heat. Add coconut oil, then popcorn. As soon as it begins to pop, cover and turn down to medium heat until sound of popping stops, about 3 to 4 minutes.

In a small bowl, toss together the popcorn kernels, oil, and 1/8 teaspoon of the salt. Transfer the mixture to a brown paper lunch bag and fold the bag over three or four times to close. Place the bag in the microwave on top of a plate and cook on high power until the kernels stop popping, about 2 minutes.

In a medium bowl, stir together the honey, peanut butter, and remaining 1/8 teaspoon salt. Add the popcorn, removing and discarding any un-popped kernels. Add the peanuts and stir until well combined. Place the bowl in the freezer for 5 minutes to help solidify the mixture.

Spray your hands with cooking spray. Using your hands, form 4 baseball-sized clusters out of the mixture. Squeeze each cluster firmly, holding for several seconds, so the cluster adheres into a ball. Spray your hands with cooking spray again if the mixture begins to stick to your hands. Place the balls on a plate and place in the refrigerator for 5 to 10 minutes to solidify further. Serve immediately or wrap in aluminum foil and store in the refrigerator for up to 4 hours. Serves 4 Serving size: 1 ball Per serving: Calories 180; Total Fat 8g; Protein 4g: Carb 25g; Fiber 2g.

Break graham crackers into 2 squares. Spread chocolate-hazelnut spread on one square. Top with the other half. Enjoy. Makes 4-100 calorie chocolate treats!

Lightly coat the inside of a 6-quart oval slow cooker with cooking spray.

Spread the mixture on a large sheet of foil to cool. Store, covered, at room temperature for up to 2 weeks or freeze for up to 3 months.

Tip: If using a sugar substitute, we recommend Splenda Brown Sugar Blend. Follow package directions to use product amount equivalent to 1 tablespoon brown sugar. Nutrition Per Serving with Substitute: same as below except 1 g total sugar.