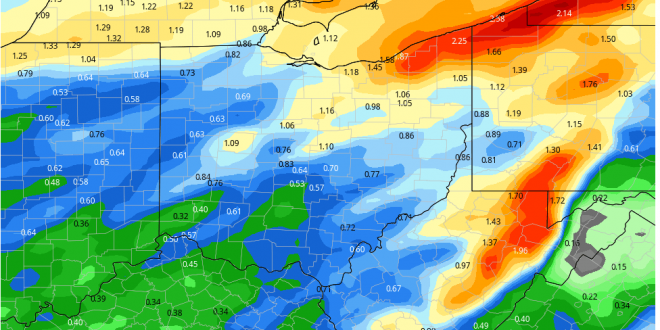 No new precipitation expected the rest of this week. While it remains chilly today, we do think temps are able to ease just a little bit later this week and should be significantly warmer for the finish of this weekend. With northwest flow over the next couple of days, we need to remain on the lookout for some lake effect snow and cloud cover in typical areas of the state (NE) but the rest of the state does not have to worry about anything like that. Today we are chilly and clouds may be a bit stronger then sun, especially in the north. But, the rest of the week shows at least a mix of sun and clouds and at best mostly sunny skies. Temps tomorrow and Thursday are not as cold, then we deal with slight temperature setback for Friday, before a significant warm up for the weekend. That warm up will come on south flow ahead of our next front.

That front arrives next Monday. Rain is expected along and ahead of the front, then on Tuesday as cold air races in, we expect snow to fall. The switch over happens overnight Monday night into early Tuesday morning. Snow accumulations are possible, but totals depend on timing, which can change dramatically over the next 6 days. Right now liquid equivalent precipitation totals for the entire event look to be in the .25″-1″ range, with rain Monday and Monday night, snow Tuesday. 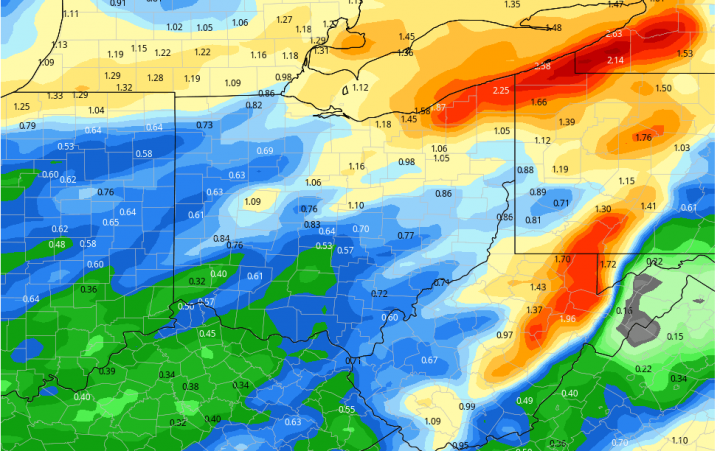 We turn chilly for Wednesday, but clouds give way to sun, and then moderate temps again on Thursday the 12th, with partly sunny skies to finish the 10 day forecast window. The map at right shows liquid equivalent precipitation totals for the 10 day period.

For the extended period, we have 2 chances for precipitation. The first chance arrives on Friday the 13th with increasing clouds and the chance for afternoon and evening rain or snow showers. Moisture totals are minor, with liquid equivalents of .3″ or less. Coverage will be at 60%. Then after colder air comes in for the weekend, we warm significantly again for Monday the 16th, and we have our second chance of rain for Tuesday the 17th. We can see totals up to .75″ but the moisture will be mostly focused on southern Ohio. We have coverage at 100% of the state from I-70 south, and only 10% of the state north of I-70 at this time. However, track of the low will determine just where the moisture eventually spreads, and there is plenty of time for that track to change…perhaps multiple times!

But this week at least is looking drier, and should allow for more field work, especially as time goes on. 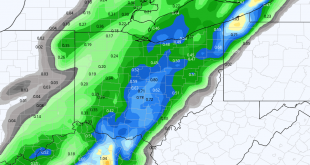 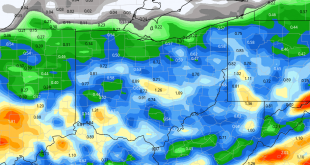 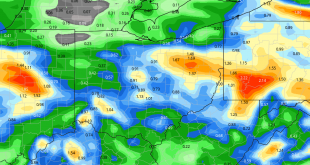