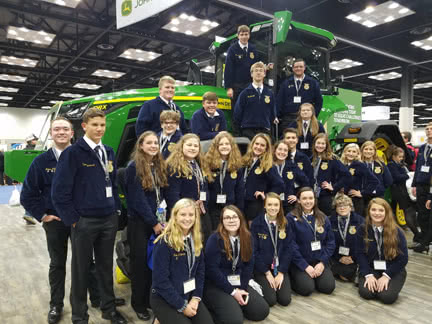 Members of our chapter enjoyed a very successful Circleville Pumpkin Show this year! For the first time ever our FFA chapter entered a pumpkin in the giant pumpkin weigh off. The pumpkin was grown   behind the school in a bed of compost close to our raised bed gardens. Several students took turns caring for the pumpkin but FFA President Laine Abbott was the one who had the honor of weighing in our entry in the contest. The pumpkin topped the scales at 178 lbs, which wasn’t close to the winning pumpkin’s 1,400 lb weight but was good enough for second place in the “Charlie Brown” pumpkin contest for first year growers under the age of 18! The Chapter received $150 from the Circleville Giant Pumpkin Growers Club for their efforts and members learned a lot about caring for specialty plants through the process. Members are already planning to grow a much bigger pumpkin next year!

Pumpkins weren’t the only entries made by members of the chapter. Students in the Food Science classes prepared canned pickles, grape jelly and grape juice along with salsa and pepper jelly to enter in the Canned Goods competition. They swept first place in each of the Junior divisions (pickles, jellies, fruits/vegetables) and also earned Best of Show honors with their dill pickles!  Members also entered the Junior Pumpkin Pie baking competition and took two of the top four spots. Junior member Hallee Scott won the Champion Junior Pie while sophomore Olivia Hettinger placed fourth. The Chapter’s Pumpkin mini pie entry also placed first.

Students in the Plant and Animal Science class entered produce from the chapter gardens and earned too many ribbons to mention!  They placed first with the following: Pimento peppers, mixed peppers, hot peppers and patio tomatoes. The members enjoyed caring for the garden plants and hope to raise more varieties of produce next year!

Additionally, the members constructed an FFA float to enter in the Thursday night parade. Everyone enjoyed being a part of this great agriculture tradition in our area!

Chickens and Canning for Charity Project is a Success!

On October 1st Mrs. Johnston’s agriculture classes participated in the second annual “canning for charity” day. In just seven class periods the students turned five half bushel boxes of grapes into 143 quarts of grape juice! The students used the kitchens in the former home economics classroom to conduct the project. All 143 quarts of juice will be donated to the Church Triumphant Food Pantry and the ZT Pioneer Pantry to provide wholesome drinks to hungry families.

Mrs. Johnston’s freshman Plant and Animal Science students also raised 39 broilers from chicks to market as part of the project. The students learned the basics of animal care and observed animal behavior and growth firsthand through the experience. The chickens raised by the classes outperformed the average growth measurements (feed to gain ratio, days to market, market weight) and dressed out to an average of 5.3 lbs each. The chickens will be distributed at the Church Triumphant Pantry’s Christmas Food Bank day.

Our FFA Chapter traveled with members from the Adena FFA for our annual trip to the National FFA Convention in Indianapolis, Indiana. The trip began on Wednesday, October 30th with a tour of Beck’s Hybrids in Atlanta, Indiana. Members learned how new varieties of corn and soybeans are developed and tested for quality at Beck’s before being marketed to farmers across the country. Next on the agenda was a one hour horseback tour of Fort Harrison State Park. Members learned forest ecology while hearing how the park was created from a former Army camp in the early 1990’s. After riding horses the members got to watch horses perform during the Cinch World’s Toughest Rodeo. On the second day everyone donned their official dress for the opening session, career show and National Chapter award session. Zane Trace was recognized on stage for being named a Three-Star Chapter for the 6th year in a row. Three-star is the highest level that a chapter can receive based on their program of activities conducted throughout the year. Thursday evening members enjoyed a hibachi dinner and learned a new sport—rock climbing! On Friday members toured Brandywine Creek Farm  and visited the FFA Career Show where over 600 agriculture businesses and over 100 colleges set up displays for members and advisors to gain more information about their career and course offerings.  On Friday night Zane Trace FFA member Olivia Pflaumer (ZT Class of 2017) was recognized on stage as one of four students chosen as finalists in the American Star in Agriscience Competition. While Olivia did not win the award, she did receive $2,000 for being named a finalist, which is an extremely rare honor for an FFA member to achieve! Our members felt that they increased their awareness of agriculture issues and improved their leadership and responsibility as a result of the trip. We would like to thank the Zane Trace Board of Education for approving our trip and the Zane Trace High School Staff for supporting us in attending the National FFA Convention! We hope to have more members on stage next year!

The Zane Trace FFA Food Science and Technology Team placed first in the District 7 CDE held at Zane Trace on Wednesday, November 13th. Junior Taylor Brown earned top individual honors out of 99 competitors in the event! Members were tested on their knowledge of food safety & sanitation practices, food processing equipment use and their ability to identify differences in food samples and aromas. A total of 12 members participated in the event. The top four ZT placers were Taylor Brown, Brenden Naumovski, Laine Abbott and Macy Long. These four members will now compete at the Ohio State University on Saturday December 7th in the Ohio FFA State Food Science CDE!

Students from the Agriculture Business class have taken on the role of stocking the ZT Pioneer Pantry for the 2019-2020 school year. Members have put their business skills to work by tracking which items are most popular among visitors to the pantry and by rotating stock to keep items fresh for patrons. They have also partnered with Zane Trace Elementary to provide toiletry bags for students who need them every other Tuesday. The class has even more projects in store for this year so stay tuned to what comes next!

Thank you for your support of our chapter!

We are proud to represent Zane Trace in all that we do!