Home / Weather / Ohio Ag Weather and Forecast November 21, 2019
November 21, 2019 -- Showers move into the state today, but likely don't fully get going until midday and this afternoon. The moisture still looks pretty light, a few hundredths to .25" with coverage at 90%.

Showers move into the state today, but likely don’t fully get going until midday and this afternoon. The moisture still looks pretty light, a few hundredths to .25″ with coverage at 90%. Showers continue off and on tomorrow over the farthest third of the state, but totals still are in that few hundredths to .25″. The rest of the state will see clouds and “hopefully” some sun…but with the colder air pushing in, that signals that sun will be more difficult to come by. Another wave of moisture comes Saturday, bringing .2″-.7″ to 80% of Ohio. But, we can see some snow in there too, particularly in central and northern Ohio, with some accumulation. The totals come down to temps, and we will take another look at that (Saturday temp profile) tomorrow.

Dry for Sunday as we try to turn out partly sunny. Then a mix of clouds and sun on Monday. Clouds start to increase on Tuesday.

Our next organized system develops Tuesday night and lasts through Wednesday. This will bring liquid equivalent of .25″-.9″ over 90% of the state and there will be some snow in there too. In fact, there is potential for 1-4″ of snow from I-70 north overnight Tuesday night and early Wednesday…but an official snow forecast  for that period is still several days out. 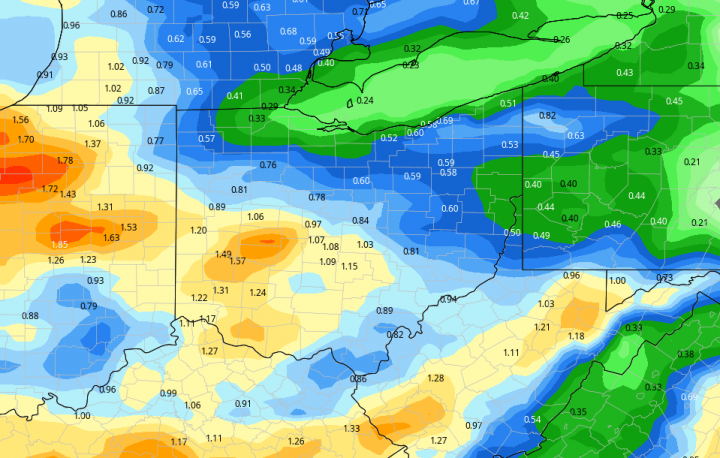 Dry for Thanksgiving. Then overnight thanksgiving night clouds are back, and we cant rule out scattered to isolated rain showers into Black Friday morning. A better organized system shows up at the end of the 10 day window on Saturday the 30th with rain and snow potential, and liquid equivalent totals of a few hundredths to half an inch (as of right now). The map at right shows liquid equivalent precipitation totals through next Saturday.

The extended period is looking colder, in fact, from the 2nd through the 6th, we can see temps over Ohio rival last weeks arctic blast.

Quarantine Chronicles brings us Kolt, Matt, and Dusty hosting today and talking about the Soybean …