It may be an especially challenging year for corn stalk quality in Ohio. Stress conditions increase the potential for stalk rot that often leads to stalk lodging.

Corn stalk rot, and consequently, lodging, are the results of several different but interrelated factors. The actual disease, stalk rot, is caused by one or more of several fungi capable of colonizing and disintegrating of the inner tissues of the stalk. The most common members of the stalk rot complex are Gibberella zeae, Colletotrichum graminicola, Stenocarpella maydis and members of the genus Fusarium.

The extent to which these fungi infect and cause stalk rot depends on the health of the plant. In general, severely stressed plants are more greatly affected by stalk rot than stress-free plants.

The stalk rot fungi typically survive in corn residue on the soil surface and invade the base of the corn stalk either directly or through wounds made by corn borers, hail, or mechanical injury. Occasionally, fungal invasion occurs at nodes above ground or behind the leaf sheath. The plant tissue is usually resistant to fungal colonization up to silking, after which the fungus spreads from the roots to the stalks. When diseased stalks are split, the pith is usually discolored and shows signs of disintegration. As the pith disintegrates, it separates from the rind and the stalk becomes a hollow tube-like structure. Destruction of the internal stalk tissue by fungi predisposes the plant to lodging.

The presence of stalk rots in corn may not always result in stalk lodging, especially if the affected crop is harvested promptly. It is not uncommon to walk corn fields where nearly every plant is upright yet nearly every plant is also showing stalk rot symptoms! Many hybrids have excellent rind strength, which contributes to plant standability even when the internal plant tissue has rotted or started to rot. However, strong rinds will not prevent lodging if harvest is delayed and the crop is subjected to weathering, e.g. strong winds and heavy rains.

Nothing can be done about stalk rots at this stage; however, growers can minimize yield and quality losses associated with lodging by harvesting fields with stalk rot problems as early as possible. Scout fields early for visual symptoms of stalk rot and use the “squeeze test” to assess the potential for lodging. Since stalk rots affect stalk integrity, one or more of the inner nodes can easily be compressed when the stalk is squeezed between the thumb and the forefinger. The “push” test is another way to predict lodging. Push the stalks at the ear level, 6 to 8 inches from the vertical. If the stalk breaks between the ear and the lowest node, stalk rot is usually present. To minimize stalk rot damage, harvest promptly after physiological maturity. Harvest delays will increase the risk of stalk lodging and grain yield losses and slowdown the harvest operation. Since the level of stalk rot varies from field to field and hybrids vary in their stalk strength and susceptibility to stalk rot, each field should be scouted separately.

Some of the same stress conditions promoting stalk rots may also be affecting the integrity of corn ear shanks. Corn ears usually remain erect on plants prior to physiological maturity (black layer). Ear “drooping” occurs when shanks have collapsed or crimped. In such ears, the milkline is still evident. This year drooping ears are evident in many fields, which have experienced late season drought stress. According to Dr. Bob Nielsen at Purdue University, this crimping of the shank suggests a loss of turgidity in the ear shank due to stress, possibly combined with some cannibalization of the ear shank similar to what occurs when the carbohydrates of the main stalk are cannibalized in response to severe stress (https://extension.entm.purdue.edu/newsletters/pestandcrop/article/do-you…). If droopy ears have not yet reached physiological maturity, collapsed ear shanks may cause kernels to black layer prematurely, which reduces grain yield. 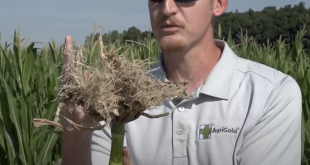