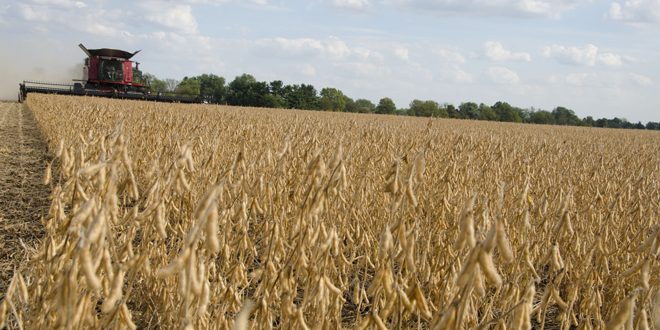 Corn and soybean harvest has been in full swing since early October. Yields continue to be extremely varied across the state. Both corn and soybeans have been pleasantly surprising with moisture levels as mid-October saw many soybeans running 9% to 11% moisture. Corn moisture quickly moved below 18% for many producers. Others could not believe their eyes when corn moistures dipped below 15%. Winter wheat acres were quickly planted as they followed soybean harvest in rapid fashion. The first frost of the season for many areas of Ohio took place the morning of October 13. It brought an abrupt halt to the growing season for late-planted corn and soybeans as well as double-crop soybeans.

The U.S./China trade talks continue, seemingly similar to soap operas, which are years in the running. I am quickly reminded of words from last late spring when some analysts announced, “A trade war can easily last far longer anyone could ever expect.” This current trade war between China and the U.S. has been playing non-stop since May 2018 when tariffs against each other first began. The Oct. 11 trade announcement was the result of 13 sessions of trade negotiations between the U.S. and China since 2018.

The grain markets were most surprised with this announcement as it appeared to come from nowhere. Corn closed up 17.5 cents, erasing the 14-cent decline just one day earlier with the negative WASDE report when yields were increased along with ending stocks being lowered but not as much as some had expected. Wheat that day closed up 15 cents while soybeans were up 12.5 cents. Weeks earlier President Trump announced the Oct. 1 tariffs planned by the U.S. toward China would be delayed till Oct. 15.

While euphoric outcries were lifted up by producers across Ohio and the Midwest, it bears bringing reality to what has been announced. The Oct. 11 announcement was a verbal agreement between President Trump and China’s Vice Premier. It is not, in its current fashion, a trade treaty. The Oct. 11 announcement became known as a Phase 1 trade deal. Some anticipate it would take 4 to 6 weeks to complete the details. Still sketchy points include which commodities, how many dollars, and the time frame. President Trump and President Xi could potentially sign an agreement next month in Chile. China wants December’s planned U.S. tariffs to be pulled off the table and not take place, prior to agreeing to further details for grains and their dollar amount. It appears China could easily be willing to just wait for the 2020 Presidential election to take place before truly negotiating for a long-term trade deal for China and the U.S.

The first winter blizzard hit the Upper Plains the second weekend of October. Snowfall amounts varied across North Dakota. North Dakota snow accumulations before Oct. 15 may have been a surprise to many across the Midwest. However, to those in North Dakota early October snow comes as no surprise. While it does not happen every year, it is an event which can happen at any moment during October. Corn and soybean production lost to the snow continues to be a huge unknown. Early projections suggested up to 150 million bushels of corn was lost. In addition, up to 50 million bushels of soybeans may not be harvested. Adding to the frustration for many across the Midwest is the realization that maturity continues to be behind normal.

As fall harvest was progressing into mid-October, soybean basis was getting wider in numerous locations across Ohio. Meanwhile, corn basis in many Ohio locations continues to be strong with plus numbers above the December CBOT for fall delivery. In addition, corn basis in other Midwest states has often been better than historical levels. Corn finds price support as it appears producers are putting plenty of corn into on-farm storage.