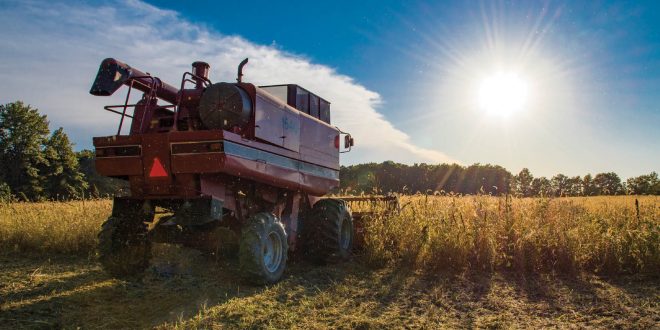 Weather has been wild card for farmers

Unfortunately, few of these things happened this past spring and summer. Farmers were ready to plant, but the weather didn’t cooperate. They would be ready to get out in the field and go to work. But then another rain would come along and they would be delayed another week or more, depending on the amount of rain — and some dropped a lot of water.

Several farmers and some agriculture industry people say this has been the worst planting season they can remember…just too much rain at the wrong time.

Not only were crops such as corn and soybeans affected, but very little first-cutting hay was made at the right time. Most of it was late and too mature when the weather did finally cooperate. Most first-cutting hay that was harvested was of poor quality.

It was interesting that as we moved into the growing season, the corn and beans that got planted made exceptional growth. The problem is they are about a month late.

Now farmers are hoping for a later than normal frost to allow late-planted crops to mature.

Early to mid-October is the normal time when frost is expected in this area. This year, farmers would like that to be about late October and even into November — and that may be too much to expect.

Considerable corn may be harvested wet and will have to be dried, either in bins at home or local elevators such as Centerra Cooperative or Colebrook Elevator. Drying can be expensive and lowers the net price farmers will get. Just what will farmers get for their corn and soybeans this fall? That depends a lot on what final harvest across the country turns out to be. If fewer bushels are available to come to market, prices can be better. At this point, no one seems sure just what the situation is.

USDA projected earlier that crops would be near normal and prices would not be much better than last year. Several other sources disagree with that projection and believe the harvested acres will be down enough to affect prices.

They point to the flooding conditions in the Midwest that didn’t allow crops to be planted. Locally, our weather also affected many fields. Western and northwestern Ohio suffered from too much rain even more that local areas.

Exports have been important to prices in the past. China and other Asian countries had been major buyers of our crops. At this point, exports to those countries, especially China, are down sharply. This impacts local prices.

Offsetting those declines is Mexico. It has been increasing the amounts of both corn and soybeans it is buying of U.S. crops.

Exporters are looking at other markets such as Japan and the European Union to increase their buying.

So there are a lot of unknowns out there that could impact local prices for corn and soybeans this fall. Across the country, farmers need some breaks in better weather and prices.

Submitted by John Parker, who is retired from The Ohio State University and writes for Farm Bureau.

OFBF Mission: Working together for Ohio farmers to advance agriculture and strengthen our communities.