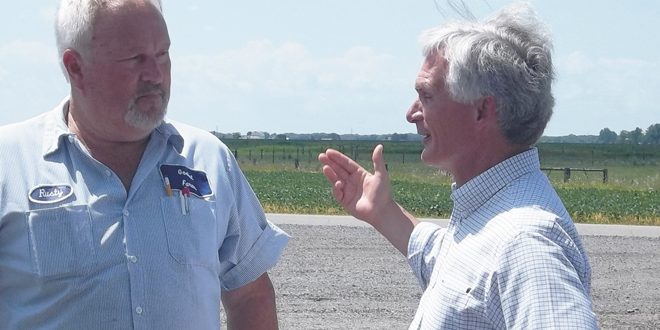 The extensive prevented planting acres in Ohio and limited yield potential for many acres of late-planted crops have generated plenty of discussion about the impact to farmers, agribusiness, and rural communities.

United States Congressman Bob Latta represents the largest farm-income producing district in Ohio and recently participated in a listening session with farmers and agribusiness people in Williams County to learn about the details of the situation.

“Everyone in the chain is going to be impacted, such as the folks that sell the seed, fertilizer, herbicide, equipment parts. There is a whole line of people besides the farmers who will feel the impact,” Latta said. “It is really important that I hear from the farmers. This thing hasn’t really hit hard yet. I think people are going to start to feel it in about two more months. The farmers see it right now.

“I can’t tell you how many calls I have had with the undersecretary of agriculture to explain what’s happening here and keeping him updated, making sure his department was aware of just how bad it really is here in Northwest Ohio. When Williams and Fulton counties were not included on the initial list (of the disaster declaration), we were on the phone immediately, and fortunately we got these two counties declared.”

The listening session with Congressman Latta was held on the farm of Rusty Goebel, a soybean grower from Williams County and member of the Ohio Soybean Council.

“The things I worry about in our area are businesses, churches, the trickle-down effect,” Goebel said. “We got it set up for [Congressman Latta] to come to our farm shop and just listen to the farmers.”

Goebel is also worried about the mental health of the area farmers and agribusiness people.

“There are a lot of crops that are not going to yield what we typically get, and most of us are not used to not doing anything during harvest. I think the pressure is going to get to some guys — and not just the farmers, but the agribusiness people, and bankers,” Goebel said. “This is going to take two or three years to get worked out. We won’t have as much income, so we will not buy as much, and that hurts everyone.”

Instead of awkwardly dancing around the subject of increasing financial and emotional stress in their rural community, Gobel and his wife, Susan, decided to tackle it head on at the meeting. While the initial purpose of the meeting was for those in agriculture to share their business concerns with Congressman Bob Latta, the forum also provided a great audience to share information about mental health concerns. To help address these concerns, two counselors from the Maumee Valley Guidance Center and Four County Suicide Prevention Coalition were in attendance to share tips on what to look for, and how to help those in need.

Karen VonDeylen, a counselor from a farm family, said being observant and telling someone that you have noticed a change in their behavior actually says “you care” to that other person.

“Often times it is a more effective way to open the conversation, rather than just asking someone how they are doing,” VonDeylen said. “Many times, people struggling with mental health will withdraw from regular activities. If they don’t go to morning coffee or Sunday brunch like they typically do, that may be a sign. Changes in sleep habits, for example, sleeping more or less than usual, even changes in appetite can be an indicator. Often these changes are in combination with each other.”

The U.S. Department of Health and Human Services published a list of 12 warning signs to be on the lookout for. They include: 1) Eating or sleeping too much or too little. 2) Pulling away from people and things. 3) Having low or no energy. 4) Feeling numb or like nothing matters. 5) Having unexplained aches and pains. 6) Feeling helpless or hopeless. 7) Smoking, drinking, or using drugs more than you should. 8) Feeling unusually confused or forgetful, on edge, angry or upset, or worried and scared. 9) Fighting with family and friends. 10) Unable to get rid of troubling thoughts and memories. 11) Thinking of hurting or killing yourself or someone else. 12) Unable to perform daily tasks like taking care of family or getting to work. A national lifeline has been set-up to help people deal with these issues. It is free, confidential and always available. Anyone can call 1-800-273 TALK (8255). The line is staffed 24 hours a day, seven days a week.

The Ohio State University’s College of Food Agriculture and Environmental Sciences has also put together a website with resources for farmers addressing the 2019 agricultural challenges. Visit https://u.osu.edu/2019farmassistance/home/ and follow the links for the specific area of interest.