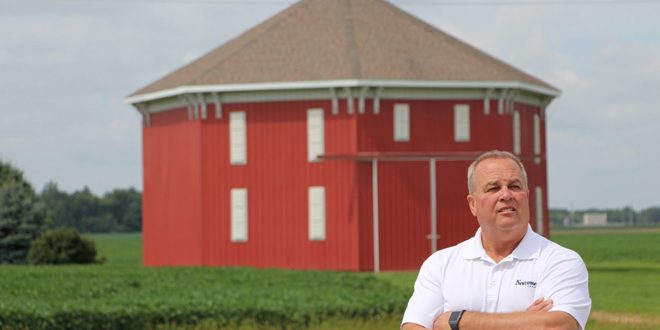 Glen Newcomer has faced a challenging 2019 on his Williams County farm.

The challenges of the incredibly difficult planting season for northwest Ohio are spilling over into the harvest season.

With over 80% of his 2019 corn and soybean crops not getting planted, Glen Newcomer, an Ohio Soybean Association member from Williams County, said weed control and planting cover crops has become the next big issue in 2019.

“We sprayed all our acres early in the season to prevent them from going to seed, and to keep out any noxious weeds,” Newcomer said.

All their fields were sprayed, and they were able to go back and follow-up with tillage on several of them.

“We stopped planting soybeans on June 30. After that date, we knew the odds were not in our favor for getting a crop to maturity,” Newcomer said.

Once planting had ended, the next step was to develop a plan for how the remainder of the acres would be handled in preparation for the 2020 crop year.

“Our plan was to either plant cover crops, or till the fields and prepare them as a stale seedbed for next spring. Our goal is to not perform any tillage next spring,” Newcomer said.

They still hope to plant wheat this fall in the fields that they want to tile next year. Newcomer had planned to plant about a quarter of the acres that did not get planted this spring to an oat cover crop, however August and early September were wet and did not offer the opportunity to get cover crops established.

“I have a semi load of oats that was supposed to be in the ground by now, and we haven’t even touched it,” Newcomer said. “I have never seen a year like this one, and never seen it this widespread. Most of the corn in the area was planted in June. I would guess 40% to 50% of it will be challenged to reach black-layer. For the soybeans, the challenges are even higher, and that crop is just as vulnerable. In my opinion, if we have a frost before October 15, over half the crops that did get planted in the area will not make it to maturity. Everything is just so late.”

For those looking to still establish cover crops this fall, time is of the essence according to Jim Hoorman, Soil Health Specialist with the USDA Natural Resources Conservation Service.

“We are passed the point of planting summer annuals such as sorghum sudangrass and pearl millet,” Hoorman said. “Depending on where you are farming in Ohio, your options are narrowing. In northern Ohio we have until the first week of October, and in the southern part of the state, we probably have until the third week of October depending on the weather. There is still time to establish brassicas such as radish, kale, rape, and grazing turnips. These will all need continued sunlight and rain to get going. The kale and rape will overwinter, but the radish and turnips will winterkill. As far as grasses, we can still plant oats and cereal rye. The oats will winter kill, but the cereal rye will survive all winter. Looking at legumes, we are too late for cowpeas. There is still time for crimson clover and true winter peas.”

When planting legumes for cover crops, especially later into the fall, farmers need to remember to use inoculants.