Last week was the single best week for fieldwork of the 2019 growing season, according to Cheryl Turner, State Statistician, USDA NASS, Ohio Field Office. There were 4.5 days suitable for fieldwork for the week ending June 30. The week was the warmest week in the 2019 growing season and most areas saw their first 90 plus degree day this year. Farmers pushed themselves and their equipment hard to try and make up for time lost to an otherwise 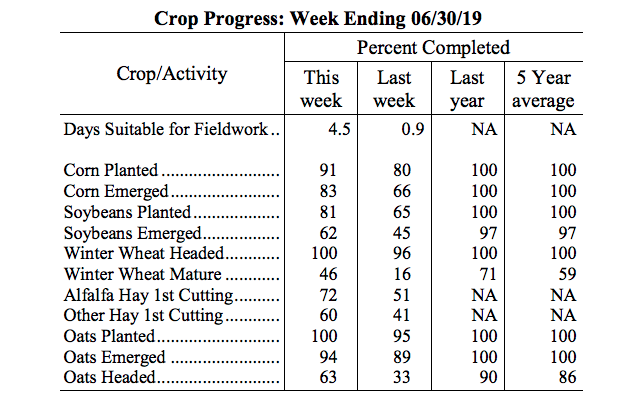 cold and very wet planting season. Through the whirlwind of activity, farmers were able to make progress on cutting an overly ripe first cutting of hay, plant soybeans at a fast pace, spray for weeds, and apply much needed fertilizer. Wheat harvest began in earnest for some growers in southern Ohio, while growers in northern Ohio readied themselves for the impending harvest. Wheat condition going into harvest was much worse than last year. Growers dealt with poor stands and downed-out spots. Corn planted last week was noted to be for silage and some farmers had abandoned hope for getting all of their corn for grain planted. Some earlier planted soybeans that were flooded out got replanted.