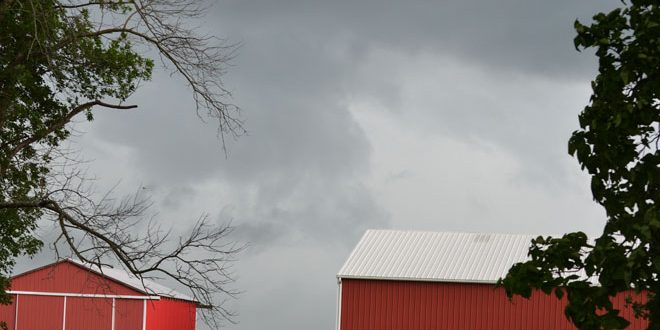 Ohio’s record rainfall leaving some farmers on the sidelines

During the wettest yearlong period in Ohio since 1895, the state is lagging the furthest behind in planting corn and soybeans compared to all states that plant the crops, according to experts from The Ohio State University and federal reports.

From June 1, 2018, to May 31, 2019, average rainfall across Ohio totaled 52 inches, which is about 10 inches above the mean for that period in the last decade, said Aaron Wilson, climate specialist for Ohio State’s College of Food, Agricultural, and Environmental Sciences (CFAES).

As a result, only 50% of Ohio’s corn crop and 32% of its soybean crop was planted by June 9, a report from the U.S. Department of Agriculture shows. By now, Ohio typically is 96% done with planting corn and 89% done with soybeans.

A brief slowdown in rainfall during the week of June 3 sent more Ohio corn and soybean growers out into their fields to plant, but that likely will prove to be only a temporary reprieve. The next two weeks are expected to bring above-average rainfall in the state, with the heaviest amounts in southern Ohio, Wilson said.

“We’re going to return to a more saturated pattern,” he said.

The growers who have been able to plant a corn or soybean crop likely will have to contend with other challenges that come with a lot of rainfall: more weeds, pests, and diseases.

Farmers who planted wheat and forages, such as alfalfa, have noted poorer conditions of these crops also due to the weather, he said.

“No one is really escaping challenges this year,” Wilson said.

For those planting corn in June, yield losses are likely—even if the grower has switched to a shorter-season variety, said Peter Thomison, a corn field specialist with CFAES. The losses hinge on growing conditions after planting, but they could be more than 50% for some farmers, he said.

The bulk of Ohio’s corn and soybean acres are typically planted by May 25 each year, with corn being finished earlier in the month.

For growers planting soybeans, there’s still time, but some loss in yields should be expected, said Laura Lindsey, a soybean specialist with CFAES.

Soybeans planted in late June produced yields that were 20% to 40% lower than soybeans planted by mid-May, Lindsey said, referring to data from research plots. Yield loss from delayed planting depends a lot on growing conditions the remainder of the year, Lindsey said.