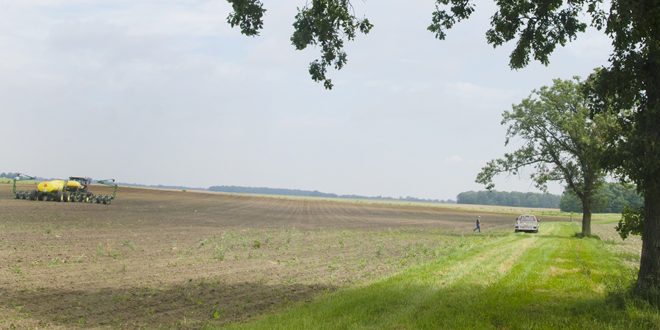 “Houston we have a problem here.” This is the original transmission from Apollo 13 on their mission to the moon in 1970. The quote was later shortened when the movie was released in 1995.

The quote is highlighted today concerning U.S. corn planted acres for 2019. Since early May, numerous weekly crop progress reports indicated corn planting progress severely behind normal. Last night’s report had the U.S. corn planting progress at 83%, which is a record low for this date. Earlier in March, USDA estimated the U.S. would plant 92.8 million corn acres for 2019. Simple math indicates 15.8 million corn acres are not yet planted. The eastern Corn Belt of Illinois, Indiana, Ohio, and Michigan still has 7.46 million acres of corn yet to be planted. The harsh reality is, it won’t all get planted. Northwest and western Ohio have been hit hard with the rains of May and June. There are areas where nothing is planted. Fall delivery corn basis levels have improved in Ohio 7 to 20 cents in the past three weeks.

Following the report corn was up 9 cents, soybeans up 3 cents, and wheat up 8 cents. Just before the report release corn and soybeans were down six cents while wheat was down two cents.

For weeks there has been continual discussion of corn acres which would not be planted, or “prevented planted” acres. At Mid-May this number had been estimated to reach 4 million to 6 million acres. It has only risen higher in the weeks that followed. Producers can receive a prevented planting payment with their crop insurance. For simplicity sake, it is a discussion between producer and their crop insurance agent as producers evaluate their own farming operation. Each operation is unique and “doing what your neighbor does” is not good advice.

Producers have seen quite a roller coaster ride in the grain markets this past month. On May 10, the USDA Supply and Demand Report provided negative numbers. Since mid-May, when December 2019 CBOT corn fell to $3.64 and rallied to $4.54 on May 29. Since then, December corn fell to $4.25 as weather conditions permitted planting progress to finally taking place. Earlier today, December CBOT corn was trading at $4.28, down six cents. This decline results from the good and excellent totals from last night of 59%, higher than expected. In that same time frame, November soybeans fell to $8.16 mid-May and rallied to $9.12. This morning November soybeans were $8.78, down eight cents.

The rally this past month was all weather or supply driven due to wet planting conditions with slow corn and soybean planting progress. Supply driven rallies are often extremely volatile with wide daily trading ranges, ending much sooner than expected. With this type of rally, the term “Short crop, long tail,” was born. The short crop results in a price spike which is often followed by months of price declines or the “tail.”

Many have expected USDA to reduce demand for the 2019 corn, soybeans, and wheat tables. The huge unknowns are corn acres and corn yield. Some have suggested we will not see corn acres reduced drastically with this report in spite of the growing corn prevented planting acres. Others have indicated we won’t get an accurate picture until the August 12 USDA monthly report.

Closely watch how much of a decline is shown for U.S. corn acres with this report.

Today’s advice: Don’t forget to tighten your seat belt a few more notches for the ride the next two months in the markets. Huge price volatility will be seen.