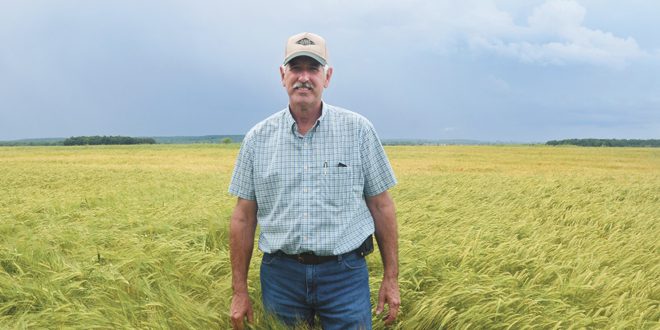 Tom Ramsey with Hiser Seeds in Ross County is one of seven growers in Ohio providing malting barley seed through the Malting Seed Producers specifically for use by Origin Malt.

With Ohio’s craft brewery boom in recent years, some of the amber waves of grain seen in fields this month in Ohio are barley planted to meet the exploding demand for locally grown malt.

“Barley is really interesting. The biggest take-home message with barley is that barley is not wheat. There are many similarities, but it is a different crop. Farmers don’t just get paid on yield. They get paid on quality too. You have to be very conscious of the quality,” said Laura Lindsey, with Ohio State University Extension. “Farmers are really excited to diversify and there is a lot of interest. Barley is harvested about 10 days earlier than winter wheat and that opens up a huge window for double-crop soybeans. It can be very profitable with those two crops coupled together.”

With one year of trial data, Lindsey was impressed with the barley yields in Ohio so far.

“Our barley yields were extremely high in 2018. Last year in Wood County, with no nitrogen, our barley yielded 80 bushels, which is phenomenal. With 80 pounds of N we were close to 100 bushels per acre in Wood County, which was our highest yielding site,” she said. “The other two locations were a little lower yielding, but still around the 80-bushel mark.”

Along with barley yields, Ohio State University Extension is also taking a look at nitrogen rates, which can be a tricky balancing act between yield and quality.

“In terms of N management, there are some differences between barley and wheat. For barley you want low protein and if you apply too much N, the protein will go higher than what you want. Dialing back on the N application is really important. You want 9.5% to 12.5% protein on a dry weight basis for barley,” Lindsey said. “There might be some contracts out there where they want higher protein, but that is the standard range. The best N rate is very location and environment specific. We have one year of data, but the ballpark looks like it is between 60 and 80 pounds of N per acre will ensure a good yield and the right protein.”

Four spring N application rates were examined in 2018: 0, 40, 80, and 120 pounds of N per acre applied at Feekes 5 growth stage. Each field received approximately 20 pounds of N per acre in the fall and the cultivar “Puffin” was planted. The highest yields were achieved with N rates ranging from 100 to 119 pounds of N per acre depending on the location. In Wood County the barley was in the proper protein range regardless of N rate, but in Clark County, protein levels exceeded 12.5% at 80 pounds of N.

Tom Ramsey with Hiser Seeds in Ross County has been tweaking the agronomics and ramping up acreage of malting barley. Ramsey is one of seven growers in Ohio providing malting barley seed through the Malting Seed Producers specifically for use by Origin Malt, a startup company that is nearing construction on a Marysville malting facility.

“It has been 6 or 7 years ago I met with the Ohio Seed Improvement Association about growing barley. We now have our fourth year in the field,” Ramsey said. “We’ve gotten good yields and we like to sneak in and plant double-crop beans. It comes off about 10 days earlier than wheat. Barley is also supposed to be a very good scavenger of phosphorus, which is one of the things we are fighting the hardest with water quality. But in terms of management, you definitely want to take what you are doing with

wheat and increase it quite a bit.”

“Field selection is a really critical issue,” Ramsey said. “You have to have a field that is really well-drained — yields seem to be much higher in those well-drained situations.”

Ramsey suggests starting with a seeding rate from 1.2 million to 1.6 million seeds per acre.

“Use a good starter fertilizer with 10 to 20 units of N in the fall. In the spring, though, when we apply N we have to be careful not to apply too much or to get too late with the application. You have to start with some N in the fall, then limit the N in the spring with early timing. Split spring applications don’t work in barley,” Ramsey said. “We like to be within 10 days of the fly free date for planting if possible and that could be a challenge in some years and places like northwest Ohio. I would assume northwest Ohio and northeast Ohio would be potentially better for growing barley because they stay cooler for longer and we can get too hot down here in May. Small grains like to be cooler longer.”

To maintain quality, Ramsey said fungicide applications are important. The vomitoxin levels for malting barley must be below 1 part per million.

“Fungicide is a must. I wouldn’t chance it,” he said “We have three good products on barley: Prosaro, Caramba and Miravis Ace.”

Timely harvest is also very important. If dry grain gets re-wetted there are sprouting, lodging and vomitoxin concerns.

“We average a little over 80 bushels per acre. I don’t consider it to be any more difficult than wheat to harvest. The combine setup is different than from wheat but it is in the manual how to set it for barley and it is pretty close. The biggest thing is that it is harder to handle. It doesn’t flow and it has big beards on it that want to stick you,” Ramsey said. “It has always worked out that by the time we are ready to harvest, the barley is waiting on us. We have been harvesting around 14% moisture, which is where we want to be. For drying, it is very important that you keep the temperature of the grain low. You only want air temperatures of 90 degrees flowing through the grain. If you go too high you can ruin the germination and it can’t malt.”

While there is plenty of potential agricultural benefit and interest in barley, Ramsey said it is not for everyone.

“Don’t raise malting barely if you don’t have a contract. You can’t sell it. There is no market for it without a contract,” Ramsey said. “Origin Malts’ goal this fall is to plant close to 15,000 acres and we’ll be looking for contracts in July. Once we get the quality on this year’s crop figured out then we’ll start getting contracts going for next year. We have guys planting as few as 10 acres and one guy up to around 300 acres this year. These are protected varieties and you can only buy seed if you have a contract through Origin Malt. We have one variety currently, Puffin.”

There are limited secondary markets for the barley if it does not meet the quality requirements from Origin Malt.

“We have an option to use it as cover crop if it is blended with another crop like wheat or rye,” Ramsey said. “It also makes good feed, but it is not worth nearly as much. We are still working on these secondary markets.”

As acreage for Origin Malt expands, the goal is to add more geographic diversity.

“We want a regional concept. Sometimes the northwest has good quality and we don’t further south. Our goal is to have barley raised in all four corners of the state,” Ramsey said. “So far we have been limiting our contracting until the plant is built. Construction is starting soon at Marysville.”

The malting barley grown in Ohio for Origin Malt currently must go out of state to be malted. The new facility will be a game changer for barley in Ohio, Ramsey said.

“There are some small scale operations in Ohio but nothing like what we are looking at building. Everything is on schedule and online now for construction,” he said. “That will make a big difference in the acres we need and where guys will be able to haul to. There are currently only two delivery spots lined up.”

Once harvested, all Origin Malt barley must be tested for quality.

“We require growers to put it in the bin and get it tested. Last year I think 81% made quality, but quality issues are going to happen,” Ramsey said. “We have been able to make quality all three years we have grown it, even though it is going to be sold for seed.”

Prior to Prohibition, Ohio was home to significant acres of amber waves of barley grain and, due to the returned success of the crop and increasing malting demand, it appears more will be on the horizon. 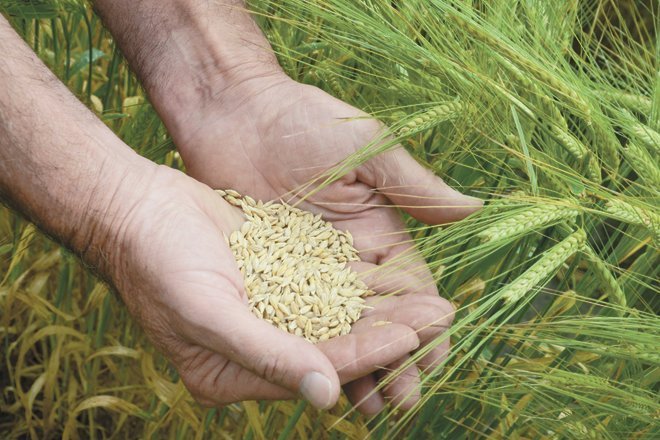