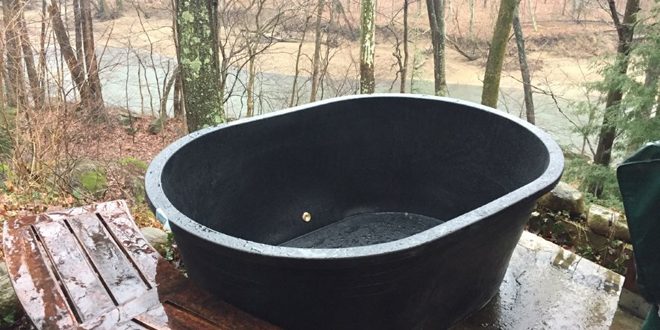 Here’s is Dan's stock tank "tub" in position at his place on the Kokosing prior to its first test run.

We’ve got a small cabin in rural Knox County my wife and I use for hunting and fishing and paddling retreats. Often we return to the cabin cold and shivering from these pursuits and have long yearned for hot tub to greet us at the end of the day, but could never justify the cost, nor do we have the power, to operate one. Channel surfing the various DIY shows a few weeks ago, I watched a clip of a guy building and off-the-grid hot tub featuring a stock tank, copper tubing and a firepit. I watched as he coiled the copper around a five gallon bucket and hooked up each end to the tank filled with 150 gallons of water, connecting one end of the pipe low on the side and one above, just below surface level. He removed the bucket from the coil, placed the spiral of copper in the firepit, filled it with firewood and lit it. Three hours and several small logs later, he had 102-degree water circulating through his tub, thanks to what is called ‘thermal siphoning.’ The process automatically causes the heated water from inside the copper coils to rise and flow into the tank via the upper inlet, drawing the cooler water below from the outlet back into the coils in the firepit for heating and eventual discharge back into the tub.

Over the past couple of weeks I’ve been perfecting my own version of the hillbilly hot tub, having purchased a 180 gallon stock tank at Rural King, an 80,000 btu propane-powered convection heater from Home Depot and 1,000 feet of half-inch diameter copper tubing from Menard’s, each costing roughly $100. The latter I plan to coil inside the heater’s chimney and use a propane flame, rather than an open fire, for a more efficient and controllable heat source. We decided on the 180 gallon tank after, to the delight of the clerk at the Mt Vernon Rural King, sitting inside several they had in stock to test for the right fit without going overboard on the volume of water we’d be needing to heat.

I plan on assembling and testing the tub during turkey season and will report on the outcome in the next issue. Unless something goes south in the meantime and you hear word of our progress via the local news…

The spring season bag limit is two bearded wild turkeys. Hunters can harvest one bearded turkey per day, and a second spring turkey permit can be purchased at any time throughout the spring turkey season. Turkeys must be checked no later than 11:30 p.m. the day of harvest. All hunters must report their turkey harvest using the automated game-check system, which is available online, by phone or at a license agent. A complete list of participating license agents can be found at wildohio.gov. Visit the Turkey Hunting Resources page at wildohio.gov, or call 800-WILDLIFE (945-3543) for more information about the game-check process.

The Ohio State Trappers Association (OSTA) concluded its annual fur auction season in Kidron on a high note earlier this month. Most trappers were pleased with the prices received, according to OSTA President Keith Daniels, who reported that there were about 60 plus sellers that sold and some averages prices paid were $4.32 on muskrats, $5.78 for raccoon and $17.44 for coyote pelts. For more details on OSTA, pricing and upcoming events, visit osta.org.

The water level in Gallia County’s Tycoon Lake is being partially lowered so crews can monitor and evaluate a small area of soil movement on the lake’s south dam. According to ODNR engineers, there is no immediate risk of uncontrolled release of water from the 183-acre lake located near Bidwell. The movement of soil material, known as a slide, was discovered by ODNR staff during a routine inspection in mid-February and the affected area measures 55 feet wide and 45 feet long.

Workers have covered the affected area with heavy plastic sheeting and sandbags to help reduce its exposure to further precipitation events. The area is monitored daily while ODNR staff looks into the cause of the slide and further response action. Meanwhile, due to the lower water levels, the boat ramp near the south dam is closed. However, once the water level is lowered, the agency is evaluating potential locations for a temporary boat access until the dam repairs are completed, and the lake level is returned to normal.

The Ohio Environmental Protection Agency recently announced that fish caught in the Cuyahoga River are now safe to eat. It has taken about a year for the proclamation to get legs, as the Ohio EPA previously requested that the federal EPA lift their restrictions after fish tissue samples showed significant health improvements. The U.S. EPA finally eased restrictions on fishing from the Gorge Dam to Lake Erie.
The EPA now recommends that if anglers catch fish in that stretch, they consume in accordance with general state guidelines, which essentially suggests no more than one meal per month of fish from the Cuyahoga.

Ohioans have the chance to see state fish hatchery operations firsthand and view this year’s fish production in progress when the ODNR Division of Wildlife hosts open houses at all six state fish hatcheries this month. The events are free and open to the public, and they have been timed to showcase fish as they hatch out and are in hatchery production buildings.

“Several family-friendly activities will be held at each hatchery, including the opportunity to see fish eggs and fry in the production buildings, as well as juvenile and adult fish in the raceways and ponds,” said Kendra Wecker, chief of the Division of Wildlife. “Other activities vary by location but include casting contests, opportunities to view electrofishing boats and archery activities.”

where fish grown include walleye and saugeye, and yellow perch at St. Marys. Pond rearing of catfish and sunfish is also underway there. The facilities at Castalia, Kincaid and London will hold open houses on Saturday, April 27, from noon to 3 p.m. Fish grown and featured in these hatcheries include rainbow trout, muskellunge (Kincaid and London), steelhead (Castalia) and brown trout (London). The following are the open house locations for April 27: 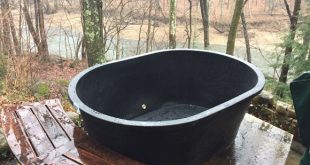