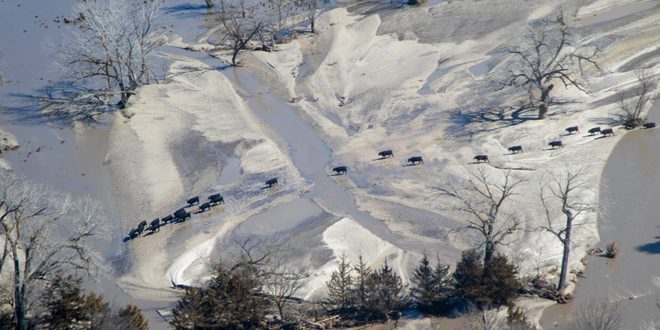 Photo by the Nebraska National Guard.

Do not withhold good from those to whom it is due, when it is in your power to act. That is the very clear message from Proverbs 3:27.

It can’t be certain this verse is top of mind for the many in Ohio’s agricultural community who are dropping what they are doing to donate, travel, work, and serve their fellow farmers across the country, but they certainly are demonstrating it.

Terrible flooding in Nebraska, Iowa and Missouri has left farms swamped and devastated generations of work on the land in recent weeks. One Ohio group of six tractor-trailers and 11 trucks and trailers filled with food, clothes, hay, feed, and hygiene products donated from farmers, businesses and church leaders from the Norwalk, Monroeville, Ashland, and Mansfield areas left earlier this week for Verdigre, Neb. An additional group from Ohio plans to leave next week. Another group leaves March 29 in an effort being organized by Greg and Rose Hartschuh in Crawford County through Ohio’s Rural America Relief.

“Last week we were watching these videos from Nebraska and the bomb cyclone with snow and blizzard-like conditions and rain and ice chunks with flooding and saw a lot of people hurting out there,” Rose said. “A lot of places just looked like an ocean. It is on a day-by-day basis. Every day they are opening up more roads. I read a story about a farmer out there. It usually takes him 20 minutes to get to his cattle but now he is going 200 miles round trip just to take care of his cattle.”

The Hartschuhs decided it was in their power to act, and this is not the first time.

“In 2017 wildfires ravaged Kansas and Oklahoma and that part of the country and my husband and I wanted to do what we could to help. It kind of snowballed from there and we ended up organizing quite a bit of hay and a good group of volunteers to head out,” Rose said. “We started kicking around the idea again. Should we do something? It took a little longer to decide this time because it did end up being a pretty big effort last time. We learned a lot from Kansas. From the beginning we said we are going to help but we are going to do it in a different way. One of the differences is that hay is harder to come by in Ohio this time. We also know that fuel costs for hay are expensive to haul it across the country.”

The Hartschuh group will include 10 trucks and trailers filled with supplies and 30 volunteers going to help lend a hand.

“Fencing is a huge need, as well as just people to help. They are talking about corn stalks a couple of feet deep in some areas. All of that is going to have to move before they can even think about planting,” Rose said. “We set up several different drop-off locations around the state for supplies and of course you can always give cash. Nebraska Farm Bureau has a relief fund set up and that money goes directly to the farmers impacted. Our group is also taking cash and we’ll use that to help defray our travel costs. We are estimating our costs will be around $5,000. If there is anything left we will give it to the Nebraska Farm Bureau fund.”

Included in the group are six senior FFA students from Wynford.

“They are really going to have a unique experience,” Rose said. “This is the kind of trip that can really change your perspective on a lot of things.”

The group is meeting in Tiffin early March 29 and headed west on I-80/90 to Schuyler, Neb. On Saturday, the supplies will be delivered to the North Bend, Neb. area. Volunteers will help with cleanup over the weekend and return to Ohio on Monday.

Those interested in donating to the effort can go to PayPal to ohiosruralamericarelief@gmail.com or use the link: https://PayPal.me/RuralAmericaRelief. Checks can be made to Ohio’s Rural America Relief and mailed to 6348 Parks Road, Sycamore, OH 44882. Any funds that are left after the trip will be donated directly to Nebraska Farm Bureau. Follow along this weekend on the Ohio’s Country Journal and Ohio Ag Net Facebook page.

Hats off to those willing to act when they have the power to do so and carry out the spirit of Proverbs 3:27. 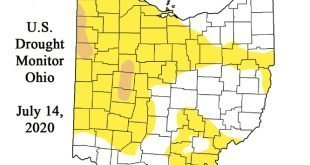