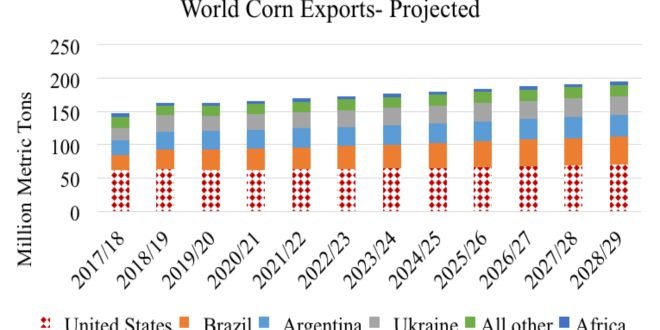 Here is a look at world corn exports for marketing year 2017/18 through projections for 2028/29. The U.S. remains the largest exporter of corn to the world and increases almost 8 million metric tons or 13% by the end of the projection period. Major changes in corn export absolute values (million metric tons) come from Brazil (20.3), Argentina (8.8), and Ukraine (10.3). Percentage growth shows emerging producers like Europe (234%) increasing their exports from a relative low position. Growth in exports from these countries threaten the share of U.S. global corn trade. Figure 2 shows the growth in U.S. corn exports projected, but also the declining share of global corn trade.

The agricultural industry is a global economy with buyers (consumers), sellers (producers) and traders. In the United States, producers of corn have a comparative advantage- the ability to produce it cheaper per unit or at higher quality- over most other parts of the world. However, genetics, changes in weather patterns, land limitations, politics and global gross domestic product affect quantities of production and consumption.

Long-term trade projections for U.S. corn published by the Economics Research Service of the USDA look positive due to the expected rise in world GDP and population; however, increases in competition from other exporting countries continue the decreasing trend of the United States’ share of world exports. Trade negotiations between the U.S. and China are in the middle of a 90-day trade truce, which ends the beginning of March. It is uncertain what, if any, resolution will surface before or at the deadline. In December 2018, commodity indices declined before the previous trade deadline, but rallied at the announcement of the 90-day extension. Long-term projections include a continuation of current policies, accounting for tariffs from Mexico, the European Union, Mexico and Canada.

The USDA World Production Report, published Feb. 8, 2019, puts the size of the 2018/19 world corn crop at slightly more than 43 billion bushels. With production in the United States estimated at 14.4 billion bushels, any reduction in world supply will likely come from Brazil’s short season corn crop.