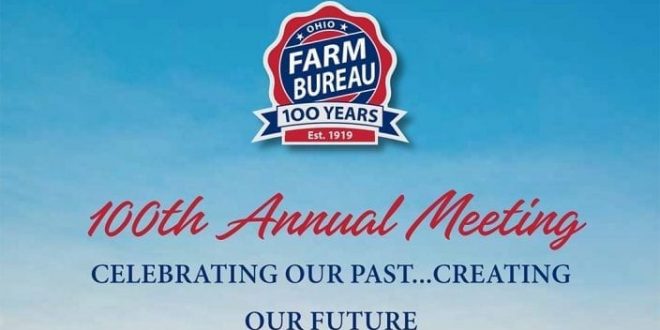 Ohio Farm Bureau Board of Trustee elections were held early on the last day of the OFBF 100th Annual Meeting. Two new trustees were elected, along with several trustees who were re-elected to their current positions.

President Frank Burkett III, Vice President Bill Patterson and Treasurer Cy Prettyman were all re-elected to their officer positions on the board. State and national policy was discussed and voted upon during the general sessions. Several membership awards and county achievement awards were announced during the annual Delegate Lunch, where Executive Vice President Adam Sharp addressed the assembled attendees at the annual meeting.

In a heartfelt speech, Sharp said he was “humbled and proud” to serve OFBF at this moment in its history.

Watch the presentations and Adam’s address:

Later tonight attendees will participate in the Centennial Celebration and a member-only concert by country star Chase Bryant at the Greater Columbus Convention Center to cap off the kickoff to Ohio Farm Bureau’s 100th year.

A warm welcome to all who came to cold Columbus today for the kickoff of the 100th annual meeting.

A historic display that takes visitors through the history of Farm Bureau opened early as members and delegates alike converged steadily on the Greater Columbus Convention Center throughout the morning. A historical presentation by Steve Hausfeld through the Nationwide Archive and two rounds of Discussion Meet kept visitors busy, as did the popular Centennial Store selling special 100th anniversary merchandise.

The Kickoff Lunch included remarks from Nationwide CEO Steve Rasmussen and Tim Corcoran, chairman of the Nationwide Board of Directors, as well as Patricia Wolff, senior director of congressional relations for American Farm Bureau.

Ohio Farm Bureau kicks of its 100th year, and annual meeting, today in Columbus. The centennial event’s theme is Celebrating our Past, Creating our Future.

Nearly 3,000 Farm Bureau members are expected to attend the meeting and a special centennial celebration concert on Friday. A historical museum and all convention activities surrounding the 100th year of Ohio Farm Bureau will be held at the Hilton Columbus Downtown and Greater Columbus Convention Center.