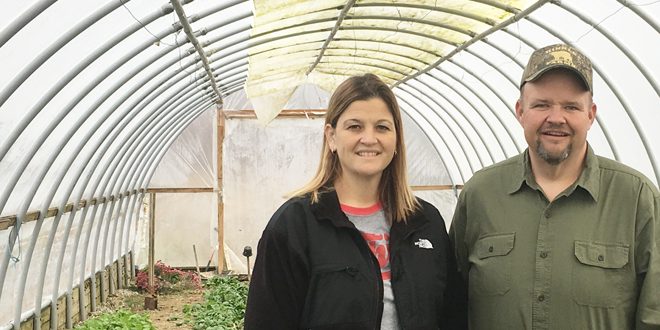 Karen and P.J. Hinkle started up a beef and produce operation in Morgan County. They are pictured in one of their unheated high tunnels that allows for year round production of greens.

An idea turned into Hinkle Farms

Seven years ago, P.J. Hinkle was a union crane operator. In his time spent travelling for work and running a crane, he had plenty of opportunities to think. One day when he came home from work he told his wife, “I have an idea.”

“I was a union crane operator for 15 or 17 years and I left all that to do all this,” Hinkle said. “When I was working construction, I might be in Cleveland tomorrow. Especially being a crane operator, I was all over the place. [I was] gone all the time. The money was good, don’t get me wrong on that, but you reach a stage in life when you think ‘Well, my little girl’s growing up.’ That’s a lot of what I do this for.”

When he was growing up, Hinkle’s parents owned a grocery store, so he has always worked with food and he wanted to make sure his family also learned those lessons.

His idea started with building some fence.

“We built some fence and she said ‘What are you going to do?’ And I put a couple goats in there and they didn’t stay,” Hinkle said with a laugh. “But the whole idea was I wanted to raise our own beef. I thought if I buy two calves, we can fatten them and sell one and have our beef for free. Well, if you do 35 or 40, that’s got to be better.”

That is just what he did. Hinkle and his wife, Karen, started buying calves to raise for meat and growing vegetables. Today Hinkle Farms grows a variety of produce in field production during the growing season and year round in unheated high tunnels for the fall market, including beets, green onions, radishes, turnips and plenty of greens for nutrient rich salads, including arugula, kale, lettuce, spinach, and microgreens. The cattle remain an important part of Hinkle Farms as well.

“I buy stocker calves. I don’t do cow-calves. Generally, I like a crossbreed — an Angus with a cross with Hereford is what I prefer for my markets,” Hinkle said.

He typically buys calves around 300 to 350 pounds.

“I’ve got a theory that you buy young calves, like 300 pounders, they don’t take much to get through the first couple months and you can usually buy them better in January,” Hinkle said. “So if I can see the opportunity that I can buy some young calves in January, I’ll put them out here, in one of my little lots. I feed them a little hay until March or April when I can turn them into one of the fields.”

Hinkle says he feels peer pressure sometimes at the auctions when other buyers are looking for breeding stock, but he knows they want something different in their calves.

“A lot of times I’ve bought better calves than what I should have, spent more money than what I should have and been very disappointed in them. Sometimes the bargain calves —some of them that need a little help — have been very good to me,” Hinkle said. “Sometimes I like the calves that maybe have a little rougher start. I don’t know that it always makes me more money, but I feel like I can buy the calves a lot of times at a little better price.”

Hinkle has a one- to two-acre lot with a barn where he starts and finishes the calves.

“Basically we bring the calves in and we get them used to us a little bit, we get them vaccinated and make sure none are sick,” Hinkle said. “Then we introduce them to our pasture.”

The pasture is around 25 acres. Because of the storms and rainfall in 2018, Hinkle was not able to move his calves to the pasture all year. He has had to cut back on the number of calves he typically raises so they can be managed in the small finishing lot by his home. Currently, he has six steers in the lot that weigh around 1,100 to 1,200 pounds. Typically, at this time he has around 12 that should be moving off the back pasture to be finished before butchering.

He does not like to have more than 12 or 15 calves in the finishing lot at a time, for safety and comfort reasons.

“Comfort means a lot to me for the animals. I know there’s some equations for how many square feet for the building and all this and that. But if it gets bad and I’ve got to put them in on the concrete for a little while, I at least like them to be comfortable. I don’t like that idea of everything shoulder to shoulder,” Hinkle said. “It creates a lot of other issues.”

In an ideal year, Hinkle would buy younger calves in January and move them to the back pasture around March or April to eat grass.

“Basically that’s what they get all summer. And to just keep them honest, we go back and give them a pound or two of grain per head every day. That’s how we can control them. That way they come in to us when they hear us,” Hinkle said.

Hinkle believes if his pasture is managed correctly he can operate with more cattle.

“Economically, any time you can run more cattle on the same amount of acres, it’s to your benefit,” Hinkle said.

When the calves reach Hinkle’s ideal size, he has most of them butchered to sell meat from his farm and at farmers markets. Roughly 20% of them go to the stockyard to be sold at an auction.

“There are two different markets. When you’re selling at the auction, they need to be huge, 1,400 to 1,500 pounds,” Hinkle said. “For ourselves, when I butcher a beef, for the best yield for us, depending on the frame and everything of the animal, I like an animal that’s going to be in the 1,100- to 1,200-pound range. That’s for a good yield and return.

Raising calves and local produce is more than profits to the Hinkles.

“It’s profitable, but at the same time, it’s a good way of people getting local meat. I think more than anything it is important that they know where it came from,” Karen Hinkle said. “A lot of people come out here, they see what we have, our practices and everything. And they feel better buying off of a farmer, buying off of someone when they can see what their product is.”

The Hinkles give credit to their local community and customers for spreading the word about their farm and what products they offer. P.J. said they have several families that continue to buy from them throughout the year.

“They know they can trust us, they know what they’re getting, they’re satisfied, and we try to be reasonably priced,” he said. “I can still look people in the eye when I tell them how much my steaks are or hamburger is. You’ve got to be responsible and not overcharge people. Just because you grew it doesn’t mean it’s priceless. It’s still got a marketable value. We don’t want to be the cheapest around, or a bargain rate, but we want to be something that you can afford to buy and utilize.”

To be allowed to sell meat at markets and on the farm, Hinkle needed several licenses, which can be quite expensive. One of them, the Mobile Food License, is the same license needed to sell eggs at the farmers market. The Hinkles decided to raise chickens to offset some of that cost. They have around 100 laying hens for the market season then sell them to a family member in the fall. The Ohio Department of Agriculture inspects their facilities each year to ensure compliance.

“It all comes at a cost, but it also gives us an opportunity to offer our products,” Hinkle said.

Like most farmers, Hinkle has “made a truck load of mistakes.” He has also had his share of difficult times. Handling the cattle is a continual challenge. He stresses the importance of having the proper infrastructure and facility to run cattle.

“I am still nowhere where we should be on handling facilities. The loading and unloading, that should be priority number one for anybody that’s starting into it. And I’m still catching on to that because I think ‘Oh, I can still get by,’” Hinkle said. “A good head chute works better than pinching them with a gate in the corner.”

Hinkle finds his weak spots with infrastructure the hard way. For example, a couple weeks ago one of the steers got in a pen by himself and could not figure out how to get back with the other claves. He tried to jump a five-foot wall, tore part of it down and got stuck.

“There’s always a train wreck coming,” he said. “I’ve been lucky though too. I have.”

Hinkle encourages anyone wanting to get started in farming. He is always willing to share his methods and thoughts with anyone, because he does not think they are secrets. Hinkle says if you want to grow your own produce, put a tomato plant in your back yard. If you have a few acres, get a couple animals, he said. “Sometimes you’ve got to quit thinking about it and you’ve just got to do it.” 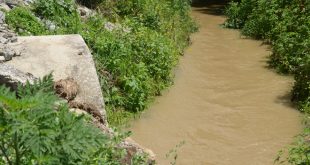 No vote on community rights in Williams County, yet