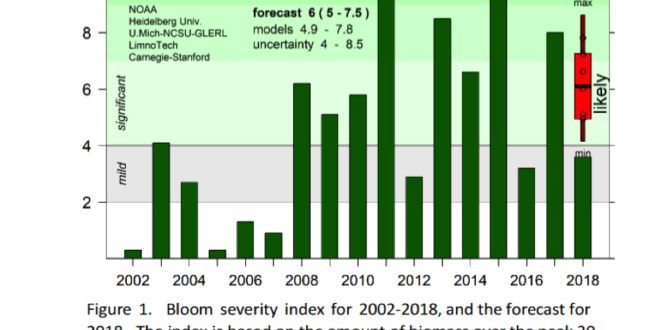 HABs in the Western Lake Erie Basin since 2002.

Lake Erie wasn’t as bad as expected this year with harmful algal bloom severity coming in below expectations — at a 4 when it was predicted at 6. I have seen several remarks as to why. It wasn’t due to reduced nitrogen or phosphorus flowing into the lake, it was due to windy conditions this summer.

But we are under a pending distressed watershed order for eight watersheds in northwest Ohio. We will see what happens next February when the Soil and Water Conservation Commission meets again.

For the rest of Ohio outside of the Lake Erie Watershed, the area of concern is the dead zone in the Gulf of Mexico. NOAA-supported scientists have determined that this year’s Gulf of Mexico “dead zone” — an area of low oxygen that can kill fish and marine life — is approximately 2,720 square miles, an area about the size of Delaware. This summer’s dead zone size is the fourth smallest area mapped since 1985 and is smaller than the 5,780 square miles forecast by NOAA in June. It is much smaller than the record setting size in 2017 that hit 8,776 square miles. Researchers said the same thing for the Gulf that was said for Lake Erie, strong westerly winds reduced the size of the dead zone.

We at OSU will continue our efforts to share with producers and consulting agronomists how to reduce the water quality concerns for both northern and southern Ohio. I think there are new tools that we can put in place to start movement towards reducing nutrient loss to our waters. They are: