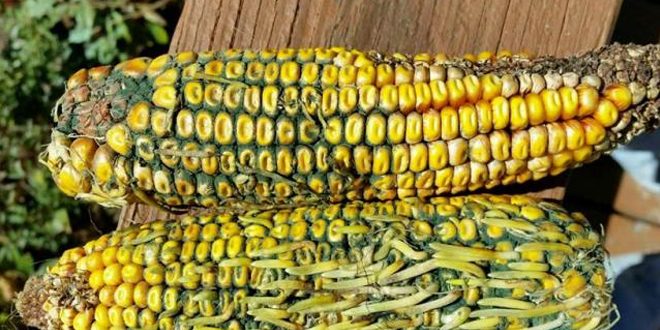 We have received several reports of premature corn kernel sprouting across Ohio. The ear in the picture exhibiting premature sprouting was sampled from one of the Ohio Corn Performance Test plots at the NW Research Station and was associated Trichoderma ear rot. In this particular case, the fungus that causes the ear rot produces compounds that stimulates early germination. However, not all ear rots are commonly associated with premature sprouting. In fact, under the right set of conditions, this phenomenon may occur in perfectly healthy ears, without visual disease symptoms. In addition to ear rots, a combination of other factors, including erect ears, bird damage, and wet weather, may contribute to premature sprouting.

Premature sprouting is most likely to occur when reasonably dry kernels (less than about 20% grain moisture content) are re-wetted, especially when temperatures are warm and ear dry-down in an upright position. Rainfall collected by husk leaves on upright ears often leads to kernel sprouting near the butt of the ear. Premature sprouting also occurs when ears are lying on or near the soil surface due to severe stalk breakage or lodging. In such situations, the proximity of ears to moist soil allows a similar re-wetting of the kernels and extensive germination on the cob. The problem is usually limited within fields but if it’s evident across a field it has the potential to cause drying and storage problems.

Ears with sprouted kernels are usually lighter than healthy ears. In some cases, this “lightness” can reduce grain yield and test weight. Sprouted kernels are also more likely to develop molds that are associated with mycotoxins. This could result in price discounts if the problem is extensive. Often, during the harvesting and drying processes, sprouts will disappear, and grain will appear normal. Fields showing widespread sprouting should be prioritized for early harvest. Dry grain at to prevent further growth of the young seedlings and screen the grain prior to storage to reduce the amount of damaged grain and seedling tissue.

For more details on premature kernel sprouting, check out the following articles from Ohio State, Purdue, and Missouri.