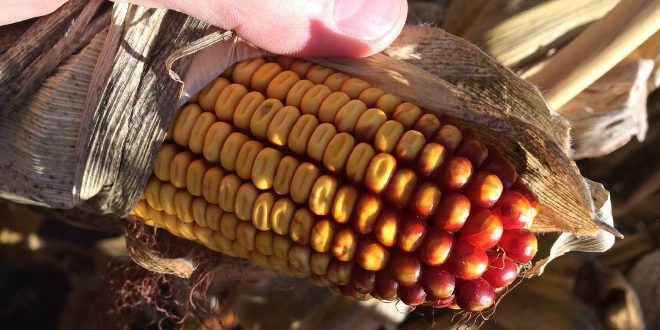 One common occurrence observed by growers and agronomists at when corn begins to mature is a red coloring of the normally yellow pericarp of corn kernels. Kernel Red Streak (KRS), pictured top left, results from the development of red pigment in corn kernels caused by wheat curl mite feeding on the kernel seed coat. According to Purdue’s John Obermeyer and Christian Krupke in the 2015 issue 25 of the Pest and Crop Newsletter; “There are two suspected mechanisms causing the red streaking. One is the triggering of anthocyanin, a red pigment, in the pericarp as a response to mite feeding. Hybrids vary greatly in how much and where anthocyanin accumulates (e.g., purple seedling corn under cool, wet conditions). The other is the elicitation of another red pigment, phlobaphene, that determines cob (white vs. red), pericarp (great variability as shown with Indian corn), and silk (yellow vs. pink) coloration”

Just like purpling of a corn plant itself during the growing season varies by genetics, so does KRS. In a field where multiple hybrids have been planted, only one may exhibit the symptoms of Kernel Red Streak if wheat curl mite feeding occurred. This is especially evident for anyone who has walked a test plot and pulled back husks of each hybrid to inspect kernel set and grain quality.

While the pigments causing KRS change the appearance of kernels, it is important to keep in mind that there is no documented relationship between Kernel Red Streak and ear molds . Additionally it should also be noted that KRS does not negatively affect nutritional value or create toxins. For more information and pictures of Kernel Red Streak
click here.