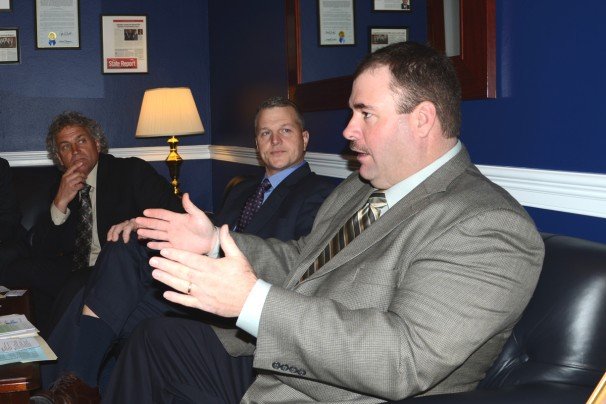 Ohio's Anthony Bush talks about the farm bill in the office of U.S. Representative Bob Gibbs.

Anthony Bush, a Morrow County farmer who is finishing up his six-year term of service on the National Corn Growers Association Board (interviewed by Dale Minyo)

Q: How many years now have you been running around the countryside serving corn growers on several different boards?

Anthony: I’ve been on the National Corn Growers Board for six years. I actually term off here at the end of September. So, I’ll have completed my eligible service and I can’t believe how fast six years went, but it sure has been rewarding.

Q: Let’s talk about that, because as people think about volunteering time, and serving local boards, state boards, or in this case, national and probably some international travel. As you look back on it, was it the right thing to do?

Anthony: Oh, it absolutely was. I just feel like I’ve grown as a farmer and, in some cases, grown from hotel food too. But when guys take these trips, it’s work. You know, all the airports, all the hotel rooms, they all look the same to me. And it’s just a matter of what you get done while you’re there. Sometimes it’s the small little battles you win and sometimes it just takes a while to see results. In the next couple weeks we may see a Reid Vapor Pressure fix out of the Trump Administration. We’ve been working on that through three administrations for at least 10 to 15 years with the Corn Growers and that will be a very big thing for corn grind.

Q: As you look at the role of anyone trying to lobby people in Washington, what kind of reception do you get? Can you actually sit quietly in their office and have an enjoyable conversation with them?

Anthony: Well, you know, some of them are better than others, but the majority of the ones we meet with here in Ohio, and I’ve been in on other meetings where you meet people who aren’t necessarily friends of agriculture, and those are more challenging, but they vote too. And you have to get to them. Most of the ones here in Ohio are just fabulous to work with. They’ll listen to you, they make time for you, they’ll do their best. We have some, of course, that are better than others, but anytime you can go and meet with the person casting that vote or making that decision, believe me you’re making a difference.

Q: I’ve got to believe that through all those experiences, the other farmers who do similar things from other states have been a tremendous value as well. Is that the case?

Anthony: Oh, some of my best friends live five states away. And there are some extremely smart people who care more than you can imagine about the industry and things that we’re facing. years down the road from water quality to the guys who worked to build the ethanol industry back in the ‘70s and ‘80s and if it weren’t for that, I don’t know where American agriculture would be right now, no matter what crop you’re growing.

Q: What’s next for you? Is there another something? When I asked you earlier if there would be another national board, another whatever, you said “Well maybe the next thing for me is just to come home and enjoy that.” Tell us more.

Anthony: Well, I’ve got a 19-year-old son coming back to the farm here and I kind of look forward to being home and helping him along. He’s the future of our operation and I look forward to that. There’s some other doors that may open for me. Once you’ve been so involved in this, you can’t just shut it down. You’ve made so many contacts and know so many people and friendships. There’ll be another door opened. I don’t know what that is yet.

And my daughter’s back closer to home. I’m so excited for that. She’s working for the Ohio Farm Bureau in Columbus and she just tells me “Dad, I get to talk to farmers all day. I get to write about farmers. I get to advocate for farmers.” Her passion for agriculture is as great as anything anybody that plants a seed does.

Q: As you take a look at where we are and where we’re going, what should others be doing right now? Where can we start to have an impact?

Anthony: Well, here locally in Ohio, it’s water quality, water quality, water quality. The next governor is going to have a lot of impact on that. Hopefully, we can undo some of the things the current administration is trying to do. There are many things with water quality that we’re going to have to address, whether we like it or not. I have friends in the Chesapeake Bay watershed that have been dealing with this for 20 years. And I just see the day coming where nutrient management plans are going to be mandatory and guys are just going to have to embrace the change. And my friends over east tell me that, yeah it wasn’t fun to get used to but after they did it, it actually saves them money and they are best management practices.

Q: In agriculture, we’re a part of the puzzle and we’ve often been asked the question, why aren’t others getting as actively involved in their portion of the puzzle?

Anthony: Unfortunately, agriculture is the low hanging fruit. You know, my friends out in Chesapeake Bay have told me, hey, you know, we did everything they asked and they came back and wanted us to do more. And we keep doing more every day, but at some point the others — home septic systems, yard maintenance, city sewage plants and things like that — they’re going to have to be scrutinized heavier than they are.

No politician will ever solve this problem. It’s going to take a concentrated effort from every part of science and agriculture and civil engineers and Army Corp of Engineers — it’s going to take all of us to solve this. I just saw something where there’s an algae bloom in Lake Superior now. And there’s no agriculture up there to be causing an algae bloom, so what’s causing it? There are still a lot of questions to be answered. Yeah, sometimes, politicians talk out of both sides of their mouth, but I only get my news from the Ohio Ag Net.

The good news is the effort that is being done by agriculture that is just not well enough publicized. And farmers don’t need to be publicized they just want to do the right thing and be the best steward of their land.

Q: As we look to the big picture now, we talk about the tariffs, it’s interesting that we kind of looked at what the present administration’s doing and working with Mexico only because Canada didn’t seem to want to talk about it. Now all of a sudden, Canada might seem a little scared that we have an agreement with Mexico and you guys are going to have to figure it out.

Anthony: Yeah, so Canada comes rushing back to the table and there’s still many things to be settled with the Mexico agreement yet, but some of the major hurdles were addressed that really needed to be done to get Canada back in it. The steel and aluminum tariffs, I don’t believe have been resolved yet and there’s still a lot of issues within the automotive industry that have to be settled yet between the three countries.

Hopefully, we’ll see some movement on this before the midterm elections and President Trump can keep doing what he says he does best, and that’s negotiate deals.