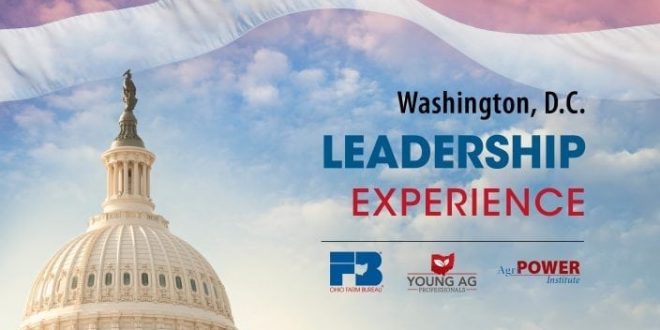 Ohio Farm Bureau’s AgriPOWER Class IX and Young Ag Professionals group spent an educational three days in Washington, D.C. Sept. 11-13. The purpose of the trip was to share their ideas with members of Congress and to learn about international agriculture and how to grow personally and professionally. The trip included a visit with congressional representatives, meeting with American Farm Bureau staff members for industry and issues updates, a behind-the-scenes look at how Washington really works, networking with other young professionals, and exploring a world view of agriculture during a visit to an embassy.

Day 3, Thursday, Sept. 13
The third and final day of the Leadership Experience was focused on congressional visits. The hallmark of the trip is the opportunity for our members to meet with their representatives, bringing relevancy of the national issues facing agriculture to their farms and businesses in Ohio. Before heading up to the Hill, the group had the fortune to tour the White House. Participants were amazed by the history and tradition of the building, and marveled at the fact that many of the areas are still in active use for receptions, diplomatic meetings and other activities. The security lines and tour were so efficient that it allowed for extra time before heading to the Hill, which gave the group the opportunity to visit Iwo Jima.

“The best part is getting to meet all the other individuals from the other counties and see the different operations. The diversity of the programs, backgrounds and operations that everybody has come from is very interesting, and I’ve learned so much just from that.” – Jenna Gregorich, Coshocton County Young Ag Professional

Between congressional visits, attendees were able to spend time networking and discussing issues of local interest from their farms. Overall, the participants deemed the meetings a success. The attendees were impressed at how receptive the congressional leaders were to their questions and hearing about the issues presented. Some were pleasantly surprised to see how familiar staffers were with agriculture and how understanding and supportive they were of the industry and its struggles.

“Just to know that the lobbyists in Ohio are working with American Farm Bureau and for Ohio farmers, connecting all the messages. One voice is truly is heard here, and we get to be part of that, and that is truly something special.” – Bailey Morrell, Wayne County AgriPOWER participant 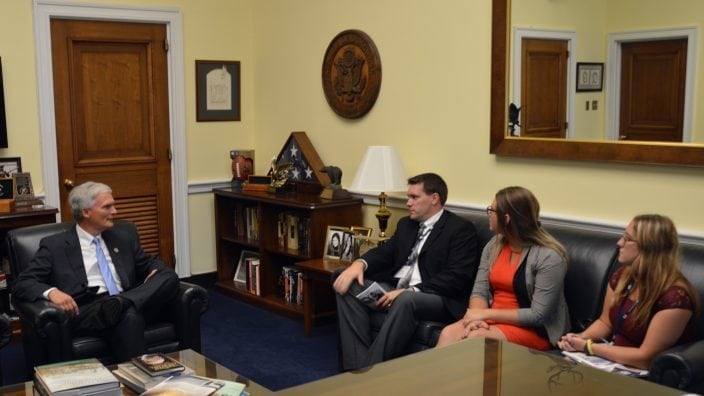 There were a total of 14 Congressional visits, including Rep. David Joyce,  Rep. Bill Johnson and Rep. Bob Latta.

Later in the afternoon, the group had the privilege to hear from key staff from the Senate Ag Committee to learn more about the process of how the farm bill comes to be written. They received reassurance that discussions are continuing and there is earnest interest to complete the work and send the farm bill to the president for his signature.

“It’s always great to see farmers and agricultural leaders from across the state coming together to learn about public policy and advocating on behalf of our industry. I’m thankful to work for an organization that has so many passionate people,” said Jack Irvin, OFBF senior director, state and national affairs.

Day two began with a somber but informative discussion on the opioid epidemic, focusing on the particular struggles in the rural U.S.  The group welcomed Betty Ann Bryce, senior policy adviser at the United States Department of Agriculture and staff lead on Opioids Initiatives. While opioid misuse is primarily a public health and safety concern, USDA Rural Development’s involvement in working on solutions, particularly pertaining to rural communities, is a perfect complement to the other agencies currently involved. Seventy-five percent of those surveyed report challenges with the opioid epidemic, and one segment that is largely affected is employers. Difficulties in staffing a workforce result in companies and farmers either importing employees or leaving a community, which can affect local, rural economies. Bryce’s team is working on increasing dialogue in these communities, identifying treatment challenges and addressing issues that stall progress and change, such as shame and stigma, access to treatment and even disagreement on treatment options by community leaders. Tactics that have been successful include illustrating through personal stories and testimonies of how opioid addiction has touched the lives of many, illustrating how no one and no community is immune, and helping leaders to see that the epidemic has a ripple effect, as communities become no longer worth investing in. 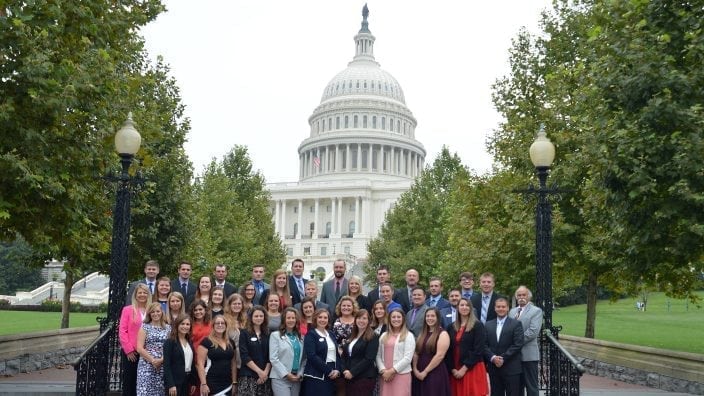 After the morning session, the group headed to Capitol Hill for a tour and photo opportunity. The tour guide was prepared for the Farm Bureau and she included details directly pertaining to agriculture from our forefathers and even the architectural features in the Capitol Building. She specifically pointed out the statue of Norman Borlaug, “Father of the Green Revolution”.

A strong Ohio FARM economy is a strong OHIO economy 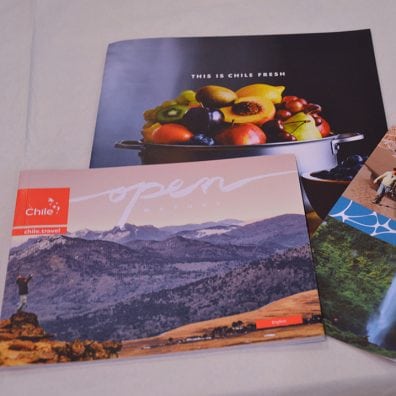 The day concluded with an informative and entertaining visit to the Embassy of Chile. The group learned a great deal of facts and details about the country, including its major exports and growing environment. Chile stretches a large portion of the west coast of South America and has a diverse geography, climate and production. The country has 16 different climates and sub-climates, and most closely resembles California in its agriculture. Because of its isolation due to the Andes Mountains and coastline, it is free of most disease and pests that can affect trade. The country has free trade agreements with 80 countries. It is the No. 2 producer of salmon, and because its pork industry is growing, the country relies heavily on feed imports. Thank you to Eduardo Santos, Javier Chaud and Felipe Gajardo for being excellent hosts. 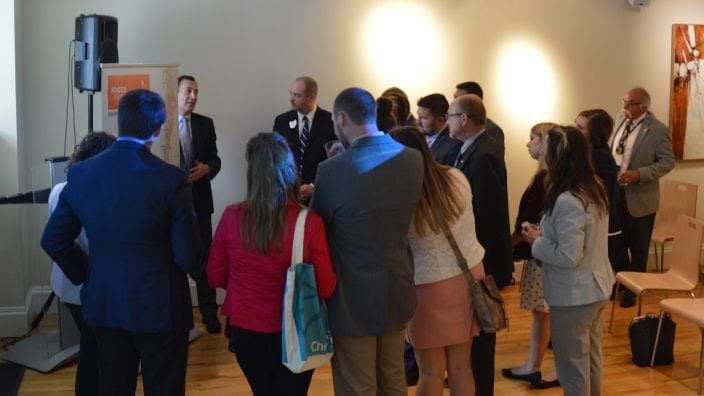 Day one in Washington, D.C. was filled with excitement and anticipation. The AgriPOWER and Young Ag Professionals groups were eager to meet each other and learn more about the different programs and each other, as well as familiarize themselves with the scope of national issues confronting agriculture. The group’s first day was focused on preparing for productive congressional visits. 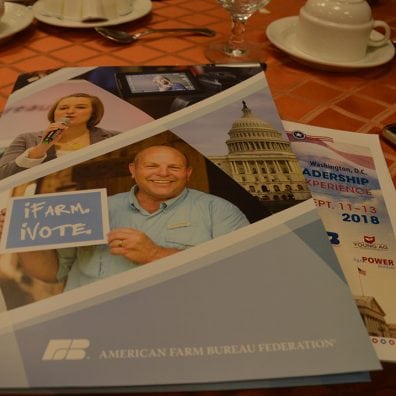 Representatives from American Farm Bureau presented details on a variety of issues including trade, immigration and the farm bill. These three topics have a major impact on agriculture through the country, however each individual farmer has varying knowledge and concern about each area. While migrant labor is a great concern for local produce growers, trade and tariffs are more concerning to the commodity farmers. The participants appreciated learning more about their own areas of concern, but also gained a greater understanding of their fellow farmers’ perspective. 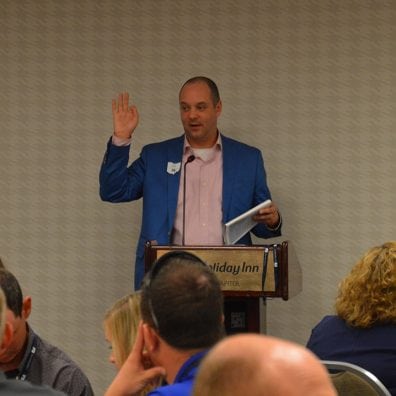 After the AFBF briefing, Jack Irvin, OFBF senior director of state and national policy, led a discussion on how to take the broader national issues down to a local level. Everyone then broke off into groups to discuss and prepare for the week’s congressional visits.

A full first day ended with a delicious BBQ dinner at Hill Country, followed by an entertaining and educational night tour of the national monuments. 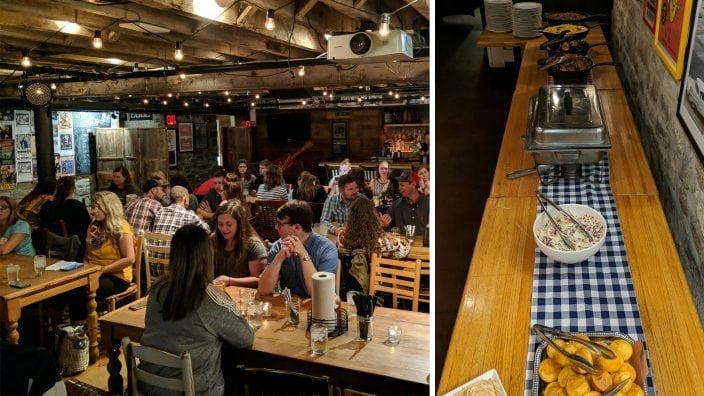 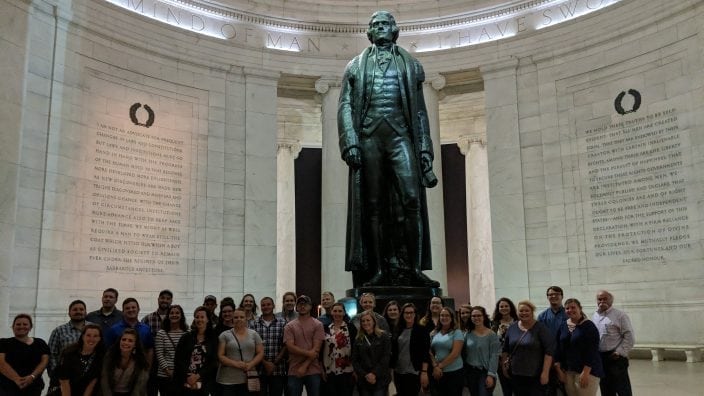