Adult moths (what we monitor in the traps) will be making their way into corn fields where females will lay eggs on the uppermost portion of the flag leaf. Eggs are laid in unevenly distributed clusters of 5 to 200, but averaging about 50 per cluster, and hatch within 5 to 7 days. Eggs first appear white, then tan and then a dark purple. Once eggs turn purple, they will hatch within 24 to 48 hours. In pre-tassel corn, caterpillars will move to the whorl to feed on the flag leaf and unemerged tassel. Once the tassel emerges, larvae then move to the ear, while feeding on corn pollen, leaf tissue, and silks. Later they will enter the ear through the tip, or by chewing through the side of the husk. Damage occurs from both direct feeding and from mold problems at feeding sites.

Female moths prefer to lay eggs in pre-tassel corn approaching tassel, so check such fields first. To scout for eggs or larvae, choose at least 20 consecutive plants in 5 random locations and inspect the uppermost 3–4 leaves for eggs, as well as the silks for larvae if tassel has emerged. Be sure to inspect different areas of the field that may be in different growth stages. For field corn, if 8% or more of the plants inspected have eggs or larvae, consider treatment. For sweet corn, consider treatment if eggs or larvae are found on >4% of plants for the processing market or on >1% of plants for fresh-market. Bt corn with the Cry1F trait can no longer be relied upon for good western bean cutworm control, so these fields should be scouted too. These include Herculex I, Herculex Xtra, SmartStax, and others.

If infestations exceed threshold, many insecticides are available to adequately control western bean cutworm, especially those containing a pyrethroid. However, as with any ear-burrowing caterpillar pest, timing is critical. Insecticide applications must occur after egg hatch, or after tassel emergence, but before caterpillars enter the ear. If eggs have hatched, applications should be made after 95% of the field has tassel. If eggs have not hatched, monitor for the color change. Hatch will occur within 24 to 48 hours once eggs turn purple. To search for larval injury after it has occurred, search the corn for ears having feeding holes on the outside of the husks. 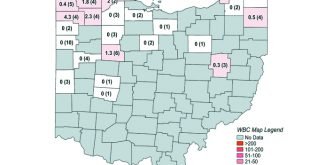 Watch for mid-season pests and diseases