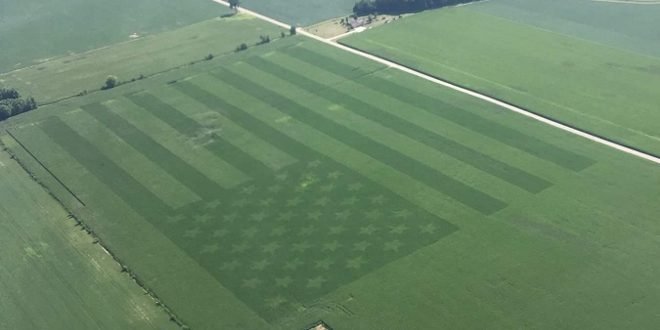 A multi-hybrid symbol of patriotism

It must have been quite a sight for Joe Singleton and his son as they flew over the beautiful mid-season landscape of Darke and Preble Counties, but among the thousands of acres of lush corn and soybean fields, something extraordinary caught their eyes — a multi-hybrid American Flag. 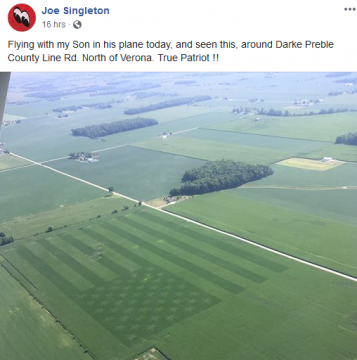 After they posted the picture on Facebook, I had to find out who this field belonged to. It didn’t take long thanks to some social media friends.

“We have a John Deere corn planter that was capable of doing something like this and I have seen other farms do some creative things with it,” said Bill Meyer, who farms the 50-acre field all decked out in stars and stripes. “I was pretty confident with this particular field’s performance and I thought we could do something fun and the American Flag was the first thing that popped in my head.”

Meyer didn’t know how long it would be until somebody noticed. He doesn’t live in a high traffic part of the state — on the ground or in the air.

“I was wondering how somebody actually saw it,” Meyer said. “We live somewhat close to Dayton International Airport but I’m not sure I have seen many planes fly over that field.”

Meyer was planning to fly a drone over the field in the coming days, but after seeing this picture on social media he is pleased with the result. He is already thinking of a design for next year.

“I have been tossing some ideas around, but we have not come up with anything definite,” Meyer said. “We have a larger field that would give us more space and some room for creativity so we will see what happens.”

That next design will be in the hands of Grant Davis with Integrated Ag. He is the mastermind behind Meyer’s Old Glory tribute.

“I saw the results for the first time when I came across the post of Facebook and was pretty proud that I did that design,” Davis said. “You never know how it will turn out but that part of the state has had ideal weather. It worked out to be a pretty great project.”

The idea came from Meyer back in February and Davis took it from there.

“He was working with his Seed Consultants dealer, Dave Kress, to get the hybrids that would contrast the best for this pattern,” Davis said. “About a week before planting season I took an afternoon to sit at my desk and wrote the script. I had never done anything like this before. After I gave Bill the script, he showed me the results from the planter after he was in that field and we thought it would work. Now here we are in the middle of the season and it looks awesome.”

Changing hybrids on the fly