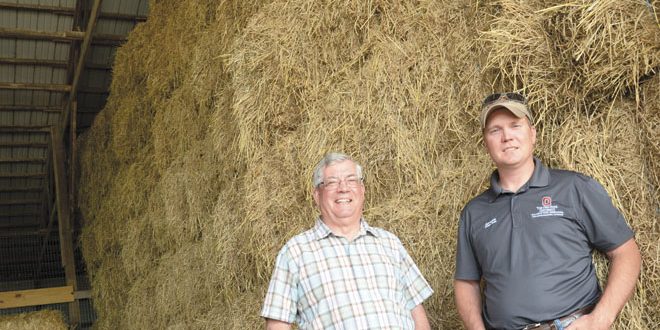 Ed and Al Gahler bale hay together on their family’s Ottawa County farm.

Hay production fills barns and roles on the farm

In the heavy lakebed soils just off the shores of Lake Erie, hay is an important part of the Gahler farm, though not necessarily an easy fit. Hay compliments the cattle and row crops for the farm and capitalizes on the unique soils.

“My Grandpa and his brother had a dairy and sold out in the late 60s. Dad and his three brothers began taking over after that and in addition to the grain crops they grew several specialty crops over the years. My uncle Ed started the hay operation, making small bales for primarily horse markets in the late 70s,” said Al Gahler, who is now involved in the hay operation with his uncle. “It is a completely alfalfa-based program. In relation to other crops we have a higher percentage of hay in this area. With our lakebed clay soils the alfalfa does really well in the crop rotation. We can get a good hay crop even in a drought year. We don’t want a drought, but a touch on the dry side is better for everything in Ottawa County. Last year was almost perfect for hay here. We were baling hay on May 15 last year, which is the earliest ever. When grain farmers think it is too dry we go out and make good hay.”

The hay operation has evolved significantly over the years for the Ottawa County farm.

“We were all small square bales on 50 acres doing everything the old fashioned way loading on wagons and stacking in mows. We began expanding the hay operation as my generation became more involved and in 2011 we bought a big square baler. We went from 150 acres of small bales up to around 400 acres now with 90% big bales. We also bale around 500 acres of straw and we put up a total of about 6,000 big bales of hay and straw a year,” Al said. “Most of our fields are mixed. Only 25% of our hay is 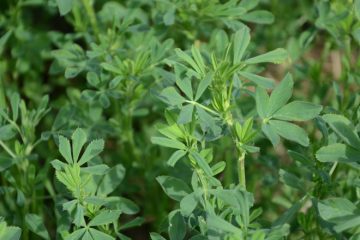 pure alfalfa. Everything else has a timothy and orchardgrass mix. There is a crimper on the haybine so it is a one-pass system of cut and crimp. Then we ted if needed depending on the conditions. We use a tedder a lot more on those foggy mornings in August and September. In a perfect world it is a three-pass system: mow/crimp, rake and bale.”

The weather, of course, makes the situation far from perfect.

“Weather is by far the biggest challenge,” Ed said. “Normally you need three days of drying and sunshine to get hay dry. If we get a wind off Lake Erie it takes moisture off the lake, drops the temperatures and hay takes an extra day to dry.”

To speed up the process, a liquid preservative is applied to the hay through the baler.

“You need it 15% moisture typically for dry hay but with the preservative we can bale into the low 20s and gain quality because we retain more leaves. Without it we’d have to cut production by 25% because we’d never get it all dried and done,” Al said. “We also wet wrap when we can’t get it dry. We maybe do that with 10% of the crop each year. Then it is essentially for the dairy or beef market. It costs more to make and there are logistical challenges because you’re hauling half water, but you can store it outside. It limits the markets because only a small amount of people can handle those. You can’t puncture the wrap because it will spoil and you need the right equipment to handle them.”

Hay is generally produced for at least 5 years in a field.

“Typically you budget for a 5-year stand but depending on management you can get 7 to 10 years out of a stand. Those higher management fields only stay in production 5 years. To get high quality dairy feed it needs to be cut every 25 to 30 days. The dairies need the best quality, which requires the most management. For horses, it just needs to be made properly and there is typically grass in the mix,” Al said. “We do GPS grid sampling at least every 3 years. Typically we spread fertilizer after first and third cuttings for replacement value. In the years we are not soil sampling we spread based on replacement of tonnage from that field. We look at harvest records and spread accordingly.

“In the years we soil sample, we may GPS spread fertilizer to match higher application rates with the highest production areas of the field, and the low yielding areas won’t get as much since less crop means less nutrient removal in those spots. We match the amount of P and K pulled out of the ground with a spilt application. We use very little N because the alfalfa is providing N for the grass. The other challenge fertility wise is lime because the pH is important. We lime maybe every 3 or 4 years, depending on soil tests.”

Each field has to be managed based upon the specifics of the situation.

“For dairy hay you want to cut four or five times to maximize quality, but a successful year is cutting three times off of all your acres. Those fields with less alfalfa are cut less often because we don’t get the grass growth in the summer,” Al said. “We shoot to start baling by May 20 and we like to be done by Sept. 15 to preserve the health of the plant. The plant needs 30 days of growth before a killing frost to properly prepare for winter, but if you have good dry weather with a good re-growth on the crop in late September, it can be tough to walk away from that crop from a cash flow standpoint. But if there is no top cover and you get an early frost, you expose the crown of the plant to heaving and disease problems. Then, come greenup, your plants are slow to start and may experience crown loss.”

Keeping a watchful eye for disease and insect problems is important.

“Disease issues like crown rot can show up if it is wet and we can lose a whole crop. You really struggle to even get it established in wet ground. Alfalfa is not a wet tolerant plant, and there are also fungal issues,” Al said. “Occasionally — not very often — we’ll spray fungicides but they are expensive. In an extremely wet year that fungus will work its way up the plant and kill leaves. Fungicide preserves leaves but it also makes for a longer drydown period.

“Most years we do use one application of insecticide, maybe two. Alfalfa weevil can really hurt leaf development on the first cutting. We primarily use airplane sprays, since you would damage so much of the crop with ground application. We spray for alfalfa weevil in May and potato leafhopper sometimes requires a second application in summer. It shows up every year and is more severe in dry years. We use research-based thresholds to determine if and when to spray, and to make sure the insecticide will pay for itself. Most of the products can be used seven days before harvest but some can be up to 14 days while others are only two or three, depending on the rate.”

After the hay crop, the field goes into a row-crop rotation.

“You want to take advantage of the nitrogen from the alfalfa, so after hay we go with corn,” Ed said. “Then we go beans to wheat back to hay. Sometimes we have two or three grain cycles before going back to alfalfa.”

Once a quality hay crop is made it must be stored properly to maintain its value. Proper facilities have been a large investment for the farm.

“Our storage barns are pole buildings for the big bales. They look more like machine sheds,” Al said. “Concrete floors can sweat. We have found that blacktop is the best flooring. Bales will perspire and push moisture to the outside of the bale. Blacktop is breathable and it does not sweat like concrete. And moisture from the bales just sits there on concrete. We also store straw on the bottom so we don’t have ‘bottom’ bales of hay that are slightly damaged and less marketable.”

Along with the countless production challenges of hay comes a set of endless marketing challenges.

“At least 50% of our hay goes to horse markets. A good portion of that goes to eastern Ohio in the Amish/Mennonite corridor. More of them are using big bales, especially if they have boarding facilities or brood mares,” Al said. “They either have a tractor or skid steer now or neighbors that will unload and stack for them. Some of them wheel the bales around on dolly carts and feed a slice at a time. Some of the benefit for them is cost but also convenience. If they can find a way to get the big bales in the barn they make it work with less labor. The pure alfalfa goes to dairies in the east.”

The prices for the hay are set based upon hay auction prices.

“Most of it is sold direct, some is picked up here and some delivered. When we deliver, many buyers do not have large storage areas and we are only taking loads of 20 to 24 bales at a time and it creates a challenge for logistics. We sell some at auction, maybe 10%. Some goes through brokers. When we get out of state markets it can be expensive to ship, but we send a lot of straw out of state,” Al said. “Reputation is really important in marketing, especially out of state. If you want to sell hay at a good price you need to deliver the quality you promise.”

A good buyer/seller relationship is extremely important for hay.

“You have to find customers you feel comfortable dealing with,” Ed said. “The Amish guys we work with want good hay and they don’t want to go spend a whole day at the sale so they are willing to pay good prices for it. Many of them are not farming anymore but they are still using horses for transportation to off farm jobs like making cabinets, and those that are farming need the best quality hay for their work horses.”

The hay business is definitely hard work, but it fits in well with the cattle and grain operation. And with proper care, marketing and production techniques, hay not only fills the barns, but also valuable economic and agronomic roles for the Gahler farm.