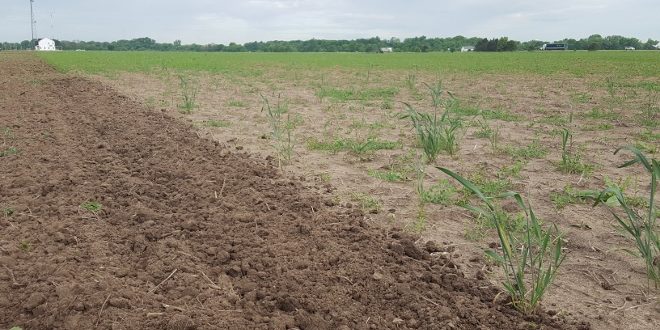 Ground being worked in Wood County

As you go north in Ohio, things go south

For the past two weeks, I have been contacted about the woes that farmers are facing in northern Ohio. Cold and wet conditions well into May have pushed back planting progress in a part of the state that is becoming use to this type of pressure.

“We are just about a week later than last year,” said Wood County farmer Kris Swartz on his Cab Cam video earlier this week. “We have seen this type of spring so much over the past 4 years that I think this is becoming our new norm.”

Swartz has made some nice progress since getting started with his planting season late last week. He is finished with corn and about halfway through with the soybeans. But as you drive around his area it is easy to see that many producers have not been so fortunate.

As I made my way to Swartz’ farm on May 30th, I decided to do a mini crop tour, of sorts, so I stopped in each county on the way up Route 23 and I-75 to compare just how things deteriorated the further north I headed.

My first stop was in my home county, Delaware. We have had just about normal conditions in this part of the state and farmers are almost done planting. Rains have been heavy at times, but all in all pretty good timing-wise.

This field was twin row corn and coming along nicely, with even stands and some moisture if you dig a little.

I was just in Marion County a week before and I was told this might just be the garden part of Ohio. This field was the most mature field I saw all day and had already been sidedressed.

Wyandot County has some spots that have had more rains than others. I found a field of corn that was well on its way and right across the road was a field that had just been planted. This could be sign of a bigger farmer needing to get in early and one that was alright with waiting a bit.

Hancock County was right with Delaware County in progress and growth in these fields.

Then I hit Wood County and the view changed dramatically, especially after I crossed Route 6. Nothing…absolutely nothing has been done to the majority of these fields yet. The brown ground was offset every so often by a sharp green wheat field, but that contrast made what is not being done in northern Ohio even more evident.

As most farmers in Ohio have crossed the finish line for the 2018 planting season, many farmers in northern parts of Ohio will be in an entirely different race over the coming days; a race against the crop insurance dates (June 5th for corn and June 20th for soybeans).

Despite the late start just a year ago, farmers in this region had very little to complain about when a bountiful harvest followed. Here’s to hoping history repeats itself for them this year.

May brings progress with fieldwork and planting