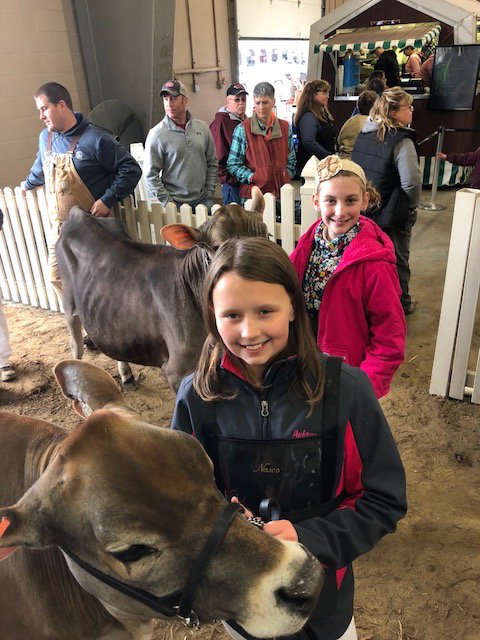 Though dairy prices continue to be serious concern, it did not slow down participants and exhibitors at the 2018 Spring Dairy Expo at the soggy/chilly/sunny/cloudy end of March.

“At the beginning of March, entries were well over 670 head entered with an additional 200-plus sale animals featuring all breeds. We were pleased to see numbers holding steady with some increases in some of the breeds,” said Angi Kaverman, Spring Dairy Expo show manager. “It has not been intolerable weather this year. The rain has not been the best but we’ve at least had decent temperatures. We started our event the morning of March 29 with the youth judging contest and we had 190 youth at the contest, which was an increase from previous years. We feel by moving that to kick off our event we generated a little more traffic flow as well as excitement from being involved.”

The Stark County Senior Team won the Ohio 4-H Dairy Judging Contest at the event. Sydney Daniels from Stark County was the high individual. While the youth were highlighted and recognized, there is much more at the event that includes aspects of all things dairy in Ohio.

“We’re very fortunate with the Spring Dairy Expo because this is a venue where we try to encompass all facets of the dairy industry. We have an all-breeds youth showmanship contest that the American Dairy Association sponsors. All kids ages 9 to 21 can participate in that. You don’t even have to own or exhibit the animal here — they can use someone else’s animal to do that. One of the really special features is that ADA pays each participant $20 and we have classes respective to their ages with prizes involved,” Kaverman said. “In addition, there are sales with all breeds being represented. Those bring in people for show type animals as well as production type animals. It is a little bit of every thing here. We have baby calves, project calves for kids as well as milking animals. A lot of this is about fun, love of the industry, pride, and family involvement and participation. Probably 90% of the people here are doing this because they love this and they want their children to benefit from the experience. Winning is always fun but they know that the pride and work ethic those kids have gotten — from this industry particularly — creates some of the most employable kids for the future.”

All exhibitors are focused on the ultimate goal of being named Supreme Champion in the show that includes dairy animals from multiple states.

While there were plenty of opportunities to celebrate and enjoy Ohio’s dairy industry, there were looming concerns about the challenge of prices.

“Unfortunately the price of milk is a topic of conversation and it is not the most positive conversation to have,” Kaverman said. “We all keep doing this because we love it. We are hoping for that turnaround.”