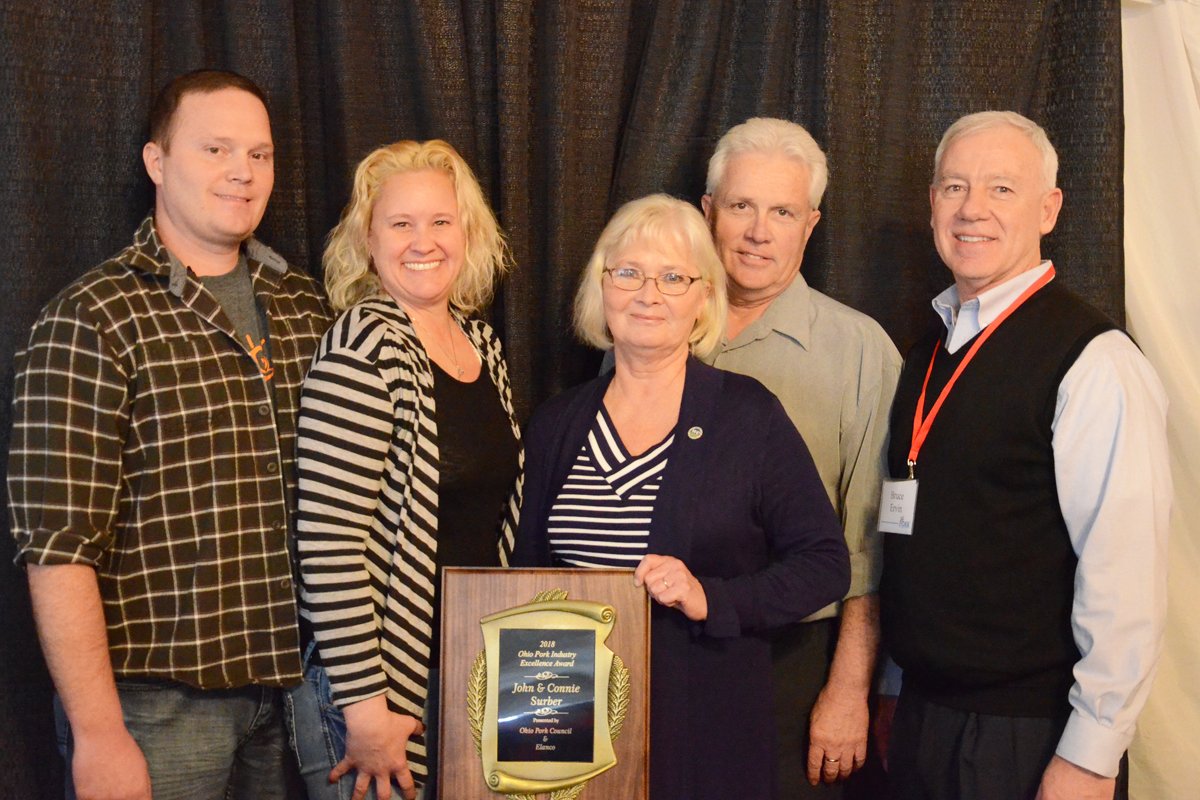 The Surber family was recognized with the Industry Excellence Award.

The Ohio Pork Congress had the largest attendance in several years since it moved to its Columbus location.

“We’ve been blessed to have good participation over the past several years and this is a record for the last 10 or 12 years,” said Rich Deaton, Ohio Pork Council president. “We had over 500 pre-registered and that is due to the event planning committee. It just goes to show that if we get the right program and right presenters here, people will come and benefit from what they have to share.”

The event followed the Tri-State Sow Housing Conference held the previous day and the topic was a natural topic of conversation as the 2025 deadline for implementation of the Ohio Livestock Care Standards Board sow housing requirements draws closer.

“One of the things that is on our minds here in Ohio is the magic number of 2025 when the sow housing changes have to be implemented. We have many exhibitors here that will help producers be able to retrofit their barns and make the transition to meet the Ohio Livestock Care Standard Requirements here in 2025. It is a big deal,” Deaton said. “We had good participation at the Sow Housing Conference. We heard from people who have already made the transition either with a new building or retrofitting an existing building. They shared some things that they learned and hearing about that hands-on experience really helps.”

Another topic of discussion was the strong demand for pork.

“One of the things I have been impressed with over the last year is that domestic consumption is up. It is getting close to 52 pounds consumed per person, that is getting close to a high for us,” Deaton said. “Bacon has always been popular, but it is more popular now than it has been. Bacon has been really hot but loins have dropped off. Loins used to be our leader but now ribs and bacon are the leaders. As we got that pig leaner, we also leaned up the bacon and made it a better, more appealing product than 20 years ago. We have to get used to the shifting consumer demands. My goal is to work to get the loins back up to where they were and keep the bacon where it is.”

Ohio Pork Congress attendees also got a legislative update, a PRRS Mapping update, a report on global trends in protein consumption, a water quality update, and an overview of manure application research.

For the past five years, Glen Arnold with Ohio State University Extension has conducted research on methods of sidedressing liquid manure. Initially, he used a tanker filled with liquid manure that was applied to young corn fields in several western Ohio counties. But the dragline and manure sidedress toolbar, compared to a tanker, weigh less and are faster and more efficient, Arnold pointed out. Also, the dragline and toolbar cause very few plants to be crushed to death. OSU research has found manure sidedressed fields produced 13 more bushels of corn per acre compared to fields where synthetic fertilizers were applied saving about $80 an acre, Arnold said.

“There’s always a cost to the livestock farmer to apply manure to farm fields. By capturing more of the nitrogen in the manure, the farmer can reduce the need to purchase commercial fertilizer and make a bigger profit,” Arnold said.

Attendees also heard a National Pork Board Update from Bill Even, CEO, National Pork Board, Des Moines, Iowa and an entertaining presentation from keynote speaker Rob Sharkey, a farmer and podcaster from Bradford, Illinois. Award winners, including the Industry Excellence Award winners the Surber family, were recognized as well.