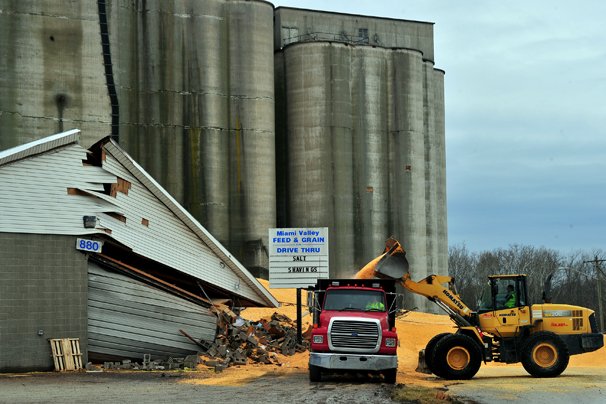 Clean up continues after massive grain spill in New Carlisle

The Sutherly family owns Miami Valley Feed and Grain in New Carlisle where a grain tank collapsed late on Jan. 21, spilling around 365,000 bushels of corn worth over $1.25 million.

“The tank gave way and the impact of the corn caused the nearby transformers to explode,” Sutherly said. “Our renters there at the elevator — there is a house on the grounds — said it sounded like a jet airplane was coming in and she looked out and all the corn was laying on the ground. The tank was built in 1968 when the government wanted to do some government storage. It was full. It was 72-feet tall to the edge and then an additional 20 feet tall to the peak of the cone.”

The wave of corn washed over the grounds, leveled multiple buildings and buried Route 571. The road had to be closed. Power was lost but restored fairly quickly by Dayton Power and Light.

When Sutherly arrived at the scene after that ominous late-night phone call, he was prepared but still surprised at the magnitude of the problem.

“I had an idea of what I’d be walking into. I knew it would be catastrophic, but when I got here I was shocked,” Sutherly said on Jan. 23. “We were very fortunate that no one was here working. It couldn’t have happened at a better time. At 11:40 on a Sunday night there was little to no traffic on 571.

“You never know when you walk into a situation like that where to start. It is like putting a puzzle together. We just brought some big square straw bales from our farm in to make a retaining wall to keep our feed mill facility cleared. We started with two dump tracks and pay loaders piling corn. We eventually brought in track-hoes and two more dump trucks. We have been trying to run them 24-7 to get the road clear. We’re trying to tuck corn anywhere on our property we can. We are pretty close to getting the road open here soon.”

The family got started with the business 23 years ago when the Sutherlys bought the local elevator.

“My brother Jim left his Extension job to start at Miami Valley Feed and Grain to learn grain marketing. After college I came back and started running the fertilizer business and trying to expand that. Jim handled nutrition. Then we incorporated my younger sister Molly and my younger cousin David and he runs the grain facility. Molly keeps everything straight and my mother works here part time too. It is a family business,” Sutherly said. “The growth on the grain side has been due to some local closures and co-op mergers. A lot of feed facilities have shut down and we are one of the few feed facilities that still custom mix and we have grown through word of mouth. We try to treat everyone with respect and give them the best service we can.”

Sutherly said the response from Feed and Grain employees and the farm community has been incredible following the incident.

“My employees are very loyal. They came out to help and one told me that he was either going to lay in bed or cry, so he might as well help. It has been phenomenal the people who have reached out to us,” Sutherly said. “It makes me feel really good. I have friends that work in the co-op system at Heritage and Sunrise, and they might be competitors, but they are great friends and they have reached out to us to offer help. They have been through some problems throughout the years and they have some experts on handling these situations. I think of that commercial with Paul Harvey about ‘When God made a farmer,’ well God made some courageous farmers who are really good people.”

There is more good news from the terrible situation.

“The corn is salvageable. The salvage company is in here right now. They analyzed it and they say 80% of it is salvageable. The corn in that tank was in excellent condition. It was cooled down and dried appropriately so there was no issue with the corn. That is a good thing,” Sutherly said. “We do carry insurance and have a nice policy and it looks like we will be very well covered. The grain is covered, the facilities are covered and it looks like we’ll be able to rebuild and make our place a little more user friendly. To be honest, it wasn’t a very user-friendly place for semis. There was a lot of backing and turning sharp corners. Our focus is to rebuild and continue to serve our customers. We know they’ll have to be patient to let us get to that point. Obviously it will be a long process to get there.”

Sometimes, a catastrophe can be a miracle too.