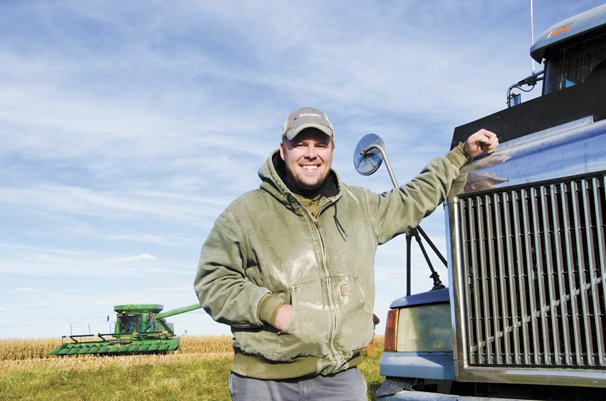 It was a long and challenging 2017 for Zach Profit and his family on their Van Wert County farm.

It has been a very long planting season, which set the stage for a long 2017 for Zach Profit and his family on their Van Wert County farm.

“I’m 29 and in my short career, 2017 was the most challenging spring I have ever been a part of, my dad said so too. It was a year of small windows. We got a lot of 3- and 4-inch rains early. Then we got 6 to 7 inches in 24 hours when the crops were very small. It was devastating. We finally finished planting the first week of June. This was the most replanting we ever had. We had places replanted two and three times. Our insurance agent said it was the most replanting he had ever seen. Once we got the crops in and established, they were all over the place in development and the field work all ran together,” Profit said. “We got started planting the last couple weeks of April and then finally parked the planters in the first week of June. Then we went right into wheat harvest, then fungicide application, and then late season nitrogen applications with Y-Drops right into installing drainage tile, right into harvest. It was quite a year. My brother and I have little kids at home and it was a long year for our wives. This was the year that our wives didn’t see much of us because we were busy from planting through harvest, and it’s not over yet.”

The Van Wert area has had multiple challenging years in a row.

“They each had their own set of challenges. We had good years in ‘13 and ‘14 then we had flood, drought, flood. In ‘15 there were places around here that had 30 inches of rain in June and early July. We couldn’t finish sidedressing because we were so wet for so long. As the year went on things were in bad shape and the corn yields were terrible,” Profit said. “In 2016 we got off to a decent start but then a good drought settled in mid summer and the corn never recovered. The corn was below average but the beans were pretty good because of some late rains.”

Hopes were high for a good year of production in 2017 as planting season got started, but heavy rains quickly watered them down. The abundant moisture early in the season made systematic tile important on many Ohio farms this season.

“Tile was pretty critical this year. You could have drawn a lot of tile maps by hand. You could still see the waves in the crops from the combine this fall — it was unbelievable. After two bad years in this area, a lot of guys wanted to make sure to do everything right this spring, but just getting the crops out was a titanic effort. And that was just the first time,” Profit said. “But the replanting paid off. The places where we replanted yielded better than where we didn’t. We wish we would have replanted more.”

Like the planting season, a great stretch of weather allowed for an incredible harvest window in October, but the window abruptly shut when persistent late October and early November rains halted harvest progress.

“We have had some good dry windows this fall but had to deal with some small rains and this last big storm that went through on Nov. 5 put the brakes on harvest. Right at the farm we got an inch and a half and further north they got 3 to 4 inches,” Profit said on Nov. 7. “We started with soybeans then switched to corn. We finished soybeans before Halloween now we have half of our corn done and it looks like we might be able to get back in the fields soon. We feel like we did get lucky where our farm is. We missed some rains early and got some rains in the summer. We were cool and dry for quite a bit of August, but before that we caught some rains that others did not. Soybeans will be average to below average in the upper 50s — around 58. Corn has been all over the place and we are around a 200-bushel average, which is pretty excellent and above average.”