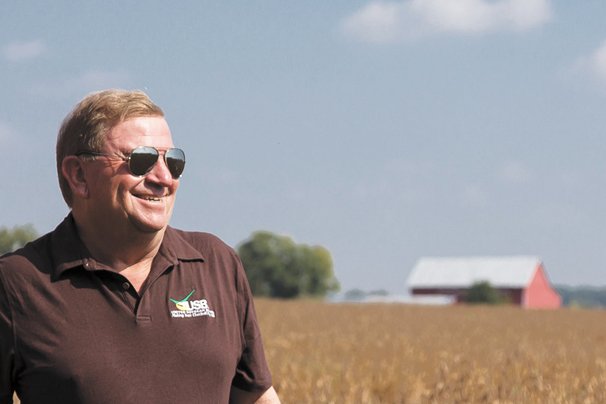 John Motter from Hancock County is finishing up his term as chairman of the United Soybean Board. Photo by USB.

In 1979, John Motter learned some hard life lessons when he was 25 and he lost his father in a farm accident.

“I got to work with my dad for a couple of years and I learned a lot but there was so much more I needed to learn from him. From the time my dad was killed and his funeral we had 22 litters of pigs on the farm. It was the middle of farrowing season. Neighbors would come over and help, but once the funeral was over I had a lot of work to do. I had a farrow to finish operation with 95 sows and I did everything with a scoop shovel. We also had a cow calf herd and were farming around 300 acres,” Motter said. “The big life change for me then was that Dad always worked hard and he had the dream that as he got older, he could travel with Mom to Alaska. He worked his tail off and didn’t enjoy the journey. He kept putting it off. The life lesson to me was, don’t put it off. Money is not everything. To accumulate the next farm or get a better place to live didn’t serve my father very well. To get experiences and enjoy every day while you’re here — that’s what is important.”

That philosophy has helped to take the Hancock County farmer to a position no Ohioan has ever before held: chairman of the United Soybean Board that oversees the soybean checkoff at the national level. Motter, from Jenera, started his term last December and has since traveled the world on behalf of soybean growers in the United States. He will transition to the role of past chairman in December.

“I got started with the Ohio Soybean Council after serving on the Soil and Water Board with Kevin Flanagan. He was on the Ohio Soybean Council board and he approached me with the opportunity to serve on the board to replace him in the early 2000s. I’ve been on the board since. Eight years ago I got my opportunity to be appointed to the United Soybean Board. The Ohio board makes a nomination, and then you have to fill out an application. The appointment comes from the Secretary of Agriculture through USDA. They look at the applications and our resumes,” Motter said. “Once on the board, there are 73 directors with 11 on the executive committee — 10 elected plus the past chairman. Then you can run for an office and the board elects the officers. I ran one year for executive committee and then I ran for vice chair and finally chair. It is a one-year term.”

Once elected, Motter went straight to work making a long list of appointments for various roles in the United Soybean Board and setting goals for the coming year based on the direction the USB wants to go. For Motter the goals were:

3. Replacement of CEO John Becker after his retirement;

In terms of moving forward with those goals, Motter said it has been a productive year. The USB named Polly Ruhland the new CEO effective on Nov. 1, 2017. Ruhland formerly served as the CEO at Cattlemen’s Beef Promotion & Research Board.

“Polly exceeded all of the attributes for what we as a board were looking for in a new CEO to lead us into the future,” Motter said. “Polly brings a platform of experience and expertise that parallels the opportunities and challenges facing the soy industry — building demand in domestic and global markets, creating consensus throughout the commodity supply chain, solidifying partnerships with national and state organizations and being an industry catalyst.”

Ruhland’s transition into her new role is a work in progress.

“We are still working on this, but we are in a really good place right now,” Motter said.

In terms of soy meal enhancement, work is also ongoing. Animal agriculture is U.S. soy’s No. 1 customer at home and abroad, and both industries rely on this strong relationship. Though soy meal faces competition from alternative feed ingredients and other countries that are producing more soybeans, the checkoff works hard to protect U.S. soy’s share of the animal feed market.

In terms of the oil, Motter was a national leader well before his term as chairman began. He is no stranger to specialty crops. In the years following his father’s death he grew sugar beets and some popcorn. Now, all of the soybeans he grows are high oleic.

“It is what the consumer needs. We have to be more focused on the end user. It is not enough to just grow a lot of something, we have to grow to meet the demand,” Motter said. “We have to win back our share of the market and own the domestic oil market, we have to figure out how to best do that.”

“In ‘06 we had 82% of the domestic market share with soybean oil and we needed to find ways to hold onto that market. The first thing was the low lin program. When I first heard about low lin they thought we wouldn’t be able to manage the potential for insect and disease problems here in Ohio. I was insulted by that and I wanted to grow about 100 acres of them but I had to figure out where I would take them. Brian Welly, a local Pioneer dealer, found an interested elevator willing to step out of the norm and in a three-week window we went from 100 acres to 5,000 acres in the Jenera and Marion areas. We went from that to Ohio being the No. 2 grower of low lin beans and we had 20% market share as a state out of very humble beginnings,” Motter said. “The low lin beans had some yield drag but I personally didn’t see it. That became the problem though. It was developed so quickly that breeding technology couldn’t catch up. We grew low lin beans in Ohio for four or five years and the crushing industry didn’t want to handle those any more and the program dried up almost over night.

“We were sitting on the sideline then for a couple of years and allowed other oils to take over some of the market share, especially the solid cooking fats like margarine. Palm came in and took over that market share and we were importing oils from parts of the world that didn’t care much about tearing up rain forests and planting palm trees. The first year for high oleic was 2011 and there were 12 growers in the country and they were all in northwest Ohio on 2,500 acres. We did the product launch in 2011 from my farm shop. Now we are up to 600,000 acres in 12 states. Pandora Grain offered 8,500 acres in high oleic contracts for this year and the contracts were filled in two days.”

More end users are discovering the benefits of the high oleic oil and yield drag has not been an issue, Motter said. The biggest challenge now is the global regulatory environment.

“We do not want to put a specialty trait out into the global markets before it has global regulatory approval,” Motter said. “The holdup right now is in Europe. Monsanto’s Vistive Gold trait is fully approved but Pioneer still needs the dual approval of the combined Plenish and Roundup Ready trait. Each of those traits have been approved separately but not together. Monsanto’s Vistive Gold has total approval.”

Many of Motter’s high oleic beans go to Anderson, Ind.

“It takes 180,000 acres of high oleic soybeans to make the Coffee-Mate creamer made in Anderson,” Motter said. “That is where a bunch of these beans are going. I’ve toured the Nestlé facility there and it is amazing. That is how food production works. If I want cream in my coffee it has to come from somewhere. Half of the Coffee-Mate in America is made there.”

His role as the USB chairman gives him a larger audience to share the benefits of the crops he grows on his Hancock County farm and the lessons he has learned there. And whether he is meeting with industry leaders in Jordan, talking with end users in China or sitting in the combine cab in Jenera, Motter continues to appreciate every day and live life based on hard lessons learned in 1979.

“You don’t ask why, you simply go from where you are,” he said. “Continue to do what you love and carry on what dad taught.”