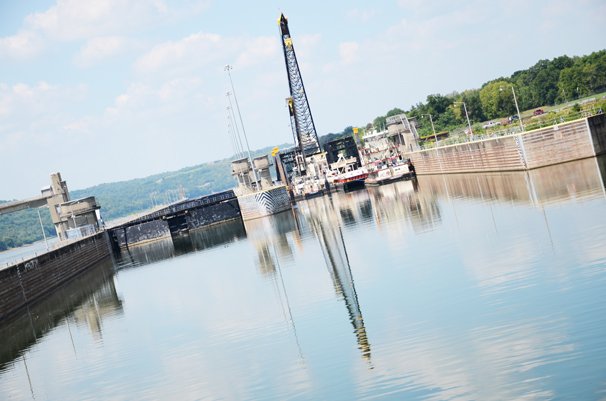 This lock on the Ohio River lowers barges around 25 to the water level below the dam.

For years there have been growing concerns about the aging system of locks and dams on the U.S. inland waterway system. Agricultural exports are heavily dependent on properly functioning locks and dams.

This week there was an example of the problems that can quickly develop. The Ohio River was closed Monday following lock failures near Brookport, Ill. According to the Waterways Council more than 65 towboats were backed up “like a massive truck wreck along an interstate corridor” that stretched for nearly 50 miles.

“Lock 53 is the last lock and dam before the Ohio River meets up with the Mississippi River so it is really one of the most critical links in the overall logistics chain, not only for agriculture but for a host of other industries. A lot of volume goes through that stretch of the Ohio River,” said Mike Steenhoek, executive director of the Soy Transportation Coalition. “There was a mechanical failure at the lock that transpired on Oct 1. It has been reopened to traffic — that occurred about midday on Monday Oct. 2. Operations have resumed but it happened at a pretty seismic point in time with harvest in the early stages. There is a lot of river traffic right now. If you simply have a shutdown, even of limited duration, it shows how things can stack up and back up.”

The closure of Lock 53 follows another failure at nearby Lock 52. Both locks have been in service since 1928 and are expected be replaced by the Olmsted Lock next year and removed.

Steenhoek said backups like the one resulting from the Oct. 1 failure can be costly for farmers.

“As a result we saw grain elevators widening basis. Farmers are the ones who pay for freight, and when you have a breakdown of some sort, the usual consequence is that farmers get paid less. Those costs are not passed down to the ultimate customers,” he said. “It reinforces the need to have a logistics system that is high functioning and reliable for farmers and a host of other industries. For us to be profitable and competitive in the global marketplace it is not just a function of growing what customers demand, it is also very much a function of getting it there. These inland waterways allow that production to get there. It allows us to meet customer demand and it really has a positive impact on profitability so we have to take care of these things.”