Lessons of life are sometimes found in the strangest of places. That was the case for a group of Idaho ranchers in the 1950s that found a mysterious case of cyclops lambs among their sheep. That’s right — one-eyed mutant lambs were being born.

An interesting video on the subject from the folks over at TED-Ed (the same group responsible for TED Talks) goes into further detail. It’s available below and I encourage you to take a moment to watch it.

Long story short — the effort by the farmers to report their deformed lambs to scientists at the USDA led to a long line of discoveries that eventually resulted in the identification of a relationship between a plant compound — cyclopamine — and proteins instrumental in the biological development process. With the mystery of the cyclops sheep having been solved, scientists took the lessons learned and applied them to humans.

Basal Cell Nevus Syndrome is a group of defects caused by a genetic condition. It just so happened that the protein relationships studied in the sheep mutations were also at the root of the Syndrome, which partially predisposes people to certain cancers.

Though cyclopamine wasn’t the right compound to help people out, closely related molecules were the answer and new treatments have been made available in skin cancer medicines during the last five years as a result of the finding.

The story hits close to home for me as I have wrestled with skin cancer (a different form than assisted by the treatments described above) at a relatively young age. How cool that the extra effort by farmers to keep their livestock healthy has helped people afflicted with something well beyond their control?

Don’t underestimate a seemingly odd occurrence. Investigate it until you understand it, and who knows — maybe you’ll save some lives along the way.

Also, if your livestock are being born with a mutation, be sure to get that checked out. 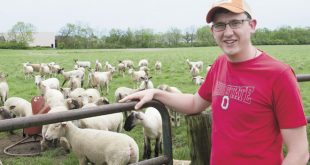 The American Lamb Board (ALB) elected FY2020 leadership at its meeting Jan. 22, held prior …