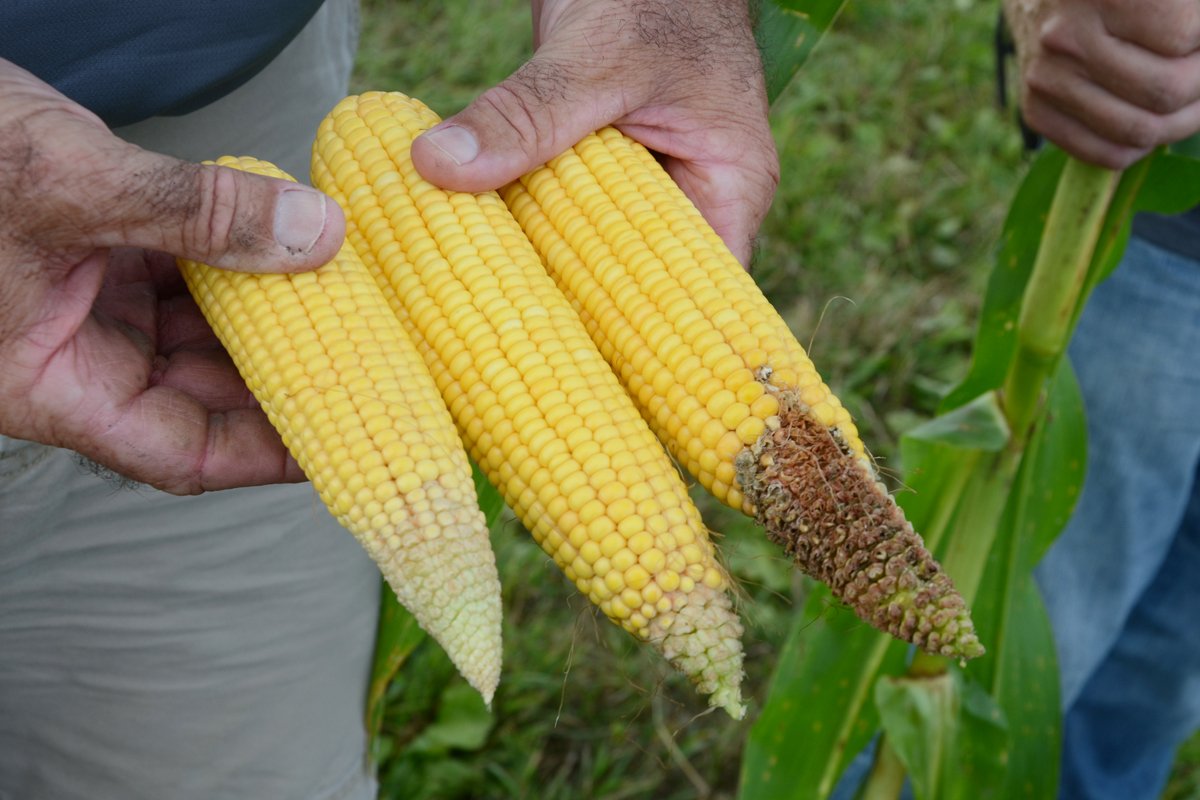 As fall approaches and growers gear up for harvest, it is important that they continue to monitor and scout fields as crops reach maturity. Although at this point in the year it is too late for management practices such as rescue treatments, fungicides, etc., there is still a great deal to learn by walking through fields.

With wet weather throughout the growing season, several diseases have developed in both corn and soybean fields across Ohio. For corn, there has been a higher incidence of common rust throughout the state. As of mid-August, southern rust has been discovered in some southwest Ohio corn fields. Gray leaf spot and northern corn leaf blight have also appeared in Ohio’s corn fields.

In soybeans, diseases such as frogeye leaf spot and bacterial leaf blight have developed in many fields throughout the state. As growers walk fields this fall, they should take note of what diseases are present and make plans to deal with problem diseases either through management practices this fall and spring or with varietal selection for the 2018 crop.

While scouting fields, and observing the crop development above ground, it is also a great idea to spend some time investigating what is going on below the soil surface. Taking time to dig up roots will help growers understand soil conditions in their fields, root development of crops, potential pest problems, and determine if any compaction exists. With the wet spring weather, heavy rain events, and field work performed in marginal conditions, there may be some areas of fields where compaction needs to be alleviated. Growers can determine if they may have soil compaction by digging roots up in several areas of fields, especially wet areas where water ponded this spring.

As fall approaches growers should also be aware of weed pressure that exists in their fields and make plans for fall herbicide applications. As weeds become more of a challenge to control, both growers and agronomists have observed the benefits of fall applications of herbicides. Growers who routinely apply herbicides in the fall have a better chance of maintaining weed-free fields the following growing season.

One final concern that growers should take note of as corn begins to mature is possible nitrogen deficiencies. Due to heavy rainfall and saturated soils during the 2017 growing season, it is not surprising to see some signs of nitrogen deficiency showing up in corn fields across the eastern Corn Belt. Whether applied preplant or sidedress, patterns of heavy rainfall and wet soils increase the likelihood of nitrogen being lost. Because nitrogen is an essential nutrient for corn plant development and ultimately yield, losses will impact final yields this fall.

When saturated conditions persist, nitrogen can be lost though leaching or denitrification. Leaching (more likely to occur in course-textured soils) is the process where nitrogen is moved down through the soil profile and out of the root zone where it is not available to plants. The severity of nitrogen loss due to leaching is impacted the intensity and duration of rainfall. Denitrification is the process where soil nitrogen is biologically converted to gaseous nitrogen and lost to the atmosphere. During denitrification, microorganisms break down soil nitrogen and convert it to nitrogen gas when soil is saturated and oxygen is limited.

Nitrogen deficiency symptoms initially appear as a “V” shaped yellowing on lower leaves that begins at the tip and progresses toward the stalk. Nitrogen deficiency can also cause ears with tip-back, poor kernel set, and shallow kernel development. Fields that have experience excessive rainfall, ponding, and saturated soils could be exhibiting the symptoms discussed above.

The 2017 growing season has been extremely challenging at times. Although everyone is looking forward to moving on to next year, it is important to take some time walking fields this fall in order to make sound management decisions that will ensure productivity next year.