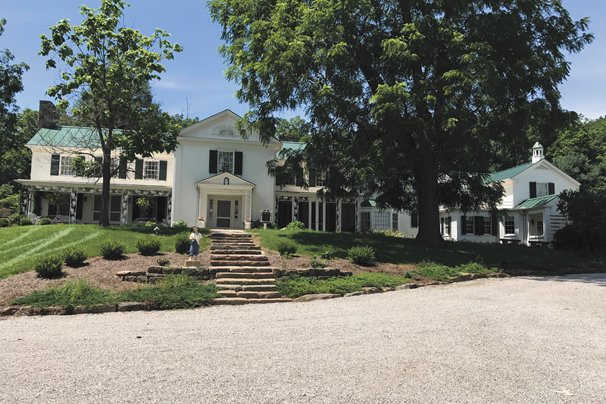 The Big House, the Bromfield family’s opulent and artful 32-room home, can be toured for $5 per person.

A somewhat obscure name today, Bromfield was a prominent celebrity and artist in the first half of the twentieth-century, gaining international acclaim for his novels. The artist earned much of his fame whilst living abroad in India and France, and when World War II came to France and Bromfield returned stateside, he purchased several farm tracts in the Pleasant Valley area of Richland County and there established and nurtured his dream farm, Malabar Farm.

Upon purchase of these lands in 1939, Bromfield became somewhat disinterested in writing fiction when rejuvenating his farm and promoting new agricultural philosophies became some of his main passions and life’s works until the time of his death in 1956.

In his book Out of the Earth, Bromfield said that, like much of America’s agricultural lands in the early twentieth-century, at Malabar Farm, “These hills had been corned out, farmed out, pastured out, sheeped out, and abandoned.” And he wrote in the book Pleasant Valley that he “wanted to prove that worn out farms could be restored again.”

The Malabar Farm Foundation said that “Bromfield set out on a quest to restore rich fertility to Malabar Farm by applying conservation methods that were mostly unheard of or little used at that time. Bromfield shared these conservation methods with people from all over the U.S. and other countries through speaking engagements, a newspaper column, radio broadcasts, and printed materials including a series of non-fiction ‘farm’ books.”

Bromfield’s writings about farm life and public advocacy for new farming techniques spurred the “New Agriculture” movement. Many of the farming techniques championed by Bromfield have become unquestioned common practice, but at the time, these concepts were largely untried and unfamiliar. Bromfield writes in Pleasant Valley that he is an advocate of “contour plowing, terrace ditches, cover crops, strip-cropping, fencing cattle out of wooded areas, disk-plowing, reforestation, farm ponds.”

Bromfield used Malabar Farm as a place to experiment with, put into practice, and showcase his farming philosophies. The farm was also used by the government to test soil conservation practices. Bromfield states in Pleasant Valley that he sees Malabar Farm as a “pilot farm” for certain government programs: “demonstration farms privately operated upon which sound conservation practices are used have proved strikingly effective as examples, more effective than pamphlets, books, or even government experimental stations, for on them neighboring farmers are able to see unmistakably the gainful aspect of proper soil and forestry practices.”

Clearly, this beautiful farm in the hills of Richland County served several purposes and was more than just a bucolic retreat for a wealthy writer. Contemporary Ohio author Gene Logsdon rightly noted that there were two sides to Bromfield: the reflective writer/farmer and the exuberant, famous, socialite entertainer who used Malabar Farm to host extravagant galas for rich and powerful Hollywood and political elite; additionally, he was visited at the sprawling property by throngs of fans. Bromfield was a showman and his farm was his “showplace.”

In its heyday, Malabar Farm was known as “The Most Famous Farm in America.” And indeed, visitors to Malabar Farm State Park see the life and passions of Louis Bromfield showcased for them over the course of an afternoon’s visit. A few short hikes and a couple of naturalist-led tours give visitors insights into Bromfield’s farm life, family life, and star-studded social life.

Parts of this state park remain a working farm (as per the Bromfield family’s stipulation when the property was transferred to the state in 1972) and an inexpensive farm tour ($3 per person) on a tractor-pulled wagon ride takes visitors around the beautiful croplands and pastures of the park, where they hear about Bromfield’s agricultural mission and learn about his legacy from a well-informed park naturalist. Meticulously cared for barns and outbuildings, some of which continue to house livestock, dot the grounds, adding to the pastoral feel of this state park. In the gift shop, patrons can purchase select cuts of beef from Malabar Farm cattle and fresh vegetables can still be bought in season from the quaint, shaded produce stand and natural spring that Bromfield himself used to peddle his goods.

The Big House, the Bromfield family’s opulent and artful 32-room “farmhouse,” can be toured for $5 per person. While discussing Bromfield’s biography, a naturalist takes group tours through the home, which remains much the same as it would have been at the time of the Bromfield’s residence there. The Big House features unique room design, architecture, and artwork, as well as beautiful views of the farm and countryside from the comfortable studies, libraries, and rooms that were once graced by all of Hollywood’s top stars (Humphrey Bogart and Lauren Bacall were married and honeymooned here, for example). The tour is a lesson in worldly luxury and country charm.

For a meal, folks can dine at Malabar Farm Restaurant or pack a picnic lunch, which can be enjoyed in a large, quiet picnic area back in the woods or at the picnic tables by the Visitor’s Center, which has several exhibits devoted to natural history and Bromfield’s agrarian vision. For those wanting to stretch their legs, Malabar Farm has several hiking trails that wind through the hilly, sometimes rocky terrain surrounding the farm, which is just a stone’s throw away from popular Mohican State Park. There is also a seven-mile bridle trail that rings the park and a primitive horseman’s campground and a B&B-style hostel, should visitors want to stay the night.

Farm (which are all available at the gift shop), his profound respect for the farmer and his deep love of the Ohio countryside become clear. Louis Bromfield was a defender of the farmer, a champion of wise use agriculture, and a promoter of the pastoral ideal who believed, from a literary standpoint, “a man writes better in the country.”

Throughout Bromfield’s literary canon, he depicts the job of farming as the most honorable and inspiring of professions. In Bromfield’s literature, the farmer is a timeless figure of almost heroic importance that possesses keen insight and intellect.

“Rarely does the good farmer long for any immortality better than the rich fields he has left behind him and the healthy, intelligent children who will carry on his work and his name,” Bromfield says in Out of the Earth. “There is in all the world no finer figure than a sturdy farmer standing, his feet well planted in the earth, looking over his rich fields and his beautiful shiny cattle. He has a security and an independence unknown to any other member of society, yet, unlike the trapper or the hunter, he is very much a part of society, perhaps its most important member.”

A pilgrimage to Bromfield’s pastoral estate is a venture rich in agricultural and literary history. More information about Louis Bromfield and Malabar Farm State Park can be found at malabarfarm.org.