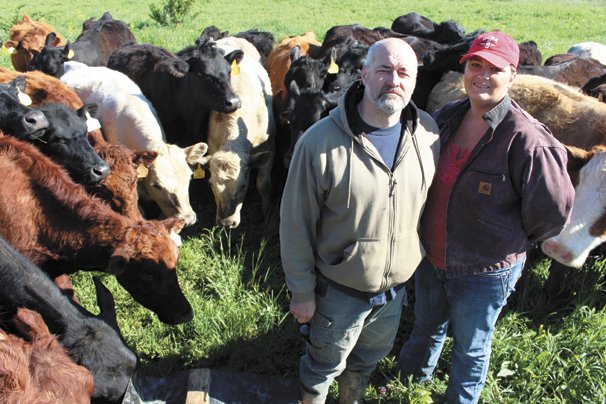 Jeff and Michelle Ramseyer raise around 250 cattle in an organic rotational grazing system with neighboring grain farmer in Wayne County.

Ramseyers using nature as a blueprint for beef grazing

For thousands of years livestock roamed the plains and forests and contributed to an ecosystem that produced some of the richest soils in the world. More livestock producers are taking note of this system with a long history of proven success and working to implement it on their farms.

Jeff and Michelle Ramseyer raise around 250 cattle in an organic rotational grazing system with neighboring grain farmer, Dean McIlvaine. The Ramseyers provide the livestock and the labor while enhancing the fertility and controlling weeds on McIvaine’s farm ground for their Lone Pine Pastures operation in Wayne County, Michelle said.

“Dean actually owns the properties we have cattle on. We are a grass-fed operation. We started back in 2014 when we got the cattle. Dean is an organic crop farmer and all of the cattle are raised on organic grass. We do not feed anything other than hay and grass. Dean needed more fertility because his crops weren’t growing well. Jeff went to him and said ‘Hey we can get you more fertility, why don’t we start a grass fed operation?’ That is what we did,” Michelle said. “Our first 40 heifers were delivered in December of 2014 and we calved in March-April of 2015 and have gone from there. We graze on his cropland and we have about 200 acres of permanent pastures. We market our beef to Heinen’s Grocery Store and we have freezer beef we sell in the community. We also have organic raised pork in an open barn with outside access.”

Emulating nature is the goal behind the beef operation. The Ramseyer operation has drawn from the experience of Gabe Brown from North Dakota. Brown was a speaker at the Soil Health Field Day at the farm of Dave Brandt in early April where he shared about his work with regenerative agriculture involving crop and livestock production.

“No matter where I go, I am 100% confident that the principles I use to get our ranch to be an ecosystem in North Dakota are the same no matter where I’m talking. It will work on your operation. The principles are the same anywhere,” Brown said. “Nature has been around for thousands of years. That is the model we need to emulate. There is another way of doing things and the way I found that works best is nature’s way.”

Brown completely changed the way he was farming to put a focus on building up his soils rather than degrading them.

“In nature there is no mechanical disturbance. That is a fact. There is always armor on the soil surface. Nature tries to cover herself. Nature cycles water very efficiently. Through our farming practices we’ve destroyed that water cycle. We need to heal it. In nature there are living plant root networks and those networks are very efficient at building the biology,” Brown said. “The greatest geological force on earth is life itself. Plants take in CO2 out of the atmosphere photosynthesis occurs and a portion of that is translocated to the roots where it is leaked out as exudates. That is how all of us in production agriculture get our profits. We have to have that functioning properly to make a profit. Part of that root exudate is converted carbonic acid that breaks down the rocks to make nutrients available to the plants. It is the biology in the soil that makes nutrients available. The fungal network is also very important.”

“I grow things. I have a living plant as long as possible throughout the year on all of my acres,” Brown said. “We can grow soil much more quickly than the scientists used to think was possible.”

The Ramseyers have worked on developing a similar system with the neighboring organic crop farm.

“Basically this whole operation was designed by watching Gabe Brown videos,” said Jeff Ramseyer. “The main thing I like about his system is it’s so easy, so simple. We’re running roughly 250 head and it takes on a normal day an hour and a half. That’s moving cows twice a day, filling mineral, moving calves across wire — anything like that. It’s very efficient. For us, it’s just a part time job. If we were to translate it to an eight-hour day, we could run a thousand cows with basically the same operation. We do grass-fed, so there’s some two-year-olds out here. We’ve got cows on top of that. We don’t have fancy barns. We don’t feed any grain. Our cows are calved with nature basically in roughly the middle of May.”

The managed intensive rotational grazing system in the Ramseyer’s operation moves the herd between paddocks twice a day, at around 7 each morning and night. The double-wire perimeter fences keep cows contained while the single-wire, easily movable fences between paddocks brings ease to the job. It takes roughly 10 days for the herd to move completely through the rotation before coming back to the first field at a rate of 15 acres covered per day.

Jeff said for those interested in giving the system a try, startup is easier than most agricultural endeavors. 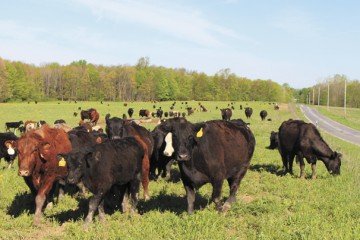 “If you want to start this, you need land but you don’t have to own the land. We don’t own this land since it’s in a partnership deal. But I think that’s where the biggest opportunity in Ohio especially is for guys who are running grain farms. Of course there’s no fence there so you have to do some work to do that,” Jeff said. “All this fence was built basically by me. It’s just a simple two hot wire system on steel T-posts. I believe there are roughly four to four and a half miles of fence here. Basically what we’re doing now is we took all of the rougher, wetter ground and that’s going to be our permanent pasture. What we were doing before is we took a field that was going to be corn and used that for the cows for fertility that year. This year we did that through the winter, but this land here will always be pasture from now on. There’s roughly 117 acres we’re using now. There’s a 58-acre pasture field we’re using on the other side that was a crop field that has cover crops on it but didn’t do so well since it’s so wet this spring. We’re waiting until the next pass through to graze that.”

Diversity is key in the system. Jeff and Michelle have recently added a flock of sheep that roam freely among pastures, though coyote and other pest problems plague newborns. Jeff also hopes to add chickens that will trail behind the herd. Cover crops are employed heavily with a mix of rye, wheat, hairy vetch, turnips, and more.

Having spoken at several Ohio agriculture events in the past, Jeff hopes to spread the word about his portable, low-input system of raising cattle. It’s not always easy, though.

“People just don’t like change,” he said. “But nature works.”