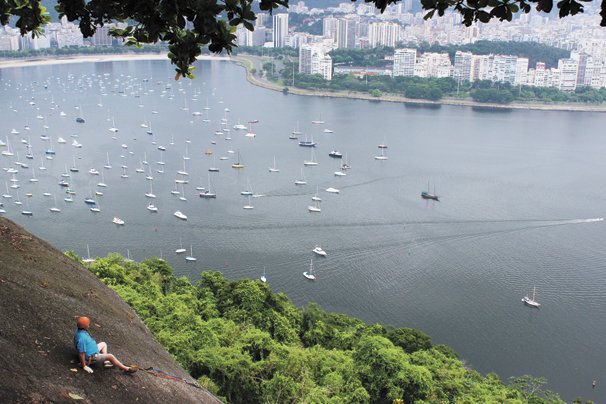 Les Imboden sits on a mountainside on a recent trip to Brazil, taking his own advice to travel and gain different perspectives. Photo by Stacie McCracken, Ohio Corn & Wheat Growers Association.

Our web site keeps track of the stories that generate the most interest and at the end of the year we like to review the top stories to gain insight into how to better serve readers of our web and print content and our radio listeners. Plus, it is always fun to see which story comes out on top. To revisit all of these favorite web stories and videos in the last year, look for “2016 top stories of the year” on the right side of this web page. In addition to these top posts, other noteworthy drivers of web traffic in 2016 included the Ohio and Pro Farmer crop tours, the Ohio State Fair livestock show results, and Between the Rows. Weather challenges, the tough farm economy, all things draft horse, and farm technology also garnered major web traffic in the last 12 months. Here are the 10 most popular stories of 2016.

This story early in the year laid out some of the specifics of new livestock rules for Ohio and the reasoning behind the rule changes. Unfortunately there were five Ohio Department of Agriculture investigations regarding livestock exhibition in 2015, up from three in 2014. In response to these types of problems, it seems that rulebooks get a bit thicker every year with regard to showing livestock and there were some notable changes last year. State Veterinarian Tony Forshey outlined changes with regard to drenching, tagging in livestock, the use of adhesives and others. Beef specialist John Grimes outlined a nice response to the rules too.

2. Tough lessons from the 80s for a new generation of hardships

A must-read for every farmer — Les Imboden is brutally honest about the tough lessons and realities on the farm through the 1980s. Farming offers a wonderful way of life, but many have learned the hard way that it must also run as a business. The 80s changed Les Imboden’s life and his advice can change your farming operation.

3. You’re teaching my daughter what in health class??

A misguided health teacher tangled with the wrong farm broadcaster when showing the film “Food, Inc.” to a sixth grade health class that included the daughter of Ty Higgins. Ty politely, but very firmly, informed the teacher and school administration exactly what he thought and he found a fairly receptive new audience.

4. The livestock barn of the future

“Monoslopes are the barn of the future,” said Francis L. Fluharty, research professor in The Ohio State University’s Department of Animal Sciences. “The design has the high side of the barn facing south or southeast, which allows the sun to reach almost all the way through the barn in the winter, having a warming effect on the cattle and keeping the bedding pack drier.”

Then, in the summer, most of the barn is under shade and the slope to the roof creates constant airflow through the building to reduce heat stress. The open design of monoslope barns is also beneficial in keeping cows dry and better suited to handle the wind.

One hot summer of dealing with the task of connecting his old 330 John Deere hay baler’s driveshaft to the PTO of his John Deere 6230 was quite enough for 80-year-old Roy Noel. As Noel was working on his rolling-hill farm in Pike County, he came up with a solution for this painstaking chore and a handy tool worthy of a U.S. patent.

In response to activists that petitioned to end a 50-year tradition of the “Catch a Pig” event in Wood County, Ty Higgins wrote an open letter encouraging the youth exhibitors to represent agriculture well despite the off-color picket signs and questionable tactics employed by protesters. This is definitely worth a read for all youth exhibitors both in Wood County and around Ohio.

In what was maybe my all-time favorite story interview, I sat down with runner Clayton Murphy just a few weeks before he left to compete in the 2016 Olympics. The former Darke County Fair and Ohio State Fair hog showman then went on to win a bronze medal. It was a real honor and privilege to meet this humble young man who represented Ohio agriculture in an impressive manner on the international stage.

8. If a farmer became President…

Though we tried to mostly stay out of the historically ridiculous 2016 presidential campaigns, it would be impossible to cover the last year of news without some references. Ty Higgins’ take on how things could be different if a farmer resided in the White House was a very popular post leading up to Election Day.

9. Honey I shrunk the combine

It seems like every farm show across the U.S. was unveiling the biggest and best technology and machinery agriculture has to offer, but at some of these shows farmers and farm enthusiasts alike were getting a glimpse at something a little bit tinier. Kansas farmer Alan VanNahmen has built one-quarter and one-third scale replicas of a John Deere combine. The idea came to VanNahmen as he was working at Machinery Link, a company that started as a combine leasing business to help reduce farmers’ operating expenses.

“The company I was working for was trying to shrink the cost of combines and harvesting, so I decided to create a quarter-scale John Deere combine to help get that message out,” VanNahmen said.

The FarmBuddy combine was born.

Joel Penhorwood cracked into the top 10 this year with his fascinating story on dairy farmer Ray Jackson in western Logan County who is looking to diversify his product with what may be a trend on the horizon for the industry — something called a2 milk.

Regular cow’s milk is about 85% water. The rest consists of lactose, fat, proteins, and more. About 30% of the total protein in that assembly is made up of beta-casein. Two variants of this protein are found in cow’s milk, a1 and a2. Cows are genetically predisposed to produce milk with either a1 or a2 proteins, though a new trend has recently raised the eyebrows of dairy farmers looking to cows that can produce a2 without any a1 beta-casein for a potential new niche market.