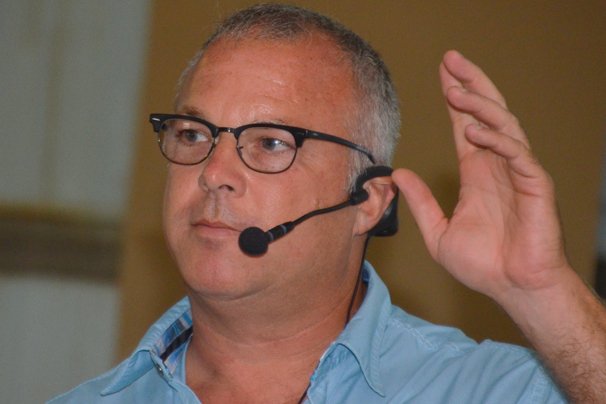 Understanding soil biology offers a competitive advantage on the farm

Much of the oft-touted American Dream is based upon businesses developing competitive advantages over their competition.

“If Ford and GM are competing to make the best car for the least amount of money and one of them has a technological innovation that gives them an advantage, the other is scurrying rapidly to one-up them and get back on top,” said Dan DeSutter, who farms 5,000 acres near Attica, Ind. and recently spoke at the Ohio No-Till Summer Field Day. “In farming there is a blissful adherence to tradition to want to do things the way grandpa did it. There are good things that can came out of that but we need to understand science better as farmers.”

For DeSutter, an understanding of the science of soil biology is the competitive advantage for his farm. He admits there is still much to learn in this area, but cover crops combined with livestock manure and no-till are important biological steps to transitioning modern agriculture from degenerative to regenerative.

“What we are doing is regenerating the soil and what others are doing is degenerative and is going to tear it down,” DeSutter said. “There are miners and farmers and there is a difference.”

DeSutter’s father had some bad experiences with cover crops in the 1980s and they were not really too interested in re-visiting those issues again until the advantages became accidentally apparent.

“Our entry into cover crops was quite by accident, like a lot of good things we discover on the farm. We were helping with a research project with Eileen Kladivko for Purdue. We planted when she said plant and sprayed when she said spray. We didn’t pay a lot of attention until one spring when I was out fixing tile and dug a hole, and at that time we were using annual ryegrass in the research. The ryegrass was about eight inches tall and I was down in the soil pit four feet deep and I saw roots coming out of the bottom. That really caught my attention. That was back in the day when we really focused on the physical — soil and biology weren’t really mentioned in the same sentence back then,” DeSutter said. “We had spent a couple of years tearing the guts out of a John Deere 4440 pulling an Unverferth Zone-Builder trying to get rid of our compaction down 12 or 14 inches deep, and here was a plant that for five bucks an acre just bored Swiss cheese holes through my soil four feet deep. That was a kind of ‘ah-ha’ moment for us and since then we’ve worked to where we try to have something green and growing on every acre every year all the time as much as the climate will allow. That was in ‘96 or ‘97.”

That discovery led to a long series of trial and error on the farm.

“We had a lot of misfires early. The ryegrass worked really well, but we had erratic success in getting it to survive the winter. We are far enough south we don’t get full snow cover in the winter, but far enough north that we still get the arctic blasts. When you get that artic blast with no snow cover, ryegrass doesn’t take it really well. We have migrated to other crops too,” he said. “Diversity is the whole key. We are trying to inject diversity into our system. If you look at the systems that created our soil to begin with — the native forests or the prairie — it is not uncommon to have 100 different species of plant in an acre. When you compare that to what we have today, we have obviously strayed pretty far from that and we see the evidence of that starting to catch up with us. Nature abhors a mono-crop.”

Crop diversity leads to increased diversity in soil life. Just a teaspoon of quality soil has more living organisms than the number of people living on earth. Those diverse organisms need variety to survive and thrive.

“Within the context of the cash grain system we use cover crops as a way to inject diversity into the system. We use all different kinds of plants but it is all dependent on planting date. We plant a lot more wheat now just so we can have the opportunity to plant a 12-way cocktail. That pales in comparison to nature, but that is a big jump from where we’ve been,” DeSutter said. “As it gets into September we still plant a three- to five-way cocktail and by mid-October we are pretty much down to cereal rye because that is about the only thing that will survive at that point. We are still looking for new things, especially a legume that we can plant later in the fall that will survive winter, but we haven’t found it yet.”

They have also shortened crop maturities to accommodate cover crops.

“We certainly are more interested in earlier maturing crops than we have been in the past. We have shortened our bean maturity from an average 3.0 to 3.9 to now we have a 2.7 to 3.4. With corn we are always looking for a new 107-day hybrid that can hang with the 112s and the 113s but they are rare,” he said. “You have to look at this from a holistic standpoint. Sometimes we sacrifice a little yield this year to help us out next year. You have to look at this long term. We have a lot of pressure to look at the bottom line one year at a time instead of really looking at a five- or 10-year period when you adopt a new practice.”

As the details of soil biology have been emphasized on the farm, the competitive advantages are becoming more apparent.

“Nine years out of 10, the limiting factor on our farm is water. It takes water to produce bushels and when you run out you’re done. For every percent of organic matter in the soil’s top 12 inches we can store an inch of water. Our soils started at 6% to 8% OM and now we are under 2% on a lot of that stuff,” DeSutter said. “We have documented that by adding cover crops in the last 10 to 15 years, soils that started at 2% and are now over 4%. Adding 2% organic matter back to the soil really helps when August comes and that inevitable dry spell hits. It’s like our farm gets two inches more than other farmers get. Some years that may not be worth a lot but some years it is worth its weight in gold.”

That increased organic matter also dramatically increases the amount of available nitrogen provided by the soil, allowing them to reduce nitrogen inputs by roughly $30 an acre. It also helps make better use of fertilizer applications.

“The best thing we can do to keep the fertilizer on the ground is to have something growing there all the time,” DeSutter said. “If there is something green and growing, fertility doesn’t leave.”

The improved soil biology also offers other clear advantages for farm profitability. At $4 corn, DeSutter’s soil health system budget leads to a per acre net loss (before land costs) of $17.92 per acre in the current challenging economic conditions. A comparable conventional system is losing $461.36 per acre with $4 corn.

“We like cover crops because they help us plant earlier. Nine times out of 10 we can plant before the neighbors because we are using that green growing plant to dry the soil out. We tend to plant green for that reason. The biggest challenge is the rare dry spring and we take too much moisture out for crop germination,” DeSutter said. “The best thing I can tell you is the county average for corn is 167 and our proven APH is 221. I think that speaks volumes. My crop insurance agent told me we have the highest APH of anyone he works with. I think what we are doing is clearly working and it has allowed us to make a land payment instead of a rent payment because of the advantages we have over others.”